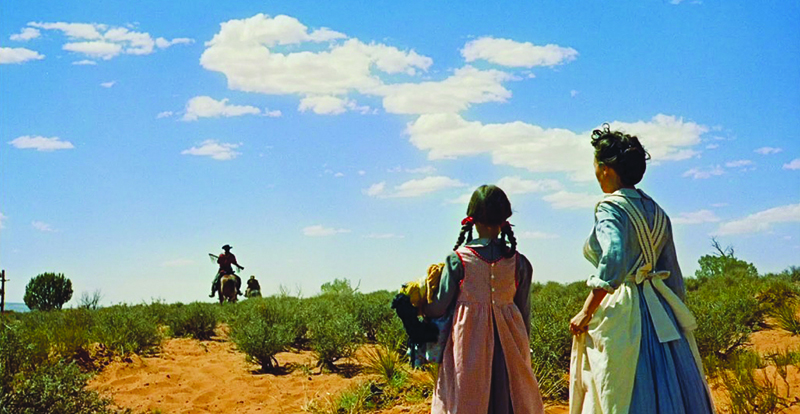 Without doubt, The Searchers has influenced more filmmakers than almost any other motion picture, with the possible exception of Citizen Kane.

Hollywood westerns made during the 1950s often featured former Confederate characters invariably depicted as recalcitrant loners carrying various levels of resentment and bitterness over the South losing the Civil War.

Among such Southern movie characters were Stonewall Torrey in Shane (1953), Benjamin Trane in Vera Cruz (1954), Colonel Ben Allison in The Tall Men (1955), and O’Meara in Run of the Arrow (1957). But the darkest and most memorable of these ex-Confederate characters is Ethan Edwards in John Ford’s cinematic masterpieceThe Searchers (1956).

Both Ford and John Wayne – in the role of the vengeful and bigoted Ethan – took a lot of risks at the time, as their film exposed America’s deeply embedded racism.

Today however, it is considered by most film historians and critics to be the director and actor’s greatest joint achievement, and Wayne’s finest portrayal of his long and outstanding career.

By the mid-1950s the western had become Hollywood’s most popular and reliable money-making genre. Consequently, John Ford and his producer, Merian C. Cooper, had no problem in selling a western movie script to Warner Bros. With John Wayne also hitched to the project, the studio provided Ford with a generous $2.5 million budget.

Ford, with Frank S. Nugent, had developed the screenplay based on Alan LeMay’s novel The Searchers, which had its roots in the true story of the kidnapping of nine-year-old Cynthia Ann Parker by Comanches in 1836. Filling the rest of the cast with his “Stock Company Regulars”, Ford began location shooting in his beloved Monument Valley on the Arizona/Utah border in June 1955.

Ford set his story in Texas, 1868, and opens with the solitary figure of Ethan Edwards returning to his brother’s homestead three years after the end of the American Civil War. Ethan, wearing a Confederate greatcoat and carrying a sabre, slowly dismounts as he is greeted by his brother’s wife, Martha. Ethan hesitantly holds out his hand to his brother, Aaron, as if unsure whether he will accept it. 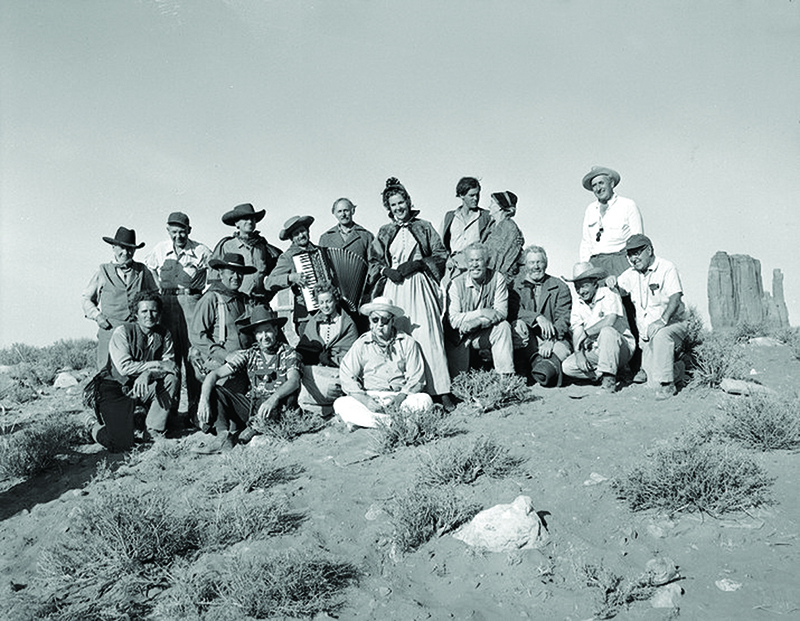 The Searchers cast and crew, including John Wayne and John Ford (front wearing eye patch) on location in Monument Valley

There is a feeling of tension and although never verbalised, it later becomes obvious that Ethan is in love with Martha and she with him. Ethan has an avuncular relationship with the Edwards children, Lucy, Ben and nine-year-old Debbie. But he demonstrates his deep-rooted racism when he snarls at the Edwards’ adopted son Martin (Jeffrey Hunter), who is one-eighth part Cherokee: “A fella could mistake you for a half breed”.

The following morning a local posse of Texas Rangers, led by the Reverend Captain Samuel Johnson Clayton (Ward Bond), arrives at the Edwards homestead to swear in deputies to pursue thieves who have run off a neighbour’s livestock. When Clayton meets Ethan they immediately square off. Clayton then says, “Well, the prodigal brother. Ain’t seen you since the surrender. Come to think of it, I didn’t see you at the surrender”. Ethan replies, “Don’t believe in surrender. Nope, I’ve still got my sabre, Reverend. Didn’t beat into no ploughshare, neither”.

Where Ethan had been for three years following the Confederacy surrender remains a mystery. But he is not just a returning veteran, he is a bitter veteran of the losing side of a war that he has not yet conceded.

For him, his war has not ended. Ethan takes the place of his brother in the posse, stating, “Stay close Aaron, maybe they’re rustlers but maybe they’re Kiowa or Comanche”.

Ethan is right, as while he and Martin are away with the posse, Comanches – under their war chief, Scar (Henry Brandon) – attack the Edwards homestead. They burn it to the ground, kill Aaron and his son Ben, rape and kill Martha, and kidnap Lucy and her young sister Debbie. Ethan vows to find the girls but early in the search he discovers Lucy, violated and slain.

This is undoubtedly John Ford’s most brutal western but the violence he skillfully leaves to the audience’s imagination, as very little of it is depicted onscreen. The rest of the movie details Ethan and Martin’s long five-year search for the surviving daughter, Debbie, amongst the Comanche.

Ethan’s hatred of the Comanche and his consuming sense of revenge for the loss of the woman he loved drives him to the brink of madness, as he and Martin crisscross the territory in their pursuit of Scar. Gradually, Martin realises that Ethan intends to kill, not rescue, Debbie. Ethan believes she is tarnished by blood pollution due to her now being old enough to be some Comanche buck’s squaw. 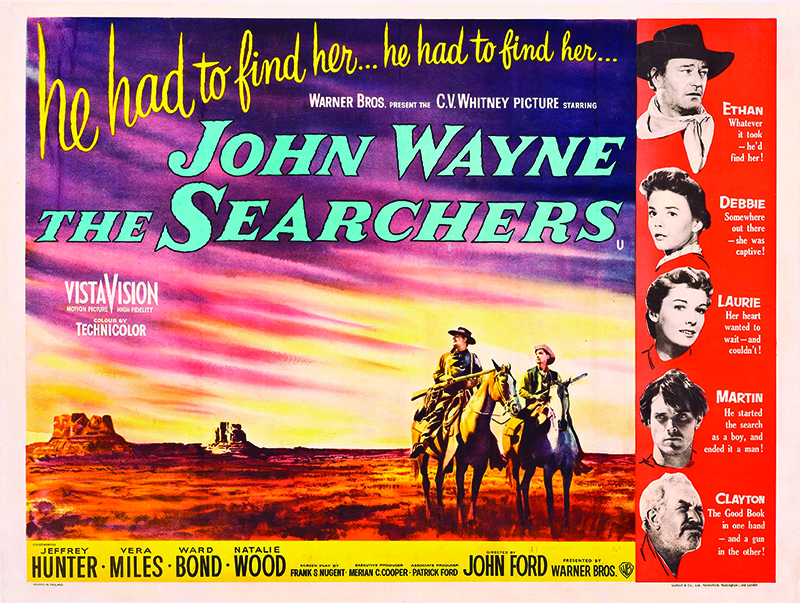 In the 1950s, miscegenation was still illegal in the US and Ethan’s attitude probably resounded with US Caucasian audiences at that time. Ford actually highlights the exact moment Ethan decides he must destroy his niece, in the film’s most disturbing scene.

Two young white female captives have been rescued by the US Army and Martin attempts to question them as to the whereabouts of Debbie. But both are traumatised and incapable of understanding him, seemingly driven mad from being brutalised by the Comanche. Ford concludes the scene with a magnificent close-up of Ethan’s face, graphically clear that he is on the verge of madness caused by his obsessive hatred. He sneers, “They ain’t white – not anymore. They’re Comanch (sic)”.

Ford’s treatment of the racial prejudice of the settlers and the genocide of Native Americans in the film was not only innovative but startling in its harshness.

We learn that Scar’s actions are not motivated by sheer senseless cruelty and brutality, but by a legitimate grievance against the white men who have murdered his two sons. Consequently, Ford delineates Ethan and Scar as not just enemies but also as mirror images of each other.

As the film proceeds to its dramatic conclusion, the audience are left wondering whether Ethan will carry out his threat and kill his niece, or will Martin save her and kill Ethan?

The Searchers is a compelling story full of memorable characters, presented in VistaVision and suffused with Winton C. Hoch’s resplendent Technicolor cinematography – it still looks stunning when viewed today.

Released in May 1956, it easily made its money back at the box office, taking $5.9 million worldwide.

However, despite receiving a number of rave reviews, it failed to get any Academy Award nominations or any other honours.

After being forgotten for two decades, during the 1970s there was a sudden explosion of The Searchers’ influence on leading young American film directors. Steven Spielberg, George Lucas, John Milius, Martin Scorsese and many others began to imitate numerous scenes from Ford’s film in their own productions. Without doubt, The Searchers has influenced more filmmakers than almost any other motion picture, with the possible exception of Citizen Kane.

Finally in 2008, the American Film Institute deservedly named it the greatest American western. Today it is in seventh place on the British Film Institute’s Sight and Soundlist of the 50 greatest films of all time. Both Ford and Wayne would have been justly proud of that. 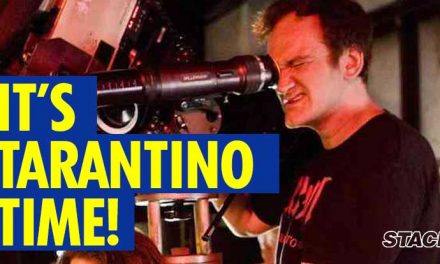 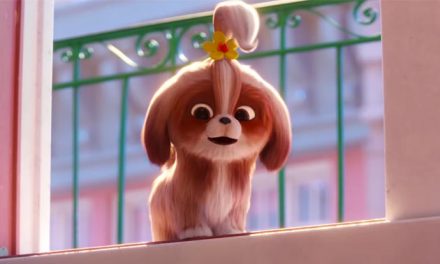 Meet pup star Daisy from The Secret Life of Pets 2 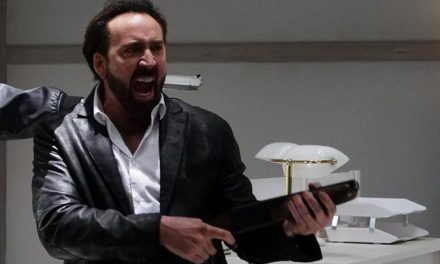 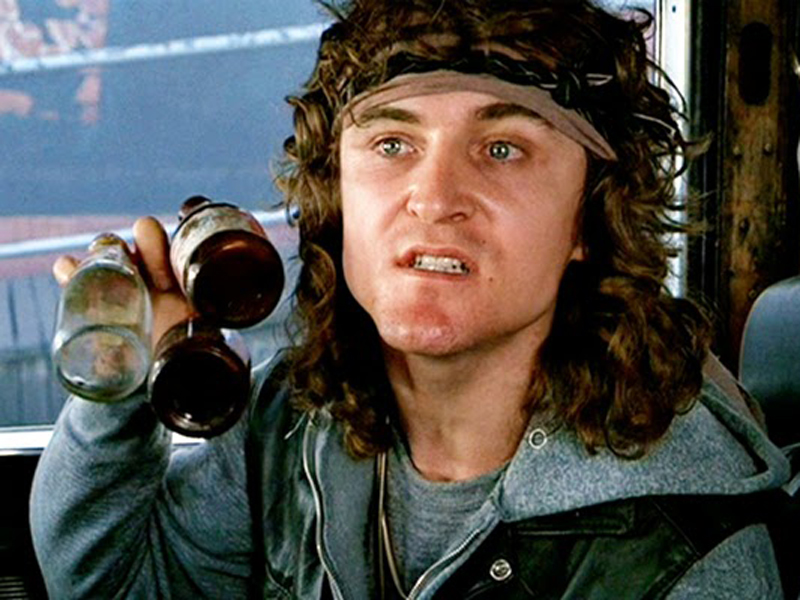 “Warriors, come out to play-eee.”