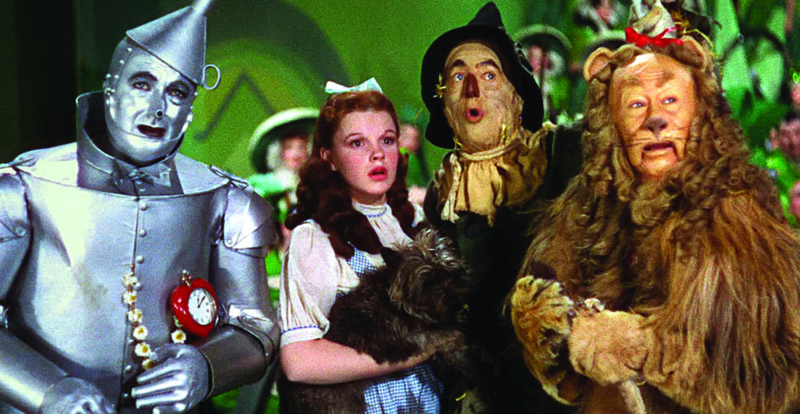 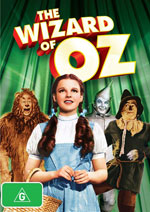 When Ida Koverman, the executive secretary of MGM mogul Louis B. Mayer, heard the 13-year-old Frances Gumm sing at an audition at the Culver City studios, she quickly summoned her boss.

Mayer eventually arrived in time to hear the youngster sing Zing! Went the Strings of My Heart. Mayer showed no emotion but agreed with Koverman that “the kid can sing” and ordered a seven-year contract for her, starting at $100 per week. Although the young Frances had an extraordinarily vibrant singing voice, she was no beauty. Hampered with a plump stubby torso, gaps in her teeth and a stooped posture, she fell well short of MGM’s standards for glamour.

Consequently, MGM didn’t exactly know what to do with her. However, it was the studio’s musical arranger, Roger Edens, who unexpectedly kickstarted the now re-named Judy Garland’s movie career. He had arranged a special lyric of You Made Me Love You into “Dear Mr. Gable” for the 36th birthday party of MGM’s star actor, Clark Gable. Held at the studio’s commissary, Edens got Judy to personally sing the birthday tribute to Gable. Following her impressive performance, Mayer put Judy into Broadway Melody of 1938 (1937), where she would again sing You Made Me Love You, only this time to a photograph of Gable.

With Judy’s star slowly beginning to rise, the powers at MGM set about improving her image. Her teeth were capped, her nose restructured, her thick waist held in by corsets, and her fluctuating weight controlled by Benzedrine pills – a habit that would plague her for the rest of her life. Louis B. Mayer had a brutal philosophy: he hired people he thought were the best, corrected any deficiencies in their appearance, and if they did all right, fine, but if they didn’t, he fired them. How well his young protégé would do, Mayer now left to the response of the moviegoing public.

But Judy Garland was fortunate. Following three more mediocre B-movies, her fifth film for the studio would set her on the road to becoming a legendary Hollywood movie star.

Although fantasy-themed films had never been popular with moviegoers, that all changed in December 1937 when Walt Disney released his full-length cartoon Snow White and the Seven Dwarfs. Due to the avalanche of critical and audience approval Disney’s film received, Mayer was persuaded to purchase the film rights to The Wonderful Wizard of Oz.  Written by author L. Frank Baum in 1900, his fantasy story had become a best-selling children’s book.

Mervyn Leroy was selected by Mayer to produce the film, and swiftly set about casting the production.

The Wizard of Oz has often been described as one of the most perfectly cast films ever made, but almost all of its principal players were second, even third-choices.

Judy Garland was second choice for the role of Dorothy after MGM privately tried to negotiate – but was unable to secure – the services of little Shirley Temple from 20th Century Fox. Song and dance man Buddy Ebsen was cast as the Scarecrow and Ray Bolger as the Tin Woodman. But Bolger argued that his style was better suited to that of a strawman and switched roles with Ebsen. The primary element of Ebsen’s make-up for the man of tin was an aluminium facial dust spray, which when he inhaled it caused him to suffer a severe breathing impairment. He was rushed to hospital and spent two weeks in an iron lung. Leroy was forced to replace him with vaudevillian Jack Haley and used a different make-up to avoid what happened to Ebsen.

The Cowardly Lion character was originally going to be a real lion with vocals supplied off-screen by an actor’s voice. This, however, proved too difficult and Bert Lahr was fitted into a lion’s costume for the role.

The choices for the multi-faceted Wizard role were originally W.C. Fields or Ed Wynn, but both turned down the part. Leroy finally settled for the MGM contract actor Frank Morgan. For the Wicked Witch of the West, Leroy cast Gale Sondergaard – winner of the very first Supporting Actress Oscar. Her character was fashioned as a glamorous, slithery creature – much like the Evil Queen in Snow White. But it was pointed out to Leroy that the thousands of children who were familiar with the book would not accept a glamorous witch. The movie version had to be as she was described in the story – ugly and hateful.

The beautiful Sondergaard had no intention of appearing onscreen as a grotesque looking villainess and flatly refused the role. Margaret Hamilton was the replacement. Billie Burke was selected to play Glinda the Good Witch, as her slightly fey quality played well against the acerbic menace of Margaret Hamilton. To portray the Munchkins, vaudeville impresario Leo Singer arranged to augment his own troupe of miniature performers with one hundred more from all over the US. The final part to be cast was supplied by trainer, Carl Spitz, who brought to the studio a little female Cairn terrier named Terry, who won the part of Dorothy’s dog, Toto.

It was not just the casting of the characters that proved problematic for Leroy, as the film would use up four directors over its production time. Richard Thorpe was first at the helm and was replaced after only two weeks by George Cukor, who in turn only lasted a few days until the chair was given to Victor Fleming. Fleming directed the bulk of the film until he was asked to take over the then floundering Gone with the Wind. King Vidor was brought in to finish the picture and the footage he shot was most of the monochrome Kansas sequences that opened and closed the film. 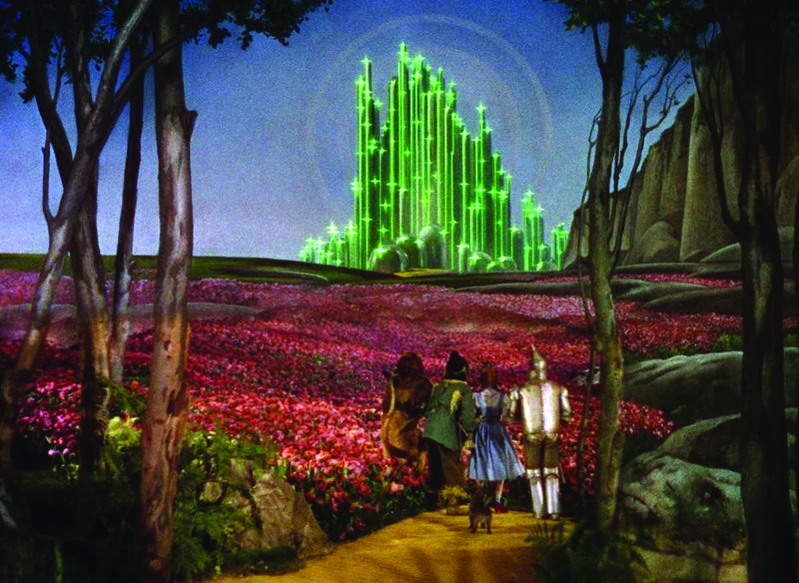 Filmed entirely on MGM’s soundstages, the studio’s creative production personnel were challenged to devise all the necessary Oz magic that was required for the story. This included a Munchkin village, the long extended yellow brick road, a haunted forest, a poppy field and the great Emerald City, as well as Dorothy’s Kansas farmhouse being lifted up and carried away by a tornado; flying monkeys, fighting trees and a melting witch.

Ten new songs were written to augment the film but the most famous of them, Over the Rainbow– which became Judy Garland’s trademark song – was almost ditched from the production because Louis B. Mayer opined that the song slowed the picture down. It was saved and went on to win an Academy Award.

When The Wizard of Oz completed filming, MGM’s investment in the production topped three million dollars, but it fell well short of that investment during its first-run; the lower admission price paid by a younger audience and the elimination of much of the foreign market due to the unfolding war in Europe were cited as the prominent reasons. Ironically it was television – Hollywood’s great nemesis – that finally put the film in the black when it was leased to CBS in 1956. Further network television showcases continued to deliver unprecedented ratings, which over the years would add $20 million to MGM’s coffers. This movie milestone of family entertainment has had an unparalleled career as a television perennial, making it the most widely seen and most beloved motion picture of all time. 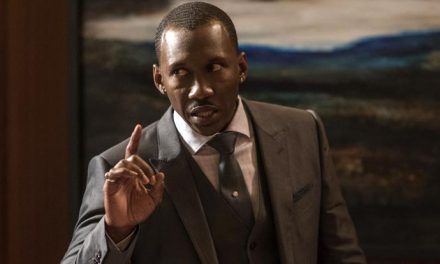 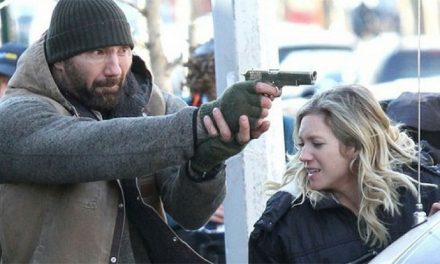 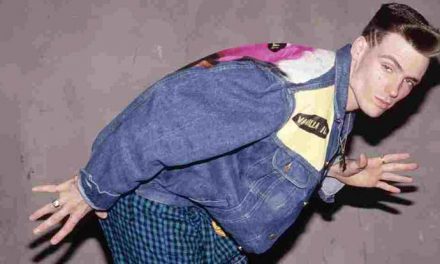 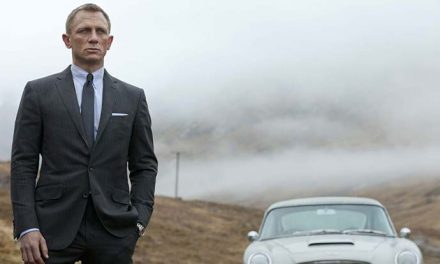