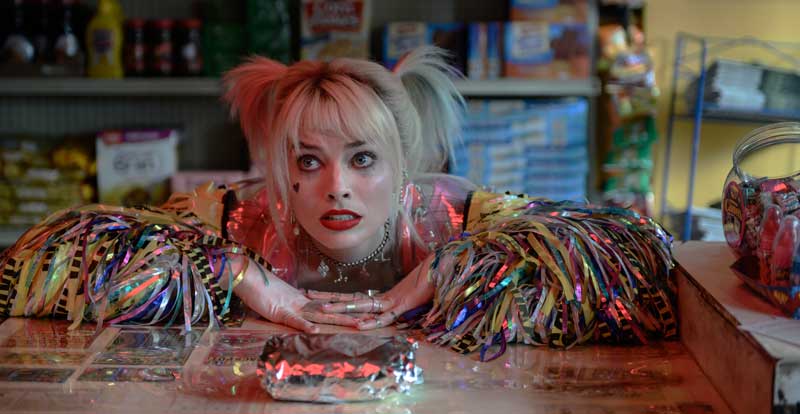 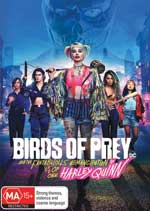 Although winning AACTA awards for her roles in I, Tonya and Bombshell as well as Oscar nods for both films, Harley Quinn remains the role closest to Margot Robbie’s heart. The star and director Cathy Yan talk about Harley’s return – and ‘Fantabulous Emancipation’ – in Birds of Prey.

“She really is very special to me. I feel very protective of her but also very liberated when I play her because, as an actor, your options are endless. With certain characters, they would only react in a certain way, but with Harley, she can do anything because she is a very unpredictable and erratic person,” laughs Margot Robbie when STACK catches up with her.

As the naughtiest girl in the DC Universe, audiences can catch up on Robbie’s second Harley outing with the home entertainment release of Birds of Prey: And the Fantabulous Emancipation of One Harley Quinn, in readiness for her third outing which sees her reunite with the Suicide Squad in James Gunn’s highly anticipated film of the same name (due in 2021).

Taking to Instagram to ask her followers to donate food to the US school system, she can even be seen reading a story to help out all those parents who are sheltering in place with young families.

Filming Birds of Prey post I, Tonya, she was delighted to see all her training on the ice-rink pay off.

“Thank God I, Tonya happened before this because I always wanted the roller-skating element in here just because, in one of the comics, they have this roller derby and it’s just so fun and I was like, ‘Ahh, the image of Harley on roller-skates is just so cool’,” says Robbie, who also serves as a producer on Birds of Prey. 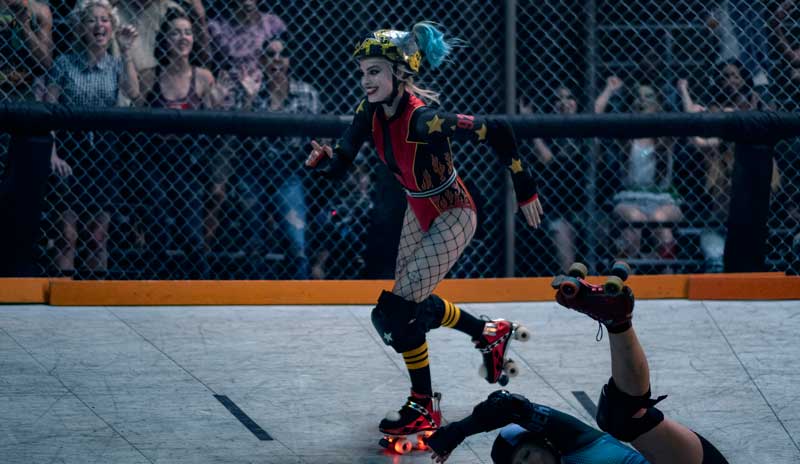 Training on a trampoline between scenes, she says, “We also wanted to incorporate more acrobatics because when she was Harleen Quinzel she was a gymnast as well as being a psychologist among other things. So I really wanted to use a little more of the acrobatic side in her fighting style in this film, so that trampoline stuff, for example, some of the really cool sh–t is not in there at all but the general bouncing around will be – and then the roller-skating I can do…”

In a twisted homage to Girl Power, Harley Quinn – admittedly an unreliable narrator – is our guide through Birds of Prey.

When Gotham’s most nefariously narcissistic villain, Roman Sionis [Ewan McGregor], and his sadistic henchman, Victor Zsasz [Chris Messina], put a target on a young girl named Cass [Ella Jay Basco], the city is turned upside down looking for her. As Harley, Huntress [Mary Elizabeth Winstead], Black Canary [Jurnee Smollett-Bell] and Renee Montoya [Rosie Perez]’s paths collide, this unlikely quartet have no choice but to team up to take down Sionis. 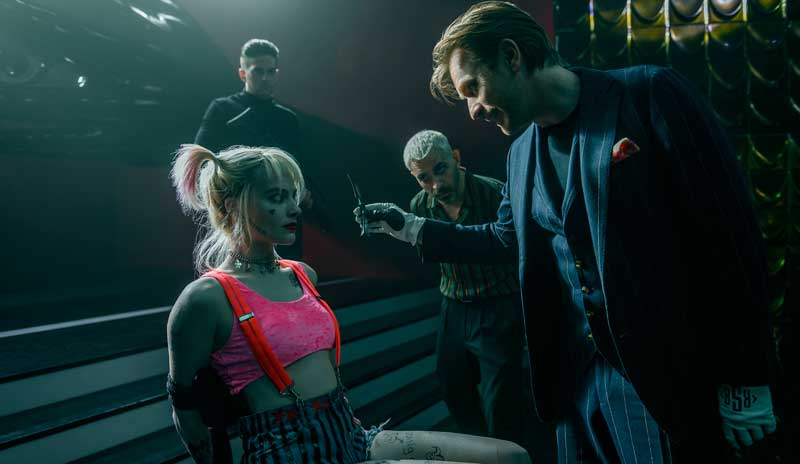 Stepping into the shoes of the dastardly Zsasz is Chris Messina, discovering that it’s not always fun being a blonde when you have to maintain a regular bleaching routine. In awe of McGregor, he says, “I think the audience will be drawn to him as well as being completely frightened by him. He’s done an incredible job.”

It doesn’t hurt that McGregor has some of the best lines, but Messina’s greatest praise is for Robbie.

“You’ve seen her do Harley before but I think she takes Harley to the next level in this movie.

“I’ve worked with some incredibly hard-working actors in the past, but Margot has just floored me. It’s one thing for actors to say that they are producers, but it’s another thing to say that you are a producer and actually do the work.

“So to watch her juggle that very gracefully, and to do it with such kindness is amazing. And then she pops into Harley and is just incredible. There’s nothing that Margot can’t do. She works her ass off and does not take where she has gotten to for a second. Everybody should take a note from her book.” 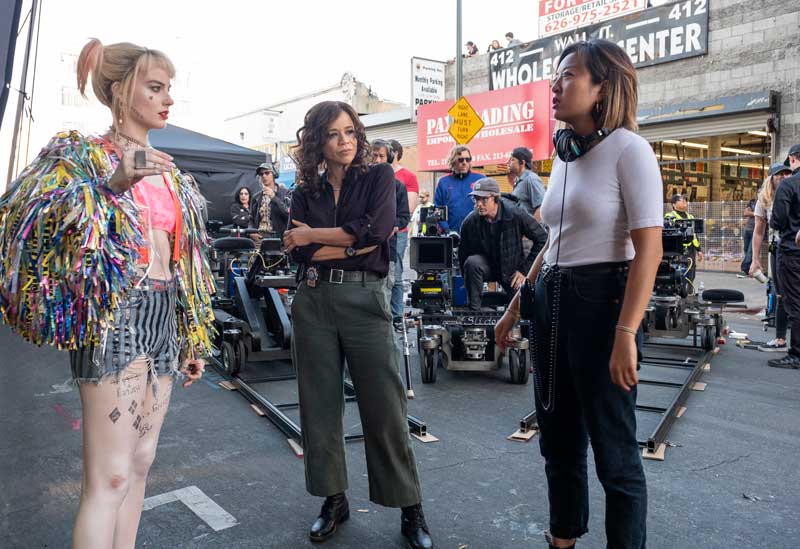 Director Cathy Yan describes Birds of Prey’s ensemble structure as something previously unseen in the superhero genre. “I love ensemble films. And the tone of this is quite different. It’s dark and humorous, sassy and irreverent. I love that tone which is quite similar to my film Dead Pigs (2018), despite how on paper it seems like opposite movies – a small Chinese-language indie to this. “But the way these five different characters come together, and the humour; I don’t think we have ever seen such contemporary and bawdy humour from female superheroes before.”

Yan sees her movie as a big win for feminism. “I think it says a lot. It certainly means that women can work together and I think that unfortunately society has often pinned women against each other and we are programmed to be a little competitive towards one another because there has always only been that one spot.

“Part of this story is that these women are not meant to be together, they are a total motley crew and even visually don’t look like they are a great team. They come from all walks of life, you have a cop and you have Harley Quinn.

“So when they come together, they are very suspicious and there’s conflict and it’s not like they magically get along. But at the same time, they end up working together beautifully, finding strength in numbers. Unfortunately, culturally I think a lot of women can be a little competitive with one another because of the patriarchy.”

Yan certainly hopes for a time when nobody makes a big deal about her being a female director. “I hope that one day we don’t have to talk about my being a woman versus a man. But unfortunately women aren’t given the opportunities that men are and I am an exception to the rule. Hopefully it just becomes our new reality.” 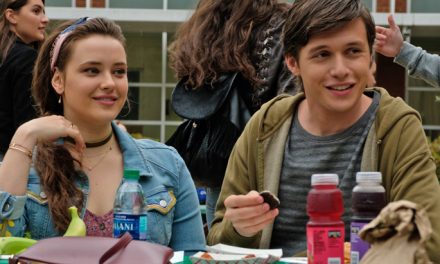 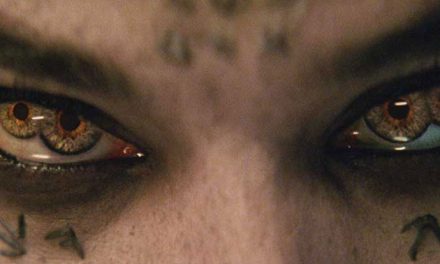