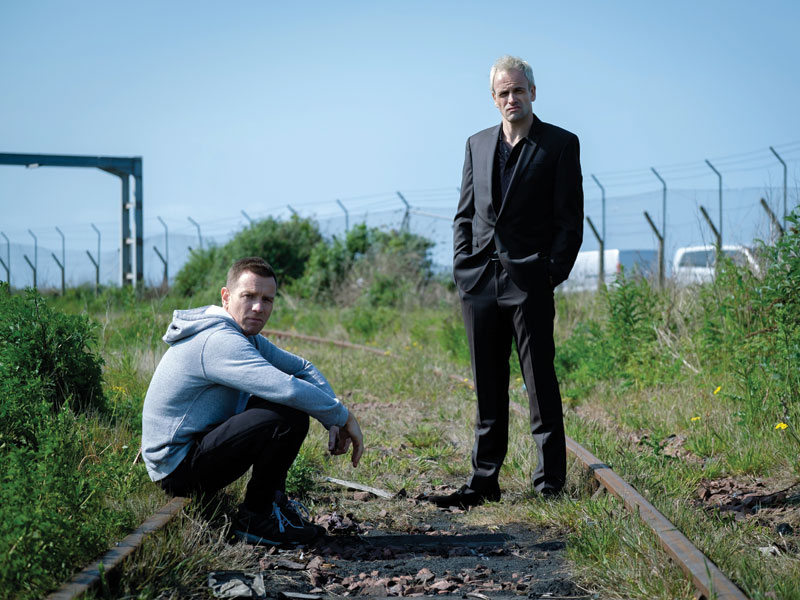 Sick Boy is back, along with a lot of personal issues he hasn’t resolved, in T2 Trainspotting. Jonny Lee Miller tells STACK what to expect from the hotly anticipated sequel to the Brit cult classic.

Twenty years ago, a small Scottish indie movie announced the arrival of four future stars, catapulting Jonny Lee Miller, Ewan McGregor, Kevin McKidd and Robert Carlyle into the spotlight and likewise cementing the career of director Danny Boyle, who would later go on to win an Oscar for Slumdog Millionaire.

Although McGregor had already worked with Boyle two years earlier on Shallow Grave, the buzz didn’t really start until Trainspotting, which spoke to disenfranchised youth as well as rocking the best soundtrack of its day.

“We were all pretty new apart from Robert – that’s why he had the ‘and Robert Carlyle’ credit,” laughs Jonny Lee Miller, 44, when STACK catches up with him in New York, where he films hit TV drama Elementary, having portrayed Sherlock Holmes for five years now.

But Trainspotting was a seminal experience for all its cast, so Miller wasn’t entirely surprised when he received a postcard from Boyle 18 months ago, simply stating: “We’re going to have a go at T2. Will send a script when we have one.”

A few months later the script arrived in the mail. “I thought it was pretty good and I heard the other guys liked it too,” recalls Miller, who just months later found himself reunited with McGregor and Carlyle in Edinburgh, along with original Trainspotting cast members Ewen Bremner, Kelly Macdonald and Shirley Henderson. 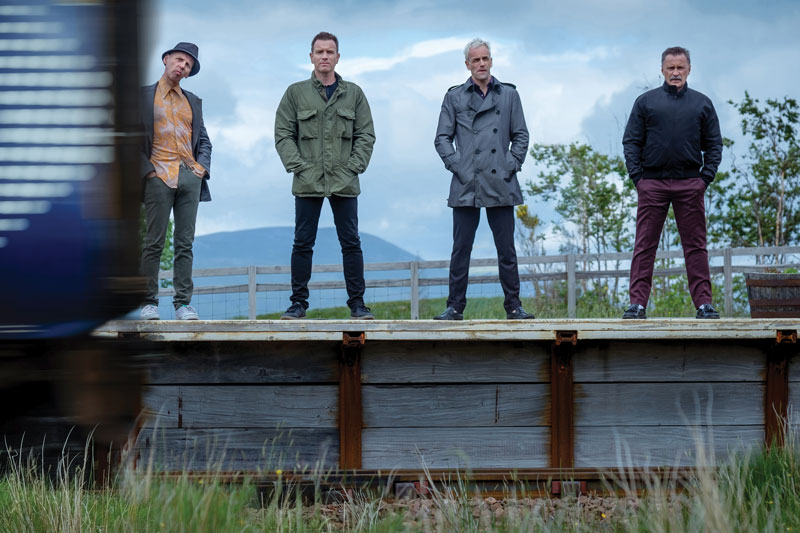 With anticipation riding high for T2: Trainspotting, Miller admits to a certain level of anxiety. “It wasn’t anything that any of us took lightly. We were all quite nervous about it. And none of us had seen each other in ages. Ewan and I used to be very close but I hadn’t seen him in a very long time. Life just took us in different directions. And I was very close with Robert as well but hadn’t seen him in ten years either, so it was amazing to come back together again.

“It’s very surreal, but really wonderful to have that opportunity to do this all over again; to suddenly be able to reconnect as friends and colleagues as well,” adds Miller, whose Sick Boy was the only non-Scot among the main cast.

Sick Boy, he says, has not fared too well in the two decades since we last saw him, having traded heroin for a full-blown coke habit. “I’m not ruling out heroin entirely but Sick Boy is now a bit of a cokehead. He’s still got a lot of personal issues and he really hasn’t moved on in his life. In the first film, they’re a group in the same situation, and here, they are four individuals in very different places.”

If it was a given that Sick Boy was the cool one in the original Trainspotting, Miller isn’t so sure second time around.

“If Sick Boy is cool then the credit has to go to screenwriter John Hodge, and his vision. I just show up and play it. I remember with the first movie, people were like ‘Oh, Sick Boy’s so f–ing cool’. And he was! The hair and everything. Now he ain’t so cool, at all. Because he’s kind of stuck, and it was very interesting to me to show that, like, if you get stuck, and he’s still trying to be that, but it’s not working. The whole film is interesting like that to me, because some of the characters are really stuck in place, and hopefully, I think that’s relatable to people. We’re not trying to recreate the cool vibe of Trainspotting, because what’s the point in doing that?” 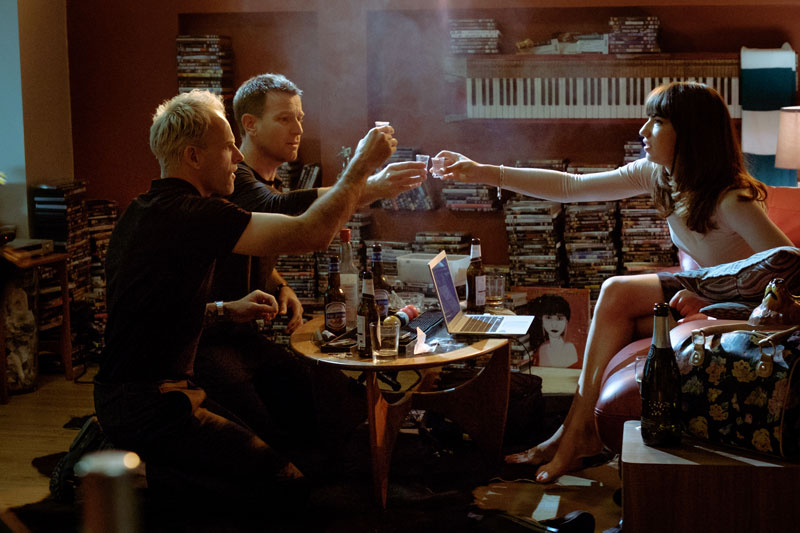 “I think that’s what people really identify with, and what was refreshing about the first movie is that the hero does that to his friends at the end – and he’s still sort of remembered as the hero of the movie,” he offers.

“People let each other down all the time and they do selfish things, for whatever reason, and things aren’t always black and white, and there’s not always right and wrong, and that happens in groups of people, and I think that was really relatable, so T2 looks at that,“ adds Miller, although his lips are firmly sealed regarding T2’s plot.

“The first film didn’t have a plot,” he argues. “It’s just a group of friends interacting, and then at the end, they get some drugs, and go down and do a drug deal. That’s really the plot! That’s it! There’s no plot! And it’s kind of the same model for the second movie. It’s a group of people interacting, and how their actions have affected one another.” 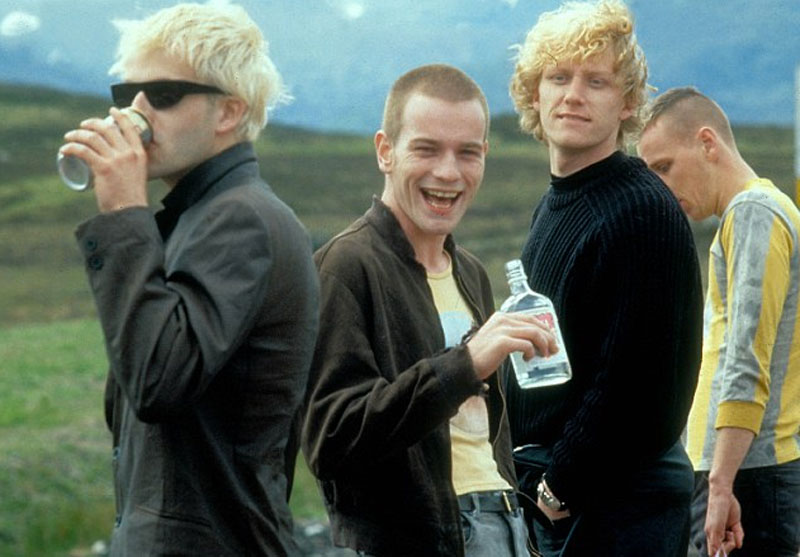 Returning to Edinburgh to shoot T2 was also surreal, he says. “First time round, we could run around doing whatever we wanted, and no one cared or bothered. But this time, people were freaking out and we were getting followed by paparazzi, and they’re trying to shelter our costumes and saying ‘Put your hood on when you get your hair dyed,’ and I was like ‘What’s the f–ing point?’ And it was Danny who said, ‘It’s like they’re f–ing Star Wars up there!’ But it’s true. It brings a lot of people, and a level of excitement which is quite alarming.”

Wed four years to Angelina Jolie after they met on his first film, Hackers, Miller has had enough excitement to last a lifetime, today married to actress Michele Hicks with whom he has an eight-year-old son, Buster.

“People liked to imagine I was like Sick Boy but I’ve never been that guy. In my spare time I like to run marathons,” he reveals.

“I’m happy living in New York and I just wanted to continue doing Elementary for as long as they let us. Ride that one out and see what happens next. I’m a parent, so I’m just looking to raise my kid well.”

T2 Trainspotting is in cinemas February 23. Check out our review. 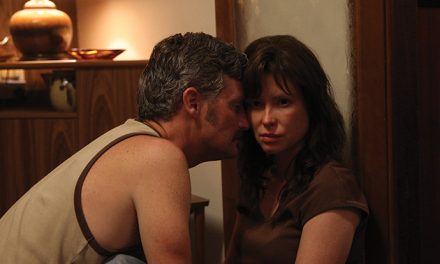 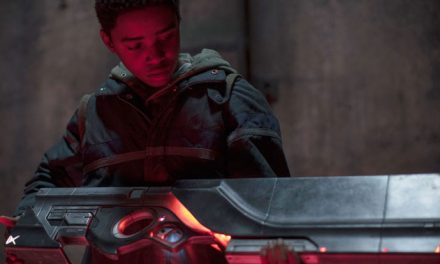