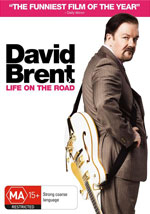 Paul Jones spoke with Ricky Gervais about the return of his iconic comedy creation in David Brent: Life on the Road.

Donald Trump has literally just been announced as president-elect. Could there have been a better – or worse – time to talk to Ricky Gervais? “Mad, innit!” he says, before launching into a humorous analysis of the people that voted for Trump, the shock result, and what it means for the world. Yet, before I have to intervene and steer the conversation away from American politics, Gervais himself is done with the subject: “Anyway, enough of that.”

Tonight we’re talking David Brent: Life on the Road, Gervais’s full-length film that resurrects the eponymous character he co-created with Stephen Merchant for the BBC mockumentary series The Office. 15 years on, Brent is now a sales rep for Lavichem, a company that specialises in sanitary products. In 2016, Brent is a disconsolate character, immersed in a mid-life crisis and clutching at the futile dream of taking his band, Foregone Conclusion, out on a self-funded tour. 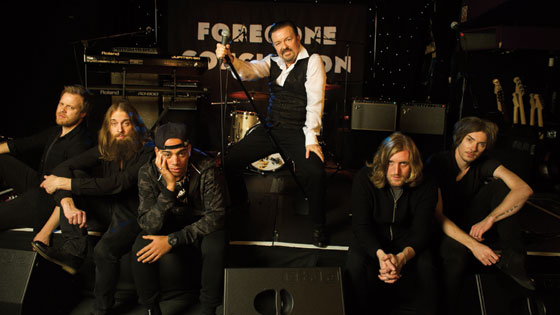 “I think people are going to be surprised how they sympathise with David Brent this time around, and how much pathos there is in a middle-aged man who’s got one last shot at fame,” says Gervais, who speaks as if he’s sporting a perpetual smile. “And by fame, he’s really going for happiness. He just thinks fame will sort it out for him, and of course it won’t. It was nice to put that together in a movie as opposed to just a TV special.”

That was a question I’d wanted to ask Gervais when I finished watching the film. Given the subject matter, did he not consider an extended TV or Christmas special? Why did he opt to bring Brent to the big screen?

“Ambition, I think more than anything else. I wanted to make a sort of classic British movie and it not be just another episode of The Office. And that’s why it had to be 15 years later, so enough had happened for it to be a movie.”

The final episode of The Office, the show that introduced Gervais and his brand of cringe-inducing humour to a global audience, aired in 2003. Since then he has written and starred in several other television series, directed films, performed stand-up comedy, authored a series of children’s books, and even voiced a video game character. While he returned briefly to the role in 2013 for a Comic Relief special, it has been a long time since Gervais has played David Brent. 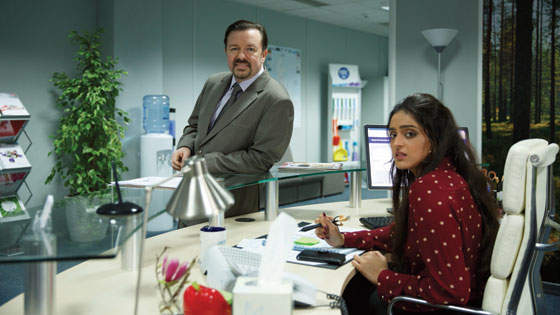 “I can play him in my sleep but I had to change him a little bit as well because I had to acknowledge that a man would’ve changed in 15 years,” he explains. “What I decided to do was make him just a little bit more broken. I wanted fame to have broken him a little bit over the 15 years, and I gave him a nervous laugh.

“So although he’s the same guy, I made him slightly more honest because that reflects how documentaries change as well. A documentary is much more intrusive these days. 15 years ago, you wouldn’t have talked about a man’s breakdown on one, but now documentaries start with it. Things on TV like Big Brother, for example, tend to start with people at their lowest ebb.”

He pauses momentarily: “People live their lives like an opened wound to be famous these days. What’s nice about Brent is we realise he was never that sort of person. He’s not the modern person who would do anything to be famous. He wants to do something to be famous; he wants to be a rockstar, bless him.” 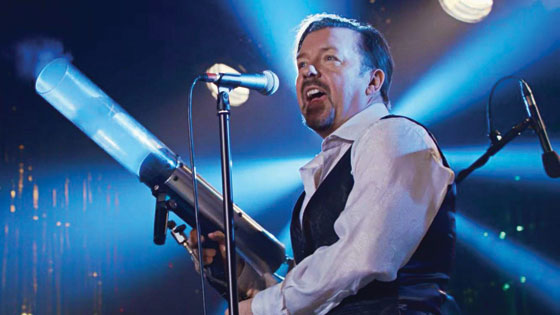 Gervais also wrote 15 songs for an accompanying album. Aside from the hilarious (and politically incorrect) lyrics, the structure of the tracks is very good. These are melodies you’ll be humming for hours after you’ve listened to them. However, Gervais emits his trademark chuckle when I ask whether he’s a prolific songwriter.

“I don’t sit at home with a guitar on my lap all day twiddling – I have the odd idea. These songs were written over a few years. I wrote a couple for The Office… I wrote Equality Street for a Comic Relief sketch on the ten year anniversary, and then I did a couple of gigs and wrote a few more. Finally, I wrote some more specifically for the film. So it was quite gradual and organic.

“I suppose I’ve written 15 songs over 15 years, so I certainly wouldn’t say I’m prolific, but it’s great fun doing them and it had to be real,” he continues. “The joke isn’t that they are terrible songs or comedy songs or badly performed, the joke is that it’s a middle-aged tampon rep singing songs that he knows nothing about. He believes in them, and that’s what’s funny. He believes he’s helping the Native Americans; he believes he’s sorting out the prejudice to the disabled.”

Watching Brent remains an uncomfortable, even excruciating, experience that still leaves you shifting awkwardly in your seat. It’s like the unexplainable calm that preludes a traffic accident; the inability to reach out and prevent what is about to happen. Of course, this visual discomfort is accentuated with the realisation that there’s a little bit of David Brent in us all.

“The first time you watch David Brent, you go, ‘Oh my god, what a prat! Thank god I’m not like that,’” laughs Gervais. “Then you realise, actually I’ve done that. We’re all a bit like Brent because what I put into him are the things that we all care about. We all want to be loved; we all want to be popular; we all want to think we’re making a bit of a difference every day. I just magnified that and made him desperate for all those things. And that’s what we see in him. We see all those things that we care about.”

As well as his amiability, Gervais is an intelligent and engaging man to interview, and it’s obvious during our conversation that he thoroughly enjoyed returning to the role. Whether it’s delivering acerbic asides as host of the Golden Globes, or his active and erudite presence on social media, his fast wit is an indelible talent. Stand-up is his next focus and something he’s hopeful he’ll bring Down Under – a location he’s yet to visit.

“I think stand-up is me at my most honest, which is what you should do,” says Gervais. “You should always be trying to tell the whole truth more and more. The older I get I think the truth is everything. You know what, don’t give a f-ck what people think about it, or whether they like the truth, you’ve just got to f–ing say it.” 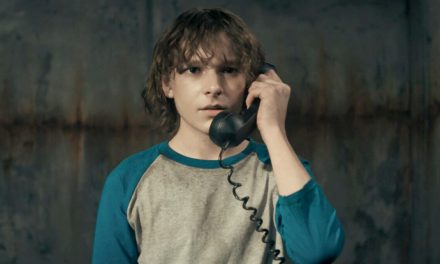 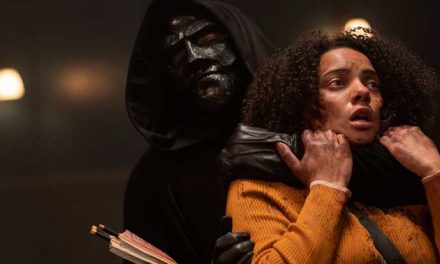 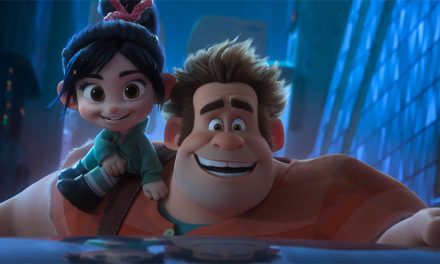