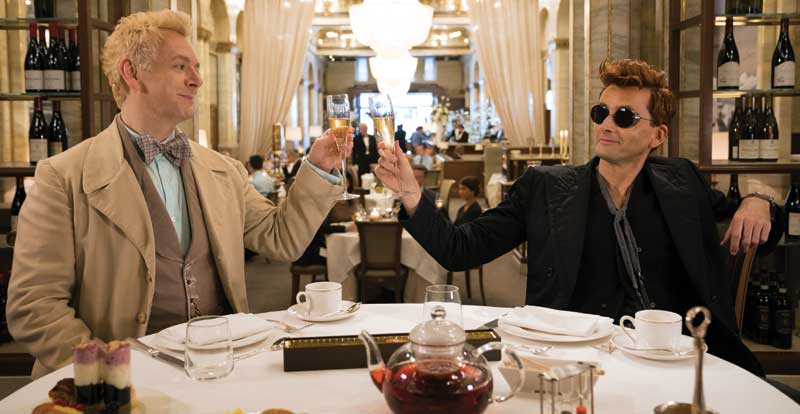 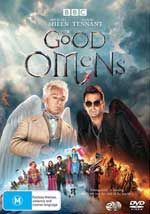 Neil Gaiman’s best-selling novels Stardust and Coraline have been adapted as successful feature films and, more recently, American Gods was brought to life as a television series. But when it came to mounting a TV adaptation of Good Omens, which he co-wrote with author Terry Pratchett (Discworld), Gaiman made it his personal mission to deliver something his late friend and collaborator would be proud of.

First published in 1990, Good Omens is a satirical take on the biblical Armageddon, which a demon named Crowley and his angel pal Aziraphale are attempting to sabotage in order to maintain their cozy lifestyle in England. Featuring chattering satanic nuns, a displaced child Antichrist and the spookily accurate prophecies of a witch named Agnes Nutter, this whimsical comic fantasy was nominated for the World Fantasy Award and has gained an enormous cult following over the decades.

Now the novel has been adapted as a six-episode BBC mini-series, written by Gaiman and showcasing a wonderful double act by Michael Sheen and David Tennant (as angel and demon, respectively) alongside an all-star cast that includes Jon Hamm, Michael McKean, Miranda Richardson, and Frances McDormand as the voice of God. 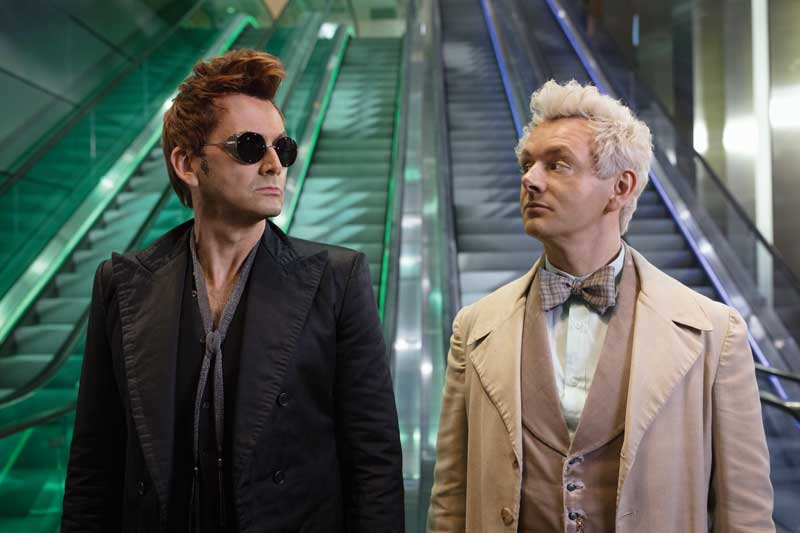 When STACK speaks with Gaiman, one of the first things we ask is why a screen adaptation of Good Omens took so long to materialise.

“I think it was the technical challenges,” he muses. “The technology wasn’t there. There’s an incredible amount of CGI used in lots of different ways [in the series]. There’s the big, obvious CGI and then there’s the sort where people will say, ‘Where in Soho were you filming?’ And I will have to say, ‘That was a car park on a disused airfield and we went in and digitally made it Soho.”

That’s not to say attempts weren’t made over the decades. “Terry Gilliam spent years trying to get it made and was never able to get it off the ground, despite having a fantastic script,” says Gaiman. “And at one point Terry actually had Johnny Depp and Robin Williams as Crowley and Aziraphale. He expected people to make it but the timing was wrong. He went to Hollywood to pitch it just after 9/11, and nobody was interested in an end of the world comedy at that point.”

Fast forward to 2019, and a story concerning a world spiralling towards Armageddon suddenly becomes scarily topical. 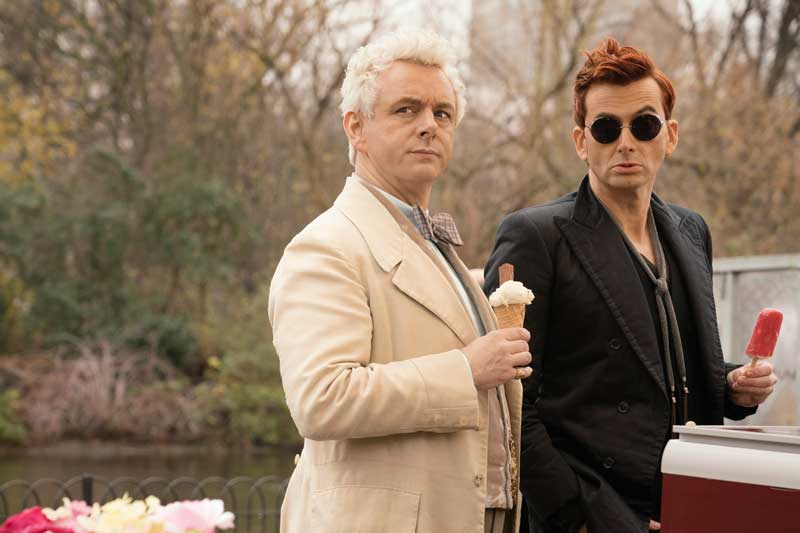 “I think we were really lucky in that [the series] got made at the perfect time for it to get made,” he says. “People have asked me, ‘How come it’s so timely considering it’s based on a book written 30 years ago?’ And I have to tell them that I kind of wish sometimes that it was less timely, because it is Armageddon fiction.”

Gaiman promises a very faithful adaptation of the novel albeit with a few tweaks, such as updating the story to reflect today’s technology (Crowley invents the selfie!).

“If you love the book, you’ll love the TV show. There aren’t huge changes for the sake of changing things. On the other hand there’s definitely some new stuff. There are lots of people and things that Terry and I talked about for a sequel. And never having made the sequel, I was happy to put them in.”

Good Omens is distinctly the voices of Gaiman and Pratchett, but at the same time possesses an unmistakable Monty Python and Douglas Adams flavour. Gaiman confirms that both were indeed an influence when writing the book.

“I think that Python was a huge influence on me, and on Terry. The morality of Life of Brian – the moral point of view and the outrage is something that creeps into Good Omens as well.

“As a young journalist I had interviewed Douglas many times and I was fortunate enough to have been hired to do The Hitchhiker’s Guide to the Galaxy Companion, which I wrote in 1987. And having written that, I went, ‘You know what? I really love this style – it’s a really nice style to write in.’ And that was the point where I wrote the first five thousand words of the thing that would become Good Omens. So yes, I think Douglas was definitely a huge influence.” 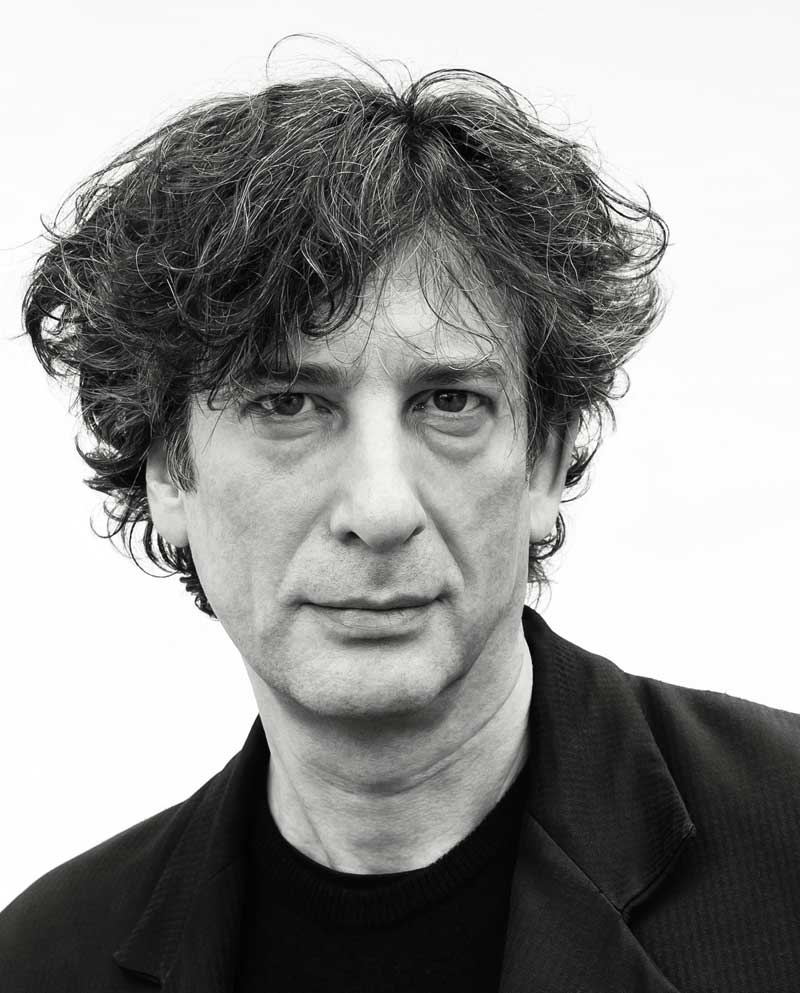 Gaiman is melancholic when he recalls the circumstances that led to his writing the mini-series adaptation, following Pratchett’s death in March 2016.

“Terry and I had been looking for a writer for a long time. The BBC had made it very clear that they wanted to make it. We’d spoken to Terry Jones of Monty Python but we didn’t know at the time he was going through his own issues. His pitch was kind of useful in some ways because we looked at it and thought, ‘This doesn’t feel like Good Omens.’ That was actually a good thing to feel; it helped bring into focus what Good Omens was.

“After Terry Jones, we asked a lot of writers – fancy, important and famous writers – and they all said no. We didn’t really have an alternative, at which point I got a letter from Terry saying, ‘You have to do this because you’re the only person out there who has the same understanding and love for the old girl as I do. You have to make this.’

“And then Terry died, which turned it into a last request. And now that I was dealing with a last request, I honestly would have much rather not made it. But I felt like I owed this one to Terry. As a result of which, while making it, I was a much grumpier and more driven and dedicated showrunner than I would have been if it had been something by me, because I knew that I was making it for Terry. I knew it didn’t just have to satisfy me; it had to satisfy the Terry Pratchett looking over my shoulder.

“It was a lot of work, but I felt like we got there in the end.”

When asked what he thinks Pratchett’s opinion of the show might have been, Gaiman pauses. “If by some beautiful, wonderful miracle Terry could be put back here on Earth, I think he would watch the whole six episodes and then come over to me and say, ‘Listen, you know that bit in episode two, if you just do this, this and this, you’d have made it 17 per cent funnier.’ I think that’s what we probably would have got. 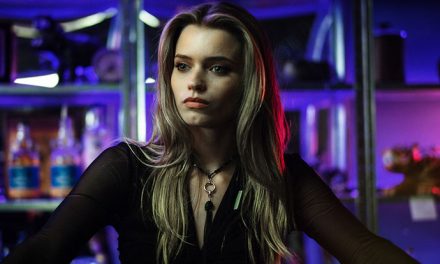 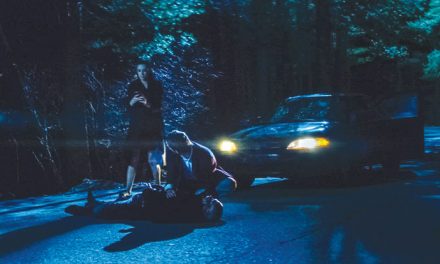