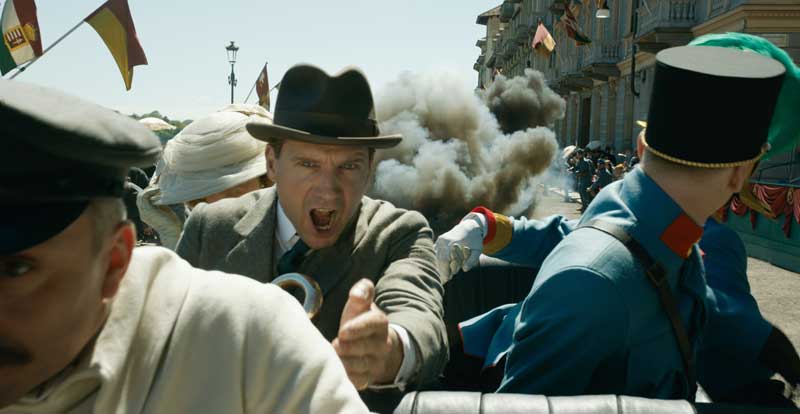 Interview with the director and cast of The King’s Man 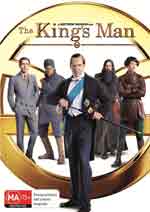 If Matthew Vaughn’s 2014 spy action-comedy Kingsman: The Secret Service introduced the world to a young Taron Egerton, then the writer-director hopes to recreate magic with its prequel, The King’s Man, starring British actor Harris Dickinson.

“The way I cast is purely about what I see, and Harris blew me away within ten minutes,” Vaughn tells STACK when we chat over Zoom.

Not that Dickinson, 24, is entirely a newbie, having already made quite an impression in Maleficent: Mistress of Evil and dystopian teen drama The Darkest Minds.

“The way I cast, I am very instinctive, and when an actor walks through the door, it’s the same experience an audience has watching the screen with somebody entering a scene. And then they open their mouth and you either think, ‘F–ing hell, they are good or they are terrible,’” says Vaughn.

“So when someone comes in and they look right and then they deliver the lines perfectly, that doesn’t happen often,” he says, comparing Dickinson with Aaron Taylor Johnson whom he cast within two minutes for Kick-Ass after previously auditioning hundreds of other actors.

“And it was the same with Taron. I’d virtually given up on finding anyone in both those scenarios. And weirdly, Harris was the second person I saw for the role.  But then he got it and that was it. If they are right, they are right and, unless I am 100 per cent sure they are right for the role, I don’t give it to them. You either believe it or you don’t, and I believed in Harris immediately.”

Chatting with Dickinson about his initial audition, he says, “I think Matthew had watched some of my work and we met and he told me a little bit about the film because I hadn’t been sent anything. It was kind of unorthodox, Matthew is very laid back and doesn’t pretend to be anything he is not, he just says it like it is, which is what I love about him. So it was pretty chill, although I was definitely nervous.”

Prior to his audition, Dickinson didn’t necessarily have any fight skills and was worried he might not be up to the job. “Matthew gave me a challenge and was like, ‘Oh you know there’s going to be a lot of physical stuff,’ and I was like ‘Yeah, no problem, I can do that man, no worries’. And then like fast forward six months down the line and I am dragging myself through the sh–t. But it was good,” he laughs.

Describing his character, he says, “Conrad is a 17-year-old, he’s the Marquis of Woodstock, he’s young, brave and aristocratic. His father is the Duke of Oxford, so he’s been living with him in this very grandiose, strict, upper-class lifestyle. He’s naive to the real world when we first meet him.” 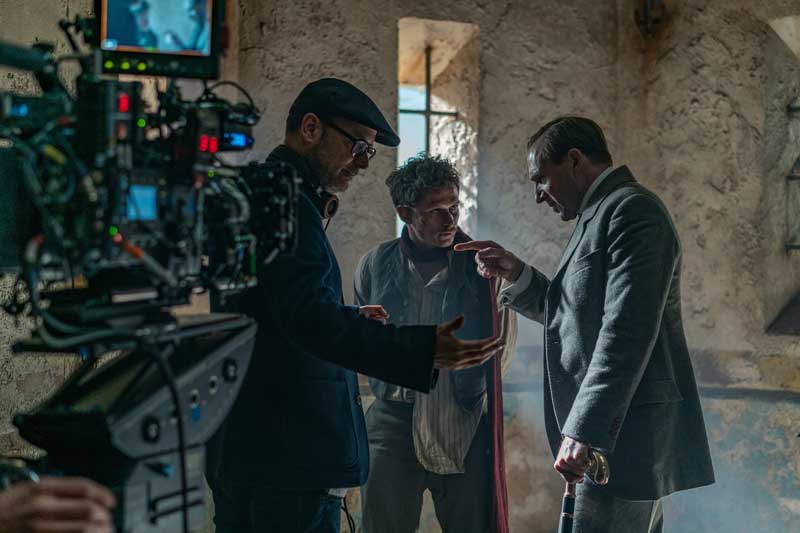 While Kingsman: The Secret Service and its sequel, Kingsman: The Golden Circle (2017), were both big box office hits, Vaughn wasn’t ready for a third film, instead looking to do something different with this new iteration, kicking off The King’s Man story more than a century earlier, playing out in the shadow of WWI.

“I wanted to do a huge, epic adventure. When I was a kid, films like Lawrence of Arabia filled the screen and were epic but never boring, so I was thinking, ‘I want to bring back that genre.’ It was an itch I wanted to scratch.

“Balance is the key to everything and this is a different film. It’s the origin story, and the destination can’t be the same place as where you embark from – you have got to have a journey, so this embarks from a very different place to the other Kingsman movies.

“And the journey starts with elements of what we know some of the Kingsman for, but this is a companion piece and a different film. It’s connected through the tailor shop and through the history and values but it’s different, otherwise there’s no point. I didn’t just want to do just another Kingsman movie and put them in period suits and go ‘Hey, now let’s go have a fight in a church’.” 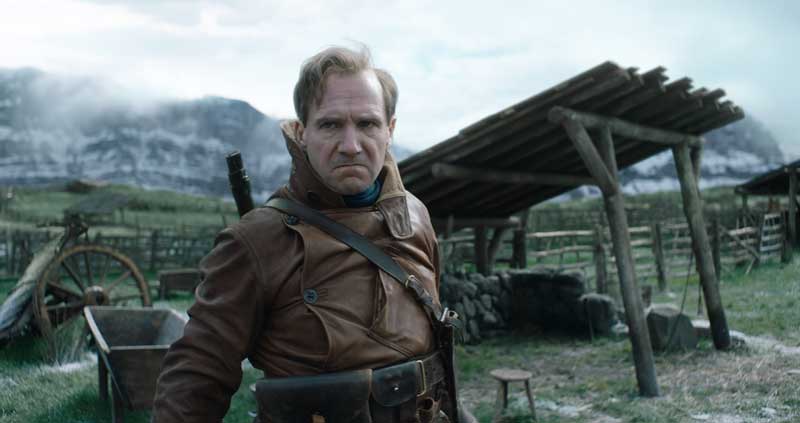 Ralph Fiennes as the Duke of Oxford

Somewhat hilariously, Tom Hollander plays three roles – King George, the Tsar of Russia and the Kaiser of Germany – in a cheeky nod to the inbred nature of European royal families.

Fortunately, Hollander immediately saw the funny side of Vaughn’s approach. “It’s a clever idea of Matthew’s because all the royal families were related, as we all know, and that’s why they fell into war, because of their alliances and rivalries. And the three of them were cousins, so it’s a good joke to have them played by the same person.”

However, the spectre of WWI hanging over this prequel gave Fiennes some initial concern in signing on. “The element of WWI definitely gives some of the movie a more weighty and serious tone,” he says. “I was quite candid with Matthew at the beginning and said, ‘Well I like what this could be but aren’t you giving yourself quite a challenge because you’ve got this very serious dramatic possibly tragic element, but it’s got to sit alongside this humour and action sequences with a mischief, fun, possibly slightly campy… so how are you going to bring it together?’”

But Fiennes believes Vaughn has managed to deliver the impossible. “I  actually believe he has and I think, in its last 45 minutes, The King’s Man delivers everything a Kingsman fan would want. Matthew has fun with the history, not with WWI, but with the figures of Rasputin or the Czar of Russia, he is quite mischievous with it. And the fictional characters, like myself, are involved with some of these characters. So it’s unusual, it’s not like any other Kingsman.”

Arterton gives a wink to Mary Poppins in her role as nanny Poppy. “I guess there is a little bit of a nod to her, her preciseness and can-do and getting things done, and just how Polly is very to the point and can put you in your place in a few words, just like Mary Poppins. But, unlike Mary Poppins, I think Polly is sort of the rock and roll version in that she’s quite daring. When Matthew and I were talking about Polly, we agreed she is the badass version of Mary Poppins,” she laughs.

Ifans says he was delighted to be asked to play the villain of the piece, Rasputin. “I was very flattered Matthew thought of me for this. I think generally when you play a historical figure, you have to play them with a modicum of reverence, but you have to have fun with it and take what is fact and use what is useful and discard what isn’t.

“In terms of Rasputin, if we don’t know his story, I think most people have an image of him, so the amazing makeup and costume departments did most of that work for me. Rasputin was a mysterious figure who had a hold on the Czar and his family and on Russia itself, so I wanted to crank up the kind of mystical hypnotic sexual elements of Rasputin.

“The most work I did with him was of course physically, getting fit and able to participate in the fights and the stunts. The only other thing I really did was work on a Russian accent. But more than that, I wanted to lower my voice into a deep, mantric kind of hypnotic voice.”

Ask Ifans how he achieved that, and he can’t help but laugh. “I didn’t do it with any kind of professionalism I’m afraid – all it meant really was going back to my flat each night and screaming into a pillow for 40 minutes at a time. It must have sounded to my neighbours that Rasputin was actually doing something awful to me in the flat. And so I would scream into a pillow and then I would wake up with a voice that was several octaves lower than my own.”

Having enjoyed his action-adventure trip into the past, don’t imagine that Vaughn has given up on the original Kingsman franchise – a third film of the original franchise already in the works.

“We were meant to be prepping in November [2020] for Kingsman 3,” he reveals. “But COVID decided to f–k that up for everyone at the moment, so we are waiting to see what happens. And I am hoping that people like this version because I would love to go through the decades, because Kingsman is about history, espionage and fashion. It’s fun to explore.

“So, touch wood, people go watch it and like it and yeah, there will be more. The audience is the boss, not me.” 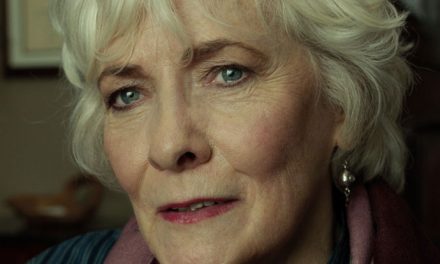 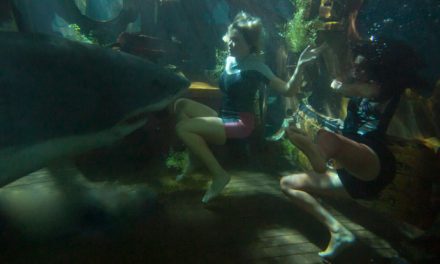 Get ready for more shark tales in The Reef: Stalked