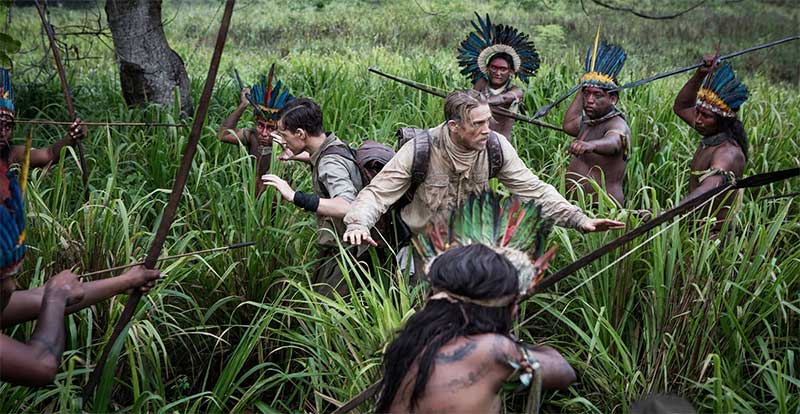 Charlie Hunnam talks about his most challenging role to date, as British explorer Percy Fawcett in The Lost City of Z.

It’s been a long time coming, but Charlie Hunnam today finally basks in the warm glow of box-office stardom following a 20-year career which really only gained momentum after he was cast in TV’s Sons of Anarchy.

If many actors are content with careers as character actors working in ensembles – very few are anointed with the weight of shouldering a film all the way to the box office.

“I lost almost 40 pounds for that film, shedding 15 pounds in the final eight days of shooting before I got down to 145 pounds”

But Hunnam, 37, has done that not once but twice this year, firstly in Guy Ritchie’s King Arthur and now with James Gray’s The Lost City of Z, co-produced by Brad Pitt’s Plan B.

Filmed on locations around Northern Ireland and Colombia, The Lost City of Z was, by far, the more difficult role, shedding 40lbs to play starving British explorer Percy Fawcett, a man in search of an unknown civilization who vanished in the Amazon jungle in 1925.

“I lost almost 40 pounds for that film, shedding 15 pounds in the final eight days of shooting before I got down to 145 pounds,” recalls the actor who, on his better days, is famed for his awesome abs and rock-hard torso.

“Obviously that’s a big physical challenge but it’s something that also has an emotional and a psychological effect so it’s not for nothing. If it was just the physical challenge, it may have been boring but I got into a really deep, clear zone starving myself so it was really something for me,” says the actor who actually took over the role from Benedict Cumberbatch who, in turn, had inherited it from Brad Pitt after he aged out of the character.

“Losing all the weight was almost like an injury. I don’t know if you have ever had this experience where you’ve been injured and you have to crack on and get on with your life and it sort of focuses you in a way where you have to be very mindful about the day, how you are going to get to the office and how you are going to leave yourself enough time while you’re nursing this thing. That is sort of like being hungry all the time. It has this focusing and also a spiritual and emotional component that was actually very, very positive for me,” says Hunnam who co-stars with fellow Brits Robert Pattinson, Sienna Miller and Tom Holland.

During the early 1900s, the real-life Colonel Fawcett had made several expeditions to the Amazon – determined he could find the lost civilization – before he mysteriously vanished.

“The real tragedy is that he was right – he just hadn’t anticipated how quickly the jungle would reclaim its territory. But he was literally walking around on top of the foot print of the city,” says the actor who infamously turned down the role of Christian Grey in Fifty Shades of Grey.

“This role took on an enormous amount of importance to me in terms of proving my own capabilities to myself. It was an opportunity to go as deeply into the work as I’ve always craved.”