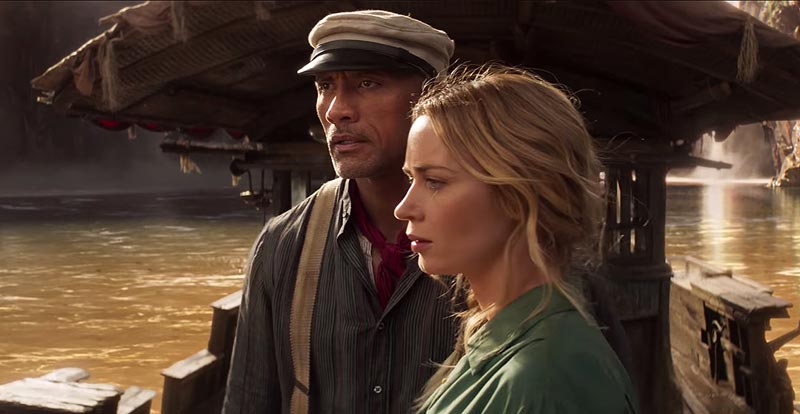 Spend even a few moments with Dwayne Johnson and Emily Blunt and their crackling chemistry is undeniable. Blunt teases him mercilessly, while Johnson gives it right back.

We are in Hepburn and Tracy territory here, or Michael Douglas and Kathleen Turner in Romancing the Stone, which Blunt cites as one of her all-time favourite movies, claiming to have watched it 45 times.

She further taunts Johnson by revealing how the mighty tough guy that is The Rock is terrified of the jungle, pretending to forget his name and referring to him as “Dave.”

Ask if there’s any romance between this adorable screen duo, she cracks, “Hey listen… You never know, right? I mean he wishes…” 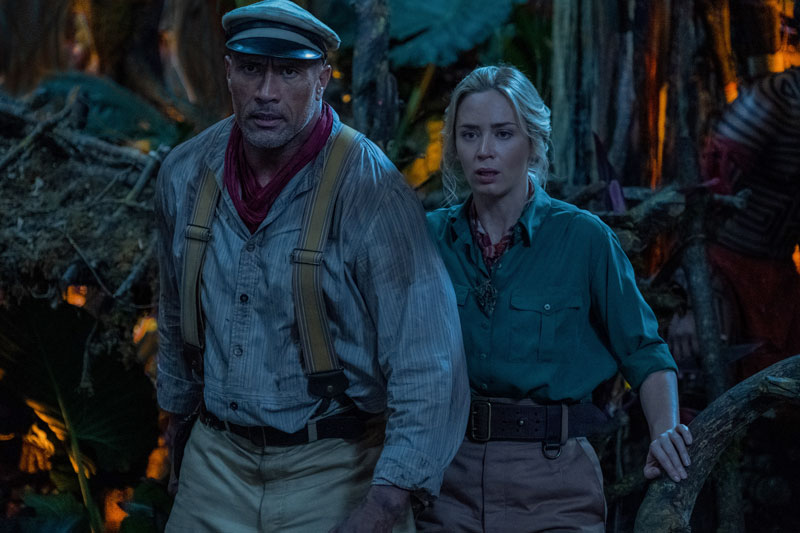 Blunt giggles as she describes Johnson as being the fourth choice for the role, writing begging letters to Disney, while in reality, Johnson was onboard from the very beginning, advocating for Blunt to be his leading lady.

It’s surely the kind of chemistry that predicts smooth sailing at the box office for Jungle Cruise, the action-adventure film based on Disney’s oldest and most iconic ride – designed by Walt Disney himself!

Set in the early 1990s in the Amazon jungle, Frank and Lily are as much opposites as the well-bred British Mary Poppins star and the former WWF wrestler and action star are in real life. And of course we all know how opposites attract. 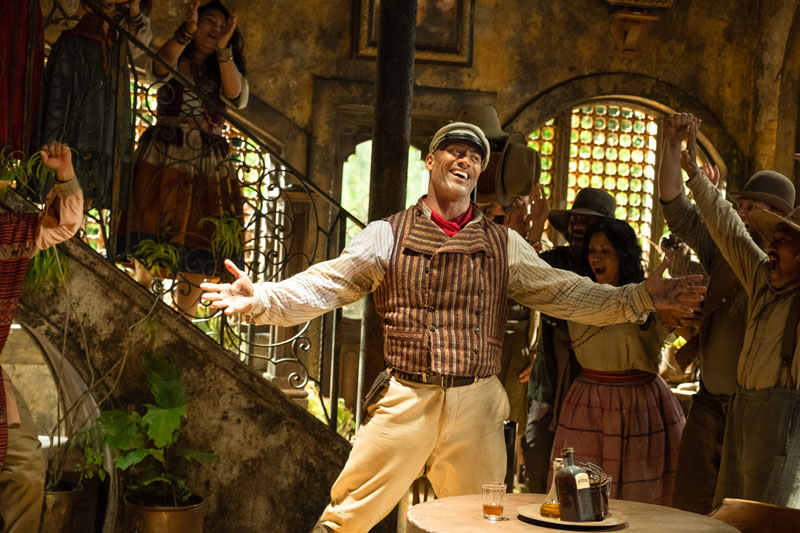 Director Jaume Collet-Serra sets up the action for us: “We meet the skipper, Frank Wolff, on an Amazon River jungle cruise. Basically, he takes tourists on cruises in his old boat, and very much like the ride at Disneyland, he tells stories and has set up all of these gimmicks to get money from the people on the cruise.

“With Lily, we meet her in a sort of Indiana Jones-esque set piece, in which she steals something from the Society of Explorers in London. It’s an action-packed, comedy-filled piece. And that kind of sets the tone of both characters, and the audience gets the feeling that those two characters are going to meet and their personalities are going to clash,” explains the director best known for helming Liam Neeson action thrillers Unknown, Non-Stop, and The Commuter.

Ask Blunt her favourite aspect of filming Jungle Cruise and she doesn’t miss a beat, replying, “Jack Whitehall”, who co-stars in the movie along with Edgar Ramirez, Jesse Plemons and Paul Giamatti. 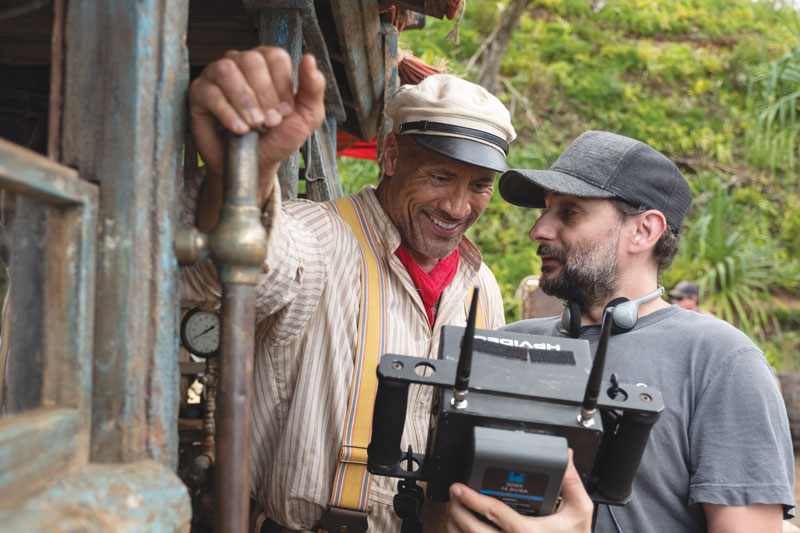 Meeting with Blunt and Johnson in Tyler Perry’s Studios in Atlanta, when STACK asks if the actors formed an instant connection, Blunt is busy replying the affirmative, only to turn around and catch Johnson silently nodding his head.

“Dwayne, did you just shake your head?” she demands, taking him to task.

With Blunt, in many respects, doing the heavy-lifting as Jungle Cruise’s action heroine, she says she took the pressure off Johnson so he could, “Get fat instead of buff. He got so fat. He just let it all go,” she insists as her incredibly buff co-star doubles up with laughter.

The couple are having so much fun taking the mickey out of each other, they almost forget to promote the film. Johnson finally gets back on point, telling us, “It was exciting for me to play this kind of role in this kind of film. And equally exciting that my friend here was able to take on this Indiana Jones kind of role. And especially as a woman.”

Blunt agrees: “I think we both really fell in love with the dynamic between the characters because they are the antithesis of one another. And when they meet, inevitably, there’s going to be some fun chemistry, reminiscent of African Queen and Romancing the Stone, where you’ve got people who are just so polarised in their beliefs and who they are, where they come from,” she says.

Collet-Serra was certainly impressed by Blunt’s willingness to rise to the challenge.

“Lily was completely unafraid as a character, and that was driven by Emily herself and her hunger to be in a movie like this,” he says. “She never thought that she could do all the stunts that she did, and she ended up doing all of them.

“Emily enjoyed doing the action. She told me she had the best time doing this movie, because we gave her the playground and she could almost do everything that Lily could do. She really helped in developing the character and writing her own dialogue. Emily and Dwayne together were just amazing,” he says. 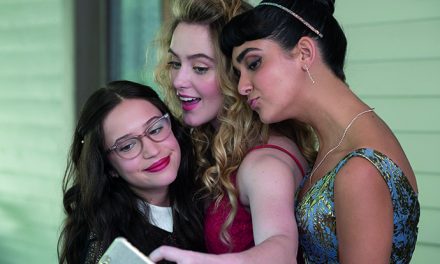 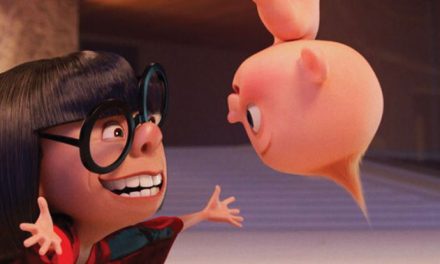 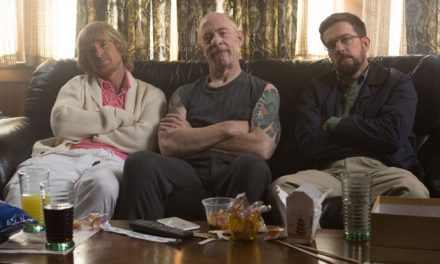