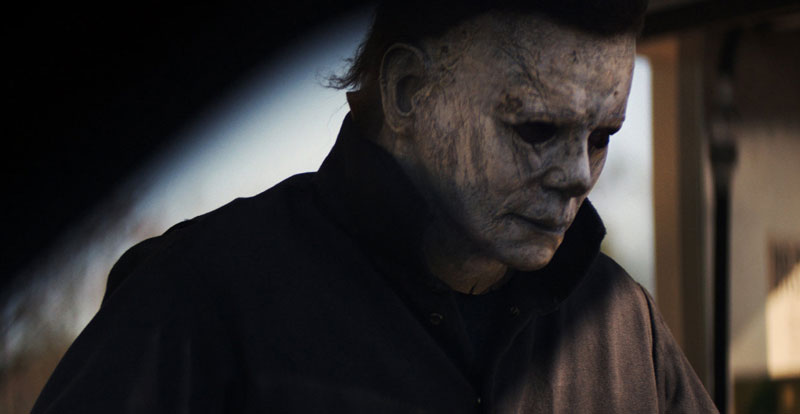 With Halloween Kills hitting home entertainment formats this week, what better time to look back at the changing face – well, mask – of Michael Myers over the course of the long-running franchise.

Appropriately, the grown-up Michael Myers boasts a similar look after returning to Haddonfield and stealing a mask from the local hardware store. But over the course of 43 years and eleven films, that blank, pale and emotionless visage would become less pale, more emotional, and sometimes just plain daft looking.

The changing, err, shape of Michael’s mask is always a hot button topic whenever a new Halloween film arrives, so without further ado, STACK ranks all of them from worst to best… 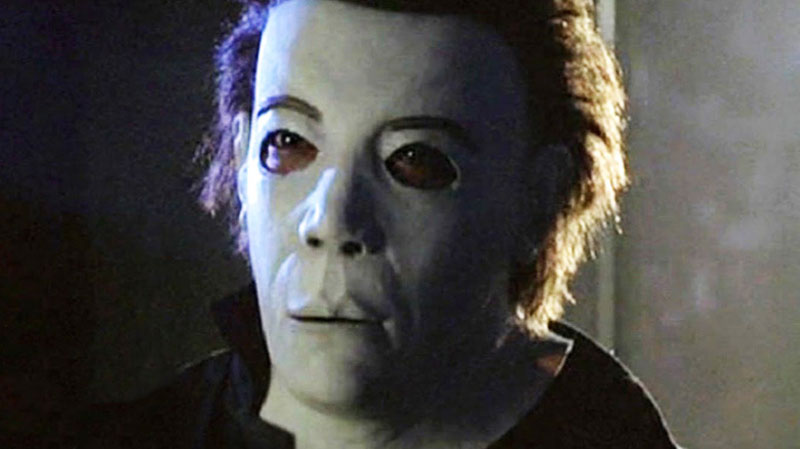 11. HALLOWEEN: RESURRECTION (2002)
Universally considered the worst film in the franchise, Resurrection also features the worst mask. Resembling the sort of unofficial merchandise that you’d find in a Reject Shop bargain bin, it’s not surprising that this iteration was mass produced for sale in US toy stores at a budget price. 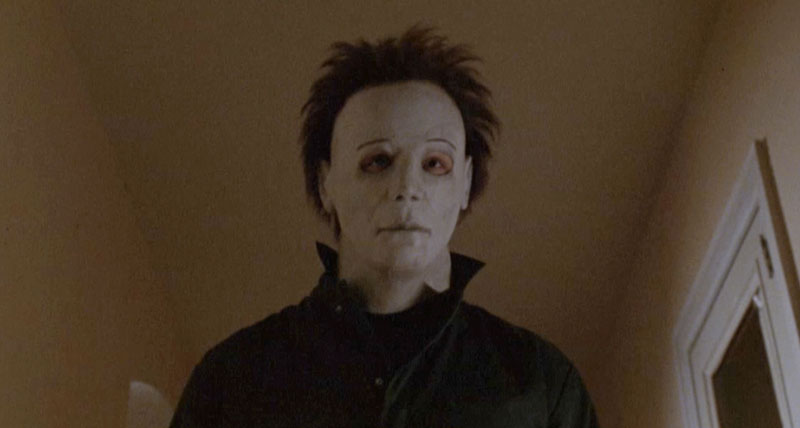 10. HALLOWEEN H20: 20 YEARS LATER (1998)
Another epic fail. Four different masks were used during filming (including an even worse CGI version), so you’d think one of them would have worked. Nope. The wide eyeholes and bed hair made Michael look stupid instead of sinister. And a bit like Simon Le Bon. 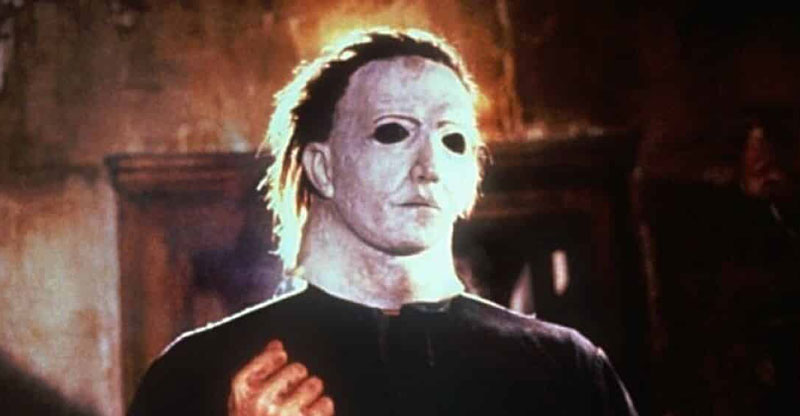 9. HALLOWEEN 5: THE REVENGE OF MICHAEL MYERS (1989)
Another awful sequel with a mask to match. Despite the fifth film picking up where the fourth left off, Michael’s mask looks nothing like the one he was last seen wearing, giving him a longer face, a confused expression, and a mullet in the making. If you squint, it looks a bit like Nicolas Cage! 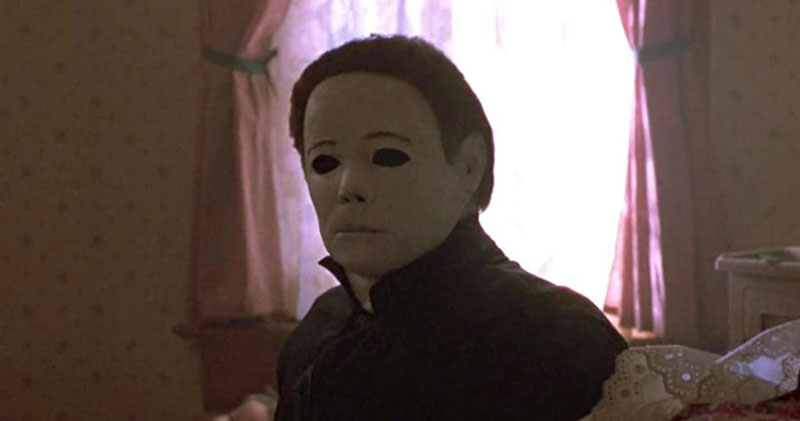 8. HALLOWEEN 4: THE RETURN OF MICHAEL MYERS (1988)
In attempting to replicate the Shatner look for Michael’s third appearance on screen, something went a bit wrong, leaving him with pursed lips, a bewildered expression, and resembling Ricky Gervais. Needless to say, it wasn’t popular with fans. Moreover, a blonde mask was erroneously used (during the school scene), which looked even worse. 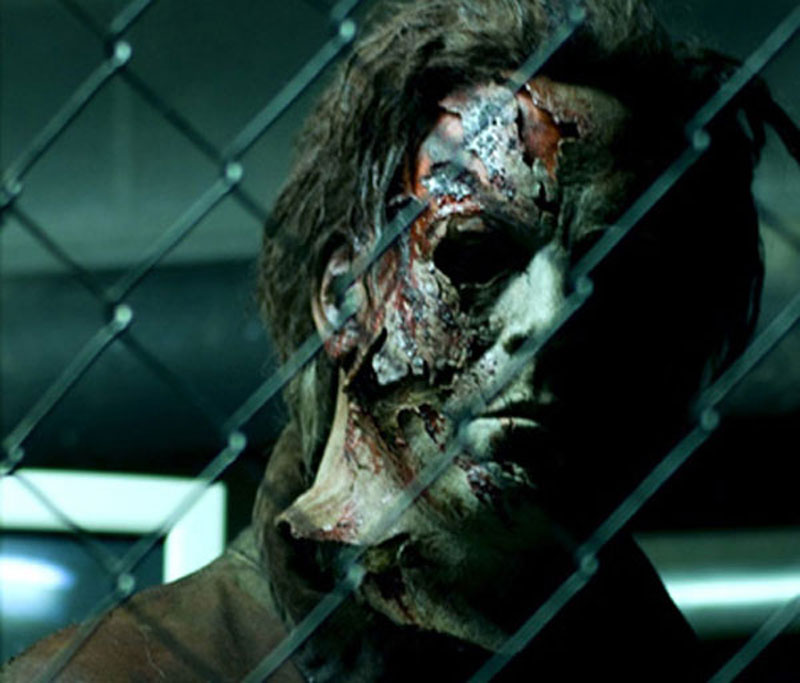 7. ROB ZOMBIE’S HALLOWEEN II (2009)
The same mask design as Zombie’s remake and a good one, albeit more dilapidated and bloody with portions of Michael’s face visible. It’s as though he’s rocking a Leatherface look here. 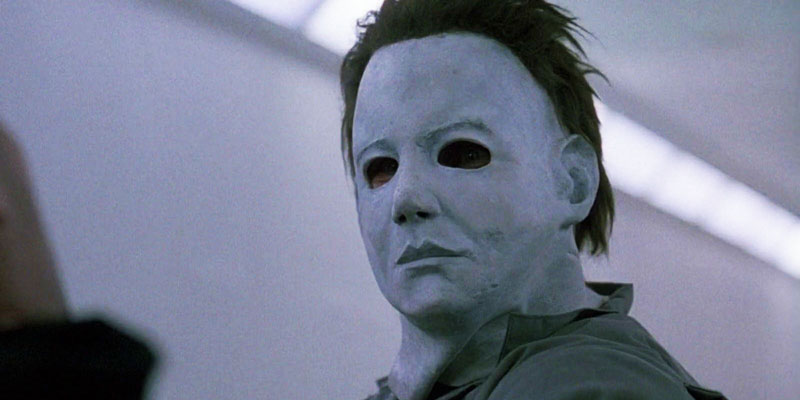 6. HALLOWEEN: THE CURSE OF MICHAEL MYERS (1995)
The sixth movie may have gone off the rails with the whole ‘cult of Thorn’ subplot, but at least they got the mask right. Sort of. It looks a bit too big for his head and boasts lips that Mick Jagger would envy. 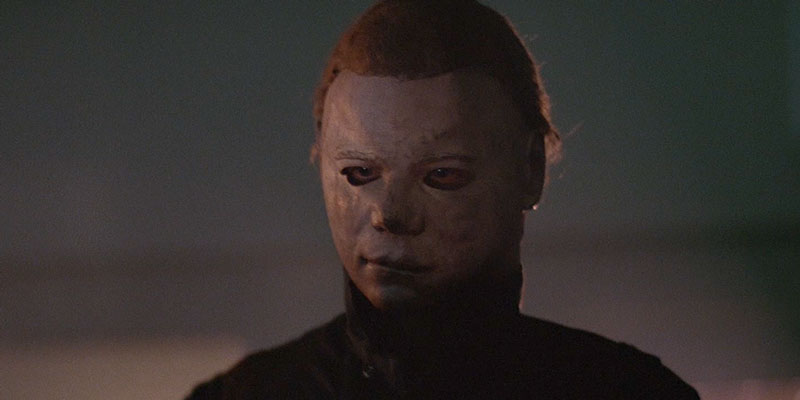 5. HALLOWEEN II (1981)
The original mask had been stashed beneath producer Debra Hill’s bed for three years before being dusted off for the sequel. Faded from age and yellowed from Hill’s heavy smoking, the mask still looks wonderfully sinister, albeit a little more rounded and with reddish hair. 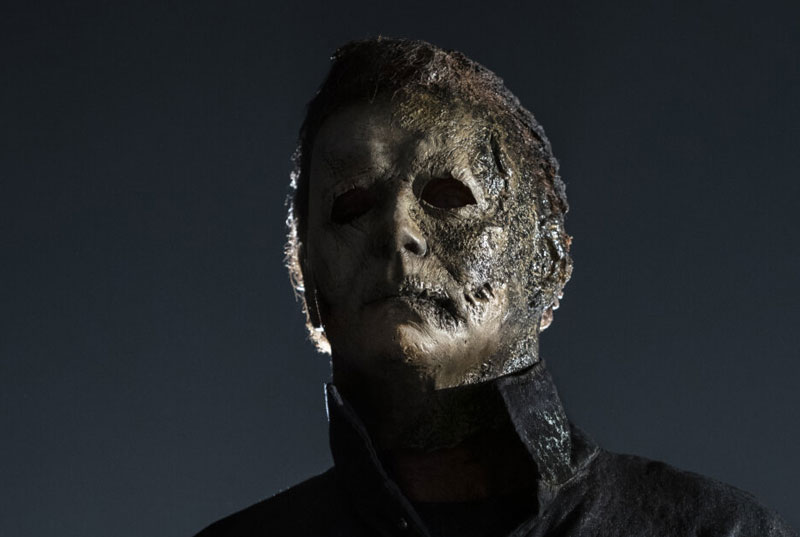 4. HALLOWEEN KILLS (2021)
Michael survived the fire that destroyed Laurie’s house in Halloween (2018), but his mask couldn’t take the heat and now boasts a scorched left side to complement a bullet hole in the right cheek, giving him a zombie-like appearance that’s fitting and chillingly effective. 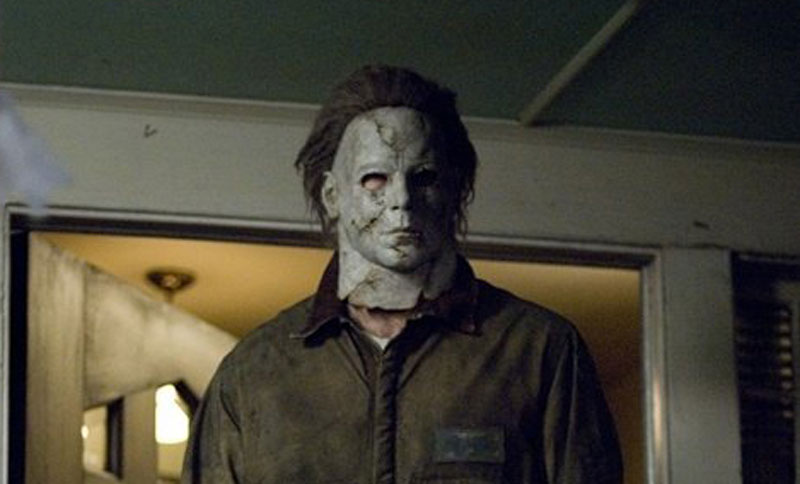 3. ROB ZOMBIE’S HALLOWEEN (2007)
Zombie’s remake may have been rubbish, but at least he got the mask right. It’s very close to the original Shatner design, and the cracked latex look complements the seedy aesthetic of the movie. 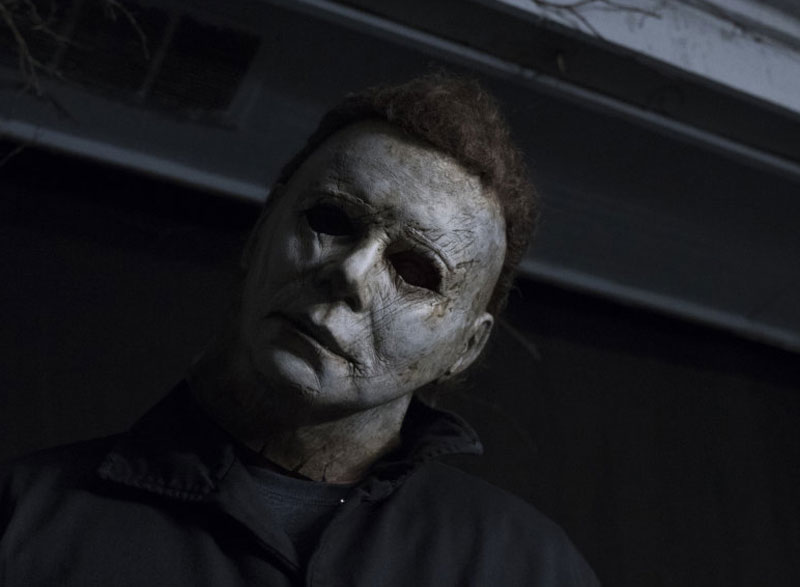 2. HALLOWEEN (2018)
After spending 40 years in an evidence locker, the decades have taken a toll on Michael’s mask. But it’s still recognisable as the Shatner original, now sporting a cracked, weathered and scarred appearance that’s appropriate considering Michael is now in his sixties. 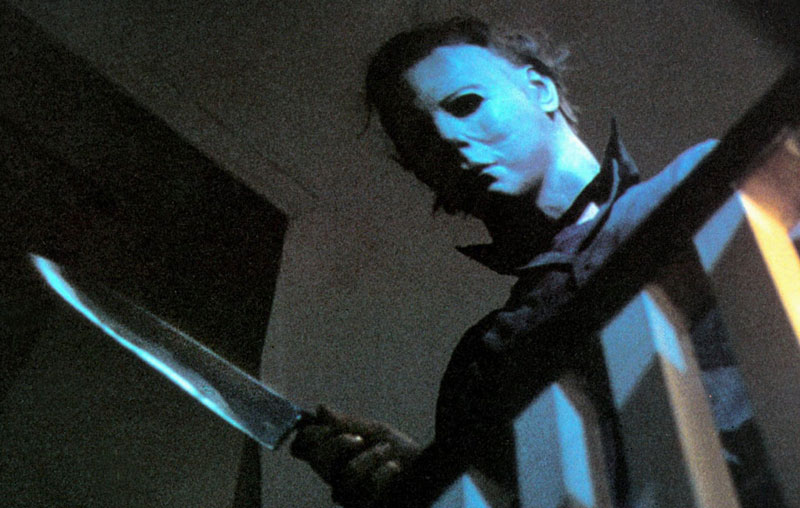 1. HALLOWEEN (1978)
The original and the best. Who would have thunk that a modified William Shatner/Captain Kirk mask could be so scary? Production designer Tommy Lee Wallace did, having purchased it for around two dollars along with a Spock, Richard Nixon and clown mask as a possible contender for Michael’s look. The vague facial features of the Shatner mask made it the perfect choice for the emotionless killer. 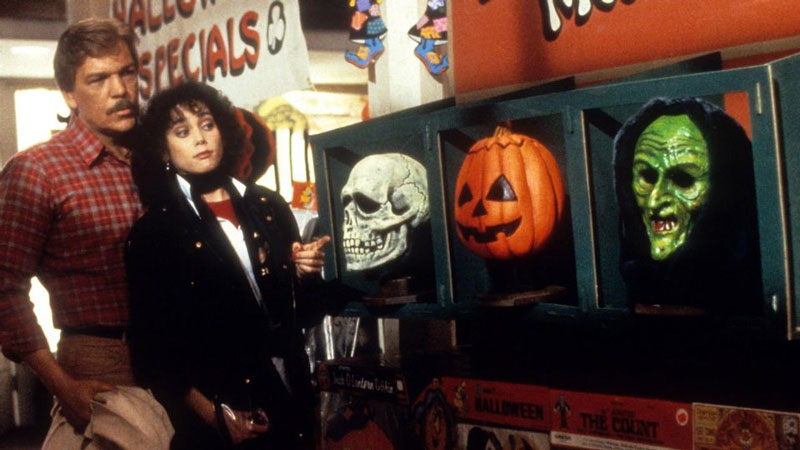 HONOURABLE MENTION – HALLOWEEN III: SEASON OF THE WITCH (1982)
Alongside the original Bill Shatner design, the best masks to be found in the Halloween franchise are in the Michael-free third film. The ‘Halloween Three’ – a witch, jack-o’-lantern and skull – manufactured by the sinister Silver Shamrock Novelties included a nasty surprise on Halloween night, and were promoted with a killer jingle. 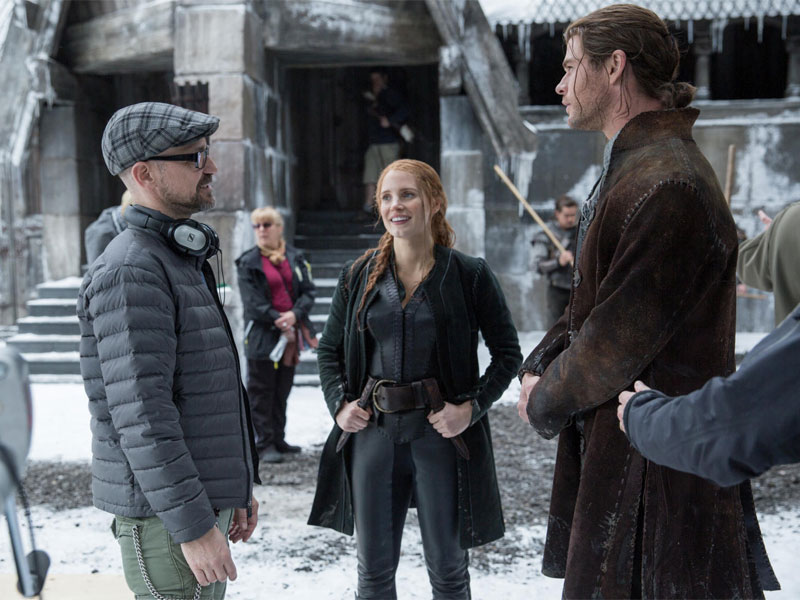 Sisters Doing it For Themselves 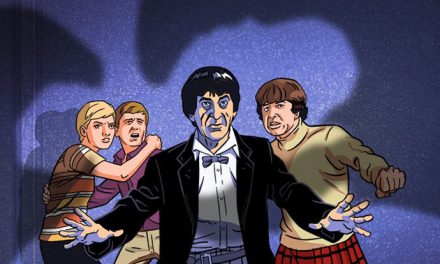 Another animated Doctor Who classic on the way 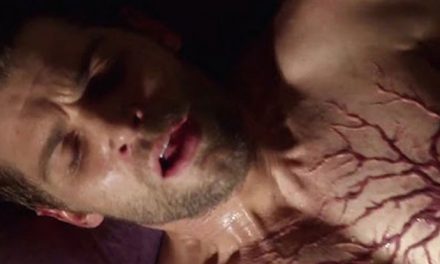 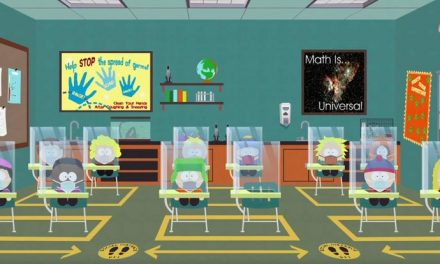