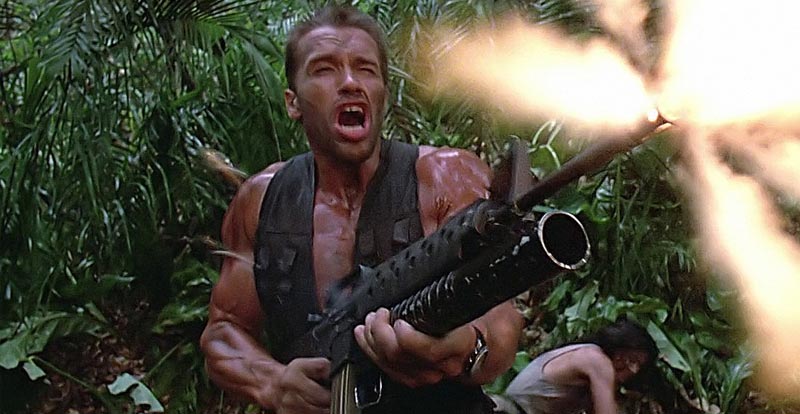 A chameleonic – and rather deadly – alien messes with the heads of everybody from Arnie to Danny Glover and Adrien Brodie in the Predator series. The first three movies now come to 4K, but how do they fare? Is it a case of “Come on! Do it! Do it!” or “You’re an ugly motherf-cker”? 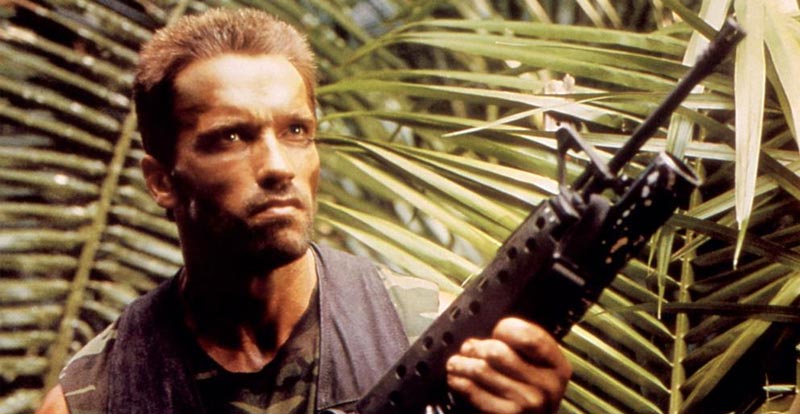 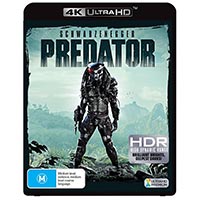 The story: The first of Jim and John Thomas’ Predator tales, directed by John McTiernan of Die Hard fame, sees Arnie and his bunch of commandos called in for what’s sold to them as a standard jungle hostage rescue mission. It isn’t. They’re hunted by a strange, unseen and deadly beast of prey that seems to be toying with them. Will any of them survive to tell the tale?

“Get to da chopper!”

The 4K disc: The last time Predator hit home video was on a Blu-ray that left fans horrified. Somebody had set the digital noise reduction to stun, and it looked like a bunch of figures from Madame Tussaud’s were playing Predator dress-ups. It’s good news time folks, this is an entirely different 4K transfer, and it looks magnificent. Seriously, it looks (adopts dreadful impersonation of Arnie’s accent) absolutely fantastic! Colour is amazing, helped by its HDR treatment – you’ve never seen glowy Predator blood until you’ve seen this. It’s mostly a delightfully detailed presentation, meaning that you can almost count each strand of Schwarze-stubble, and while grain is present – more so in some shots than others due to film source differences – we never found it distracting like it can be in some transfers (hello Ghostbusters!). Things get a tad fuzzy when Predator-vision hits the screen, but then who knows, maybe the alien race wasn’t really up with high resolution technology? (Note to serious types: We are kidding around there).

As for the sound, this does carry over from the Blu-ray – in DTS-HD Master Audio 5.1. Getting past our wish that it had been given a now-gen audio bolstering, it’s still a pretty good track, with pleasing surround effects and lots of oomph given to Alan Silvestri’s ace score. The subwoofer doesn’t exactly bounce around the room, but in all it’s a decent sonic treatment. There’s also a four channel English mix included for cinema purists – have fun!

As far as extras go, this release only contains a single 4K Ultra HD disc, no Blu-ray. Still, we do get a John McTiernan audio commentary, as well as a text commentary from film historian Eric Lichtenfeld. 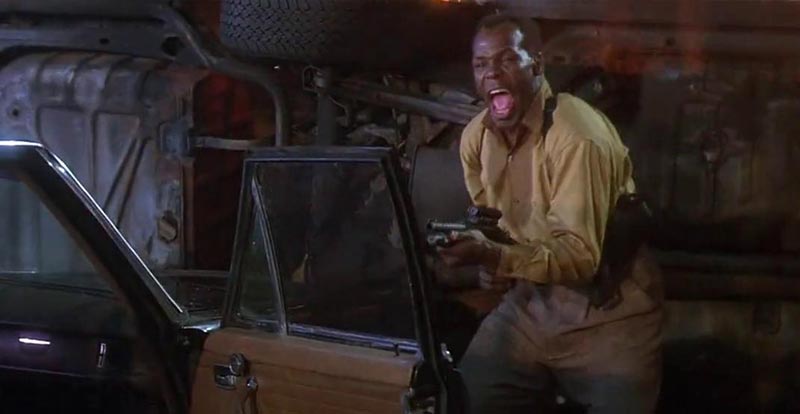 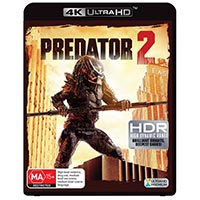 The story: The writing team of brothers Jim and John Thomas return, as the Predator goes to the big city! There’s a gang war going down in 1997 LA, and the LAPD’s Lieutenant Mike Harrigan is on the case. But with whole gangs being taken down without any trace of the perpetrator being left behind, something’s a bit fishy – or is it alien?

“How many times do I have to tell you? You don’t know what you’re dealing with.”

The 4K disc: Predator 2 may not have Arnie, nor the popularity of the first in the series, but it’s still a fun watch – especially when it’s been treated like an A-list VIP on its trip to 4K Ultra HD. Yes, this one looks every bit as good – in fact possibly even better – than Predator. Believe us, that’s some compliment. Once again the disc has been mastered from a new 4K source, given a masterful HDR treatment that brings out detail in the shadows we’ve not seen before, while making the daytime shots of LA pop. Coming from a film source this one also exhibits some grain, but again it is far from obstrusive – and infinitely preferable to OTT digital fiddling.

Audio, meanwhile, is another DTS-HD Master Audio 5.1 mix. Some may disagree with us, but we found it a little weedy compared to the track on the first new Predator disc. The subwoofer barely awoke from its slumber throughout, the soundtrack took a backseat and despite bullets often whizzing all around our head, for the most part things just seemed rather centre channel biased.

With the lack of a Blu-ray being included in this package in mind, all that we get extras-wise is two audio commentaries. The first is from director Stephen Hopkins, while the second comes from writers the Thomas brothers. 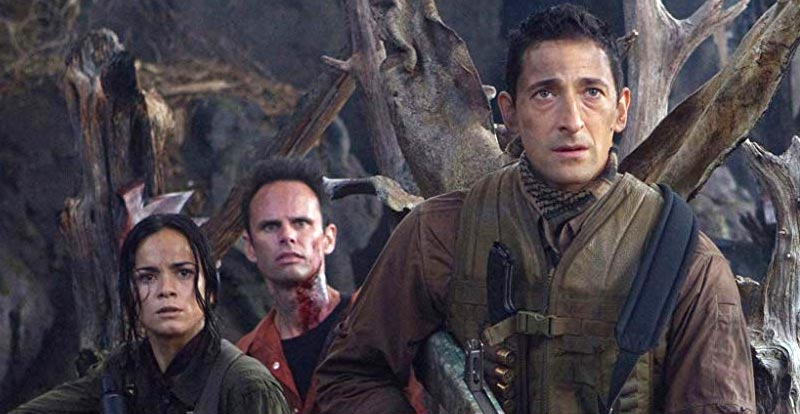 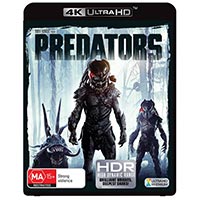 The story: It’s 2010, and relatively unknown Hungarian director Nimród Antal brings us the third main-line Predator flick, which also features new writers. Essentially, it involves Predators hosting their very own real-life game of Fortnite, parachuting in a mercenary, an army officer, a soldier, a dangerous criminal, an African militia member, a drug lord, a Yakuza member and, erm, a doctor and then hunting them down one by one.

The 4K disc: With this movie’s final master completed at 2K, we get an upscaled release here, but don’t stop reading yet. Being a much more modern film than the other two, the picture is pleasingly detailed for such a presentation, and the HDR treatment is something to marvel at. The film has many dark scenes featuring exceedingly bright moments, and they really do scrub up quite wonderfully both as a generally good presentation, and also an able demonstration of why HDR technology is so cool.

Audio-wise we get another DTS-HD Master Audio 5.1 mix, but one where they found the bass. The subwoofer eagerly joins in the party without getting drunk, while the score and dialogue co-exist reasonably deftly. Still, our usual disappointment at the lack of an object-based audio update to Dolby Atmos or DTS:X apply.

The only extra on this one is a commentary with director Antal and producer Robert Rodriguez (who doesn’t seem to go anywhere without his action buddy Danny Trejo).

As well as being available singly, you can score all three Predator films in one handy slip-case – exclusive to JB Hi-Fi. 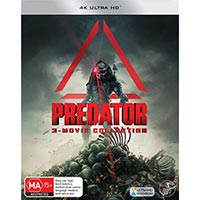 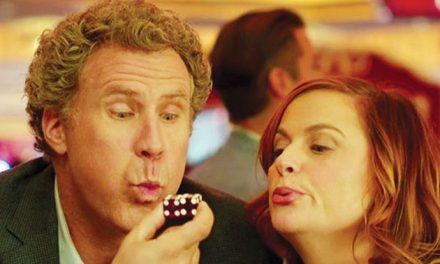 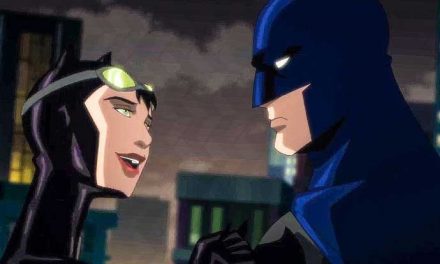 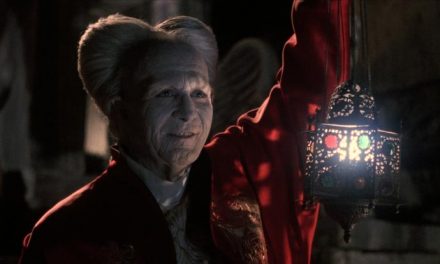 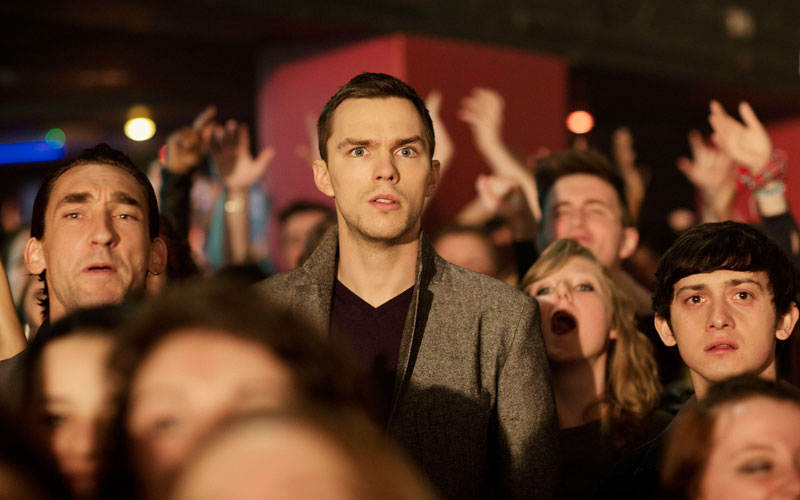