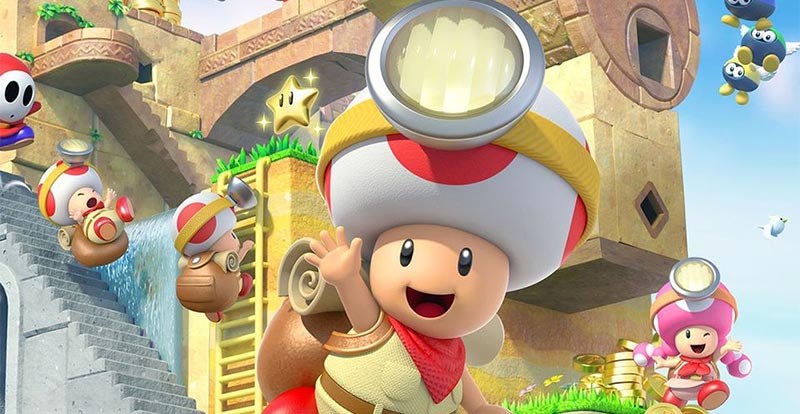 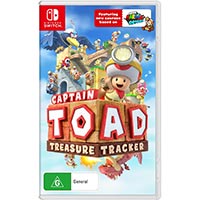 What does Peach’s humble servant Toad get up to during his annual leave? He hunts out treasure! Well, at least according to Captain Toad: Treasure Tracker, which has now hit the Switch. So, is it worth hunting down, or is it best left buried?

Originally an outing on the Wii U, thankfully this puzzler has been given another lease of life on the rather more popular Switch, for it’s a cracking little title.

Taking its cues from sub-levels in the Wii U’s Super Mario 3D World, variously both our intrepid champ-ignon Toad and the lovely Toadette traipse casually around various isometric blocky outcrops that float in the sky in exactly the same way that bricks don’t (apologies to Mr Douglas Adams), searching out – as the game’s title strongly suggests – treasure.

These shiny desirables take several forms, from good old currency in gold coins and gems, to the big ones in end-of-level power stars. Your main weapon here is wits, as you rotate the level all about to uncover hidden delights, as well as to see just where you’re sending your protagonist mushie – be it somewhere useful, or somewhere doomy.

It’s no simple walk in the forest though, with various obstacles getting in the way of progress. From traditional enemies like Shy Guys and Goombas through to a bunch you’ve likely never heard of unless you eat, sleep and fart Nintendo like Conkdors and Blurkers, they all present the need for various strategies to navigate around. You don’t want to fight – you just want that nommy treasure – but if you have to, you’ll lay down some serious Toad-fuelled whoop-arse.

The adventures continue through three sizeable chapters, offering all manner of environments plus many and varied challenges – including the occasional giant boss battle or on-rails escapade, just to keep you on your Toady toes. 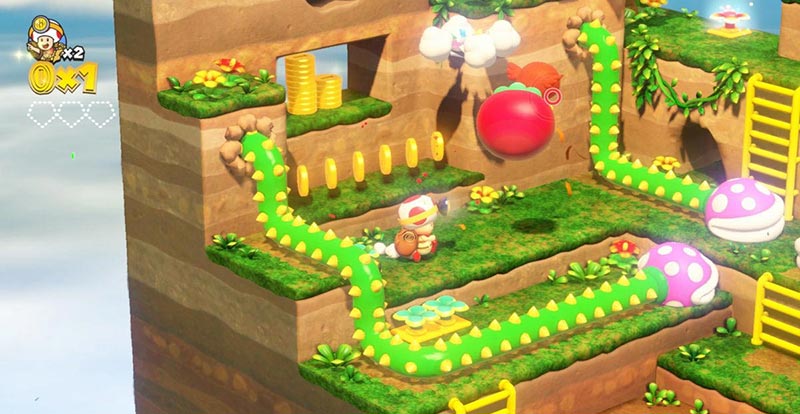 Throw in extra challenges per level involving achieving a specific aim and spotting a teensy pixel toad hiding away somewhere, and there’s certainly plenty for completists to wrap their bonces about.

Being a Wii U game originally, Captain Toad: Treasure Tracker was designed to be played via a handheld screen, and it definitely remains that way with this Switch version. Obviously it’s playable on your telly, but the motion controls required for controlling a cursor and the occasional valve wheel can be very much on the frustrating side. Our biggest tip here? Re-centre the cursor – lots.

Four new levels have been plopped into this Switch version, all based around possibly Nintendo’s greatest masterpiece yet, Super Mario Odyssey. These are themed around New Donk City, Cascade Kingdom, Sand Kingdom and Luncheon Kingdom, and are unlocked after completing the three main chapters. Or, if you can’t wait to check them out, you can just wave a Super Mario Odyssey amiibo at your Switch and unlock them that way.

An absolute visual treat, Captain Toad: Treasure Tracker is one of the most overwhelmingly charming outings that you’ll find for the Switch, combining challenging – but not frustrating – puzzles suitable for those of any age with the exploits of the Mushroom Kingdom’s most unsung hero, Toad. You could say that iIt really puts the “fun” back into “fungi”! (Thank you, ladies and gentlemen! Don’t forget to try the chicken…)

Captain Toad: Treasure Tracker is available now for Nintendo Switch (and 3DS and Wii U).