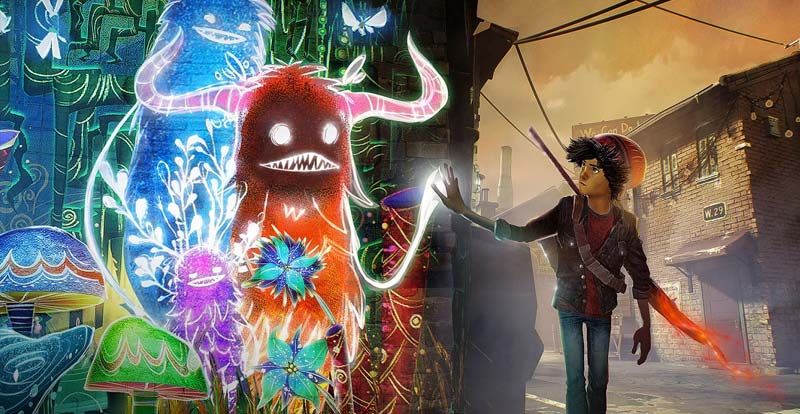 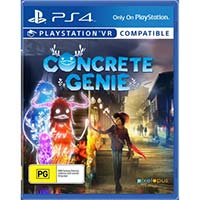 It’s time to get arty in the collision of Jet Set Radio, De Blob and originality that is PS4 exclusive Concrete Genie. But what is the evil that lurks at its heart?

The seaside town of Denska has seen better days. Once a thriving hub of fishing activity, it’s been overtaken by a mysterious malaise known as ‘The Darkness’. So that’s what they’re up to all these years after hitting big with I Believe in a Thing Called Love…

Anyway, young aspiring illustrator Ash still likes hanging out there, but so do a group of bullies, who mercilessly pick on our arty type hero. After they scatter the pages of his sketchbook to the wind, Ash sets about retrieving them all, has a magical encounter and ultimately begins to restore colour to this now drab and lifeless place, via the player waving their DualShock in the air like they just do care (or changing the setting to use the right stick instead – boring).

To this end, Ash has a magic paintbrush, special limited magic paint to combat The Darkness-covered bits of the town and three types of genie eventually at his disposal. As long as he keeps them happy with the odd requested doodle or tickle here and there, they look after him in various ways that help in his various quests. These involve creating amazing artworks from an ever-increasing arsenal of textural brushes, as well as actually conjuring the various genies themselves into existence. Want a red blob with eight protrusions that look like Totoro ears? Go for it! They then spring to life and, as long as they have connected walls, make their way around town as your blobby assistants.

There are a bunch of things to collect, ranging from sketchbook pages to genie bits and those textural brushes. Some are flapping about, others require a bit more searching out. Everything up to this point, other than having to avoid bullies for fear of a dumpster dumping, is perfection. Beautiful, jaw-dropping perfection. Painting the town red, blue, yellow and more and gradually unlocking new areas is a total joy, and pleasantly relaxing while still delivering enough challenge to continually captivate.

Then, like a toilet smashing into your face, things turn completely crap. 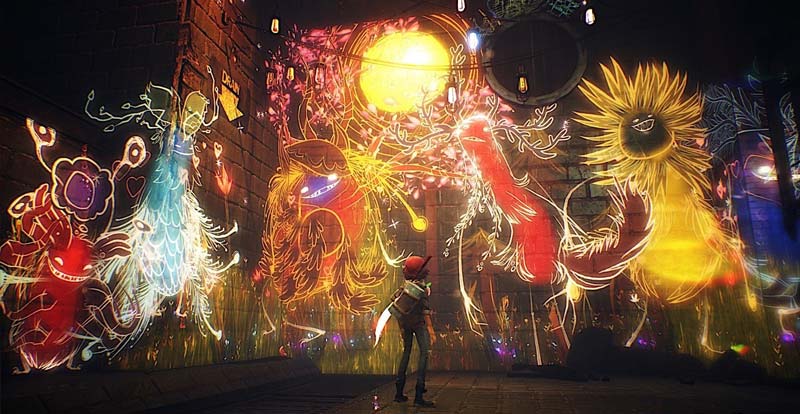 For some reason that remains completely unfathomable to us, the design team at creators PixelOpus apparently decided that there just wasn’t enough Dark Souls in this gentle puzzle game and, about two thirds of the way through, Concrete Genie changes from engaging and calming joy to just another generic, stressful boss battler – and not a very good one at that. You follow Darkness-infected genies around, shooting any of three weapons as you attempt to dim their life bars. Then you keep following them. Still going. Still going. Yawn. Defeated one and tamed it? Have two more! All before a final arena battle that is just more of the yawny same.

The entirety of Concrete Genie – including those utterly crap battle bits, which seem to be there possibly only to a: elongate the game or b: because the designers couldn’t be arsed making the wonderful town bigger to give us more of the awesome first part of the game – takes around six to eight hours to complete, depending upon how much you get distracted by looking for collectibles. It is, however, half the price of most new release games – and six hours of captivating entertainment (well, four until it all turned turtle) – is decent bang-for-buck in our book.

“Then, like a toilet smashing into your face, things turn completely crap.”

Mention must be made of the messages about bullying here (we type after going berserk at the devs about THAT gameplay directional change). While arguably oversimplified, and initially seemingly superfluous, we reckon hearts are generally in the right place intention-wise as the Ash vs bullies story plays out alongside the rest of the experience.

Mercifully once all the shite battle rubbish has been conquered – and you can at least say “Stuff you!” to all those “git gud” idiots and drop it down to a casual level to get past their turgidness – the town is as you left it, so you can freely play, search out collectibles or just have fun painting pretty pictures. There’s also a fab bonus for those who have PlayStation VR, in the form of VR free-painting levels, and a more 3D experience entitled Splotch and the Crystal Canvas, which is simply gorgeous. Well, if you’re the type who likes the arty bits over the farty bits…

Never have we encountered such a resoundingly jarring change of tone in the middle of a game before – and never have we been so besotted with a game only to be so turned off by such a mid-play turn. With more of the wonderful arty first part and none of the hokey, unnecessary battle junk, Concrete Genie would have been a truly special masterpiece. Instead – and sadly – it’s ended up more of a rough sketch. 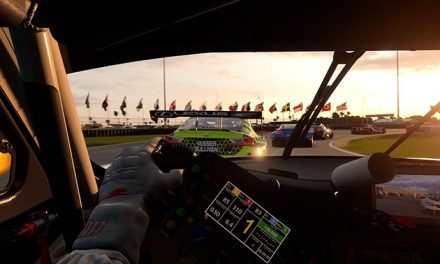