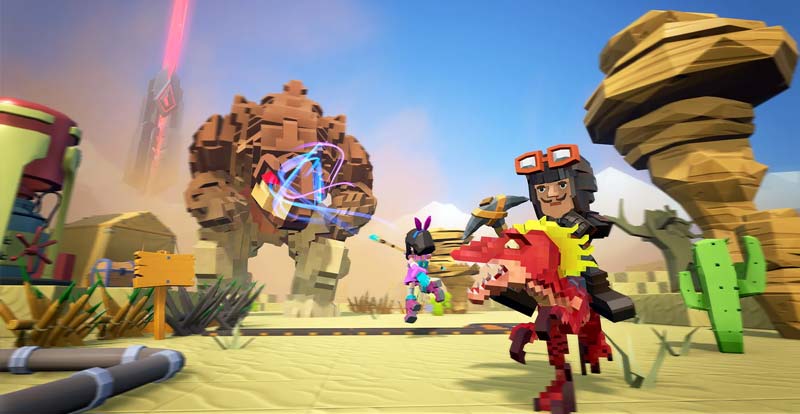 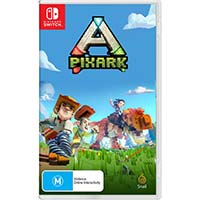 PixARK takes the stylings of Minecraft and the survival elements of ARK: Survival Evolved and blends them up for portable fun on the Nintendo Switch – but is this kind of survival a life worth fighting for?

Dipping into the survival genre these days is like discovering a species forgotten by time. Left to dwell in a metaphorical cave system, the early-access lifestyles of these games leaves them strange, with completely different gameplay priority systems to almost any other genre. This strangeness is mirrored by a developmental business model that’s more off-putting than anything, with games that launch pre-done and go weeks without updates, sometimes even jacking up their prices as they spread to more platforms.

Such is the impression given by the opening moments of PixARK, originally released in 2018 and now finding its way to Nintendo Switch and PlayStation 4.

PixARK sits snugly in the ‘sandbox’ ‘open world’ ‘crafting’ ‘Minecraft-wannabe’ area of early access titles that have swung to a proper release. Based mainly on a cycle of resource collection and crafting, PixARK (and its big brother ARK: Survival Evolved) includes a menagerie of dinosaur critters to tame and hunt. You’ll craft tools, discover new materials (which you definitely would have discovered before in other sandbox outings) and be set loose upon the world to make what you can of it.

Much of the content that you’ll find in PixARK is procedurally generated – that is, pulling from a list of variables, the game will ask you to complete random tasks for rewards, or generate different zones on the map, each with a unique climate. The narrative is what you make of it alongside other players online, which is to say there’s not a tonne there.

On the face, all of this is fine, as procedural generation and a lack of story can clear the way for the mechanics of a game to shine. We’re reminded of the likes of Dead Cells or Rogue Legacy, games that randomised their environments around consistent elements like boss rooms and biome layouts. In the case of PixARK, the joy or investment you’re going to develop with the game is going to rely on just how cool you find its consistent elements to be. How badly do you want to ride around on a pixelated triceratops in your make-believe block world? How much rough design are you willing to put up with to do that? 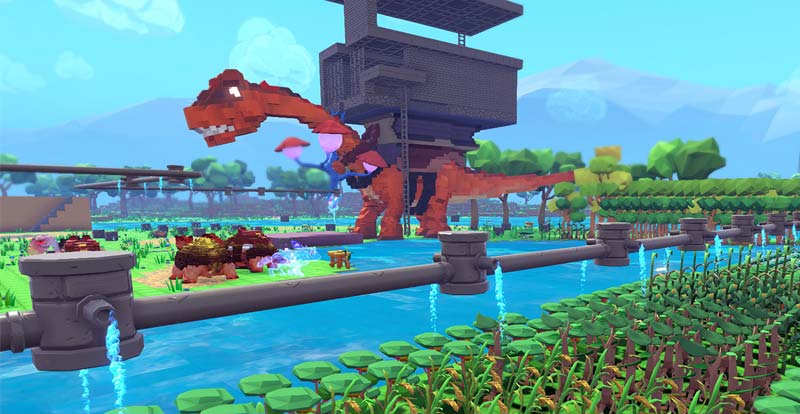 Many of the vectors of interaction with PixARK currently feel unfinished. From the perfunctory start-up and server menus to the slightly adrift opening hours after you descend onto its blocky landscape, PixARK has a hard time providing a unique experience beyond the art-style.

The Nintendo Switch is an admittedly underpowered device which usually makes up for it in its portability. PixARK simply underwhelms on it, with it’s simplistic art style failing to run at a smooth frame rate, without issues like pop-in or a weird ‘fuzzy’ resolution which comes and goes, like a camera going out of focus. The game maintains its original PC design, which means you’ll be navigating a mass of upgrade menus and inventory screens before you even know how to craft a campfire. Not many concessions are made with console players in mind, aside from the odd radial menu for quick settings. Playing portably has its own set of issues, with the Switch’s sleep mode causing lost connections and forcing a return to drawn-out load times to get back into a server.

When it comes to navigating the world, your blocky little person feels a bit sluggish, with a strange inability to run diagonally. Even early game requirements – like collecting grass for ‘Thatch’ or digging in the ground for ‘Flint’ – feel like chores when there should be a feeling of endless possibility. Considering the amount of resource collection that you must do to progress in PixARK, the broader game doesn’t streamline that experience terribly well.

Tool tips and HUD elements simply invade your vision as you play. ‘Large Big-Ear Rabbit – LVL 22’ with two inexplicable icons hovers across the screen. ‘LEVEL UP IS AVAILABLE! Access Inventory To Apply Points!’ insists the massive yellow text at the top of the screen. The top left and bottom right areas are where you can learn about the temperature, your weight amount, the forecast for the day, consult a big ‘ol compass, determine whether you’re in combat or not, see what part of the map you’re in, learn the name of whatever ‘Tribe’ you’re in, or ascertain the literal sea-level-equivalent number for how many blocks are between you and the bottom of the world – a place to where, presumably, one could dig far enough and fall into nothingness. The thing is, it’s just a lot.

PixARK is intended as a game where you make your own fun. Its pre-release multiplayer servers read ‘0/70’ for player-count in our time with it, so the mystery of whether other humans can improve the situation remains shrouded (but let’s be honest, more people rarely tend to improve these things).

Having seen the game played on a PC, it’s clear how many of the practical issues are solved when using the intended control scheme. As it stands on Switch, however, these issues cannot be ignored. Playing PixARK solo is admittedly not the intended experience, but for what is there, and what we can see at the moment, it is somewhat disappointing.

PixARK is available now for PS4, Xbox One and Switch.