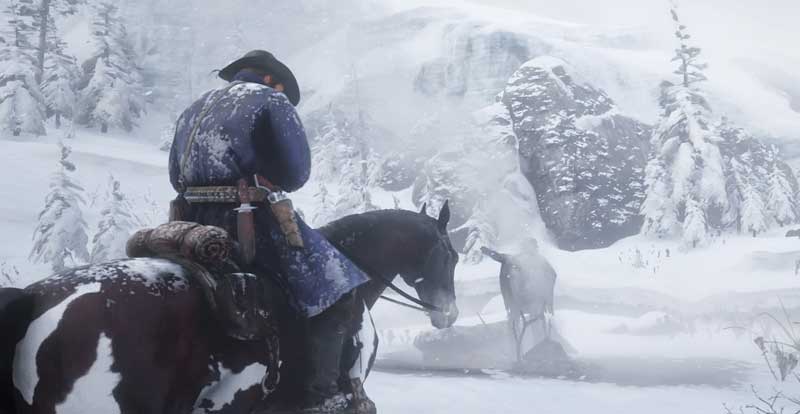 The cowboy’s life ain’t easy. That seems to be the opening message of Red Dead Redemption II, Rockstar Games’ third foray into the old west, and its second in the story of the Dutch Van Der Linde gang.

Interestingly enough, where 2010’s Red Dead Redemption had you hunting down and dispatching with the last remnants of the Van Der Linde gang as former member John Marston, RDR2 puts you in the shoes of Arthur Morgan, second in command to Dutch Van Der Linde and general caretaker of the gang’s diverse family.

Set 12 years prior to the events of the original story, Read Dead Redemption II follows the struggles and exploits of the gang as they come to realise that their way of life is dying. As Arthur comments early on: “seems the world doesn’t want folk like us no more”. The world is shrinking, civilisation is expanding, and Van Der Linde’s people are worth more to the world with a bullet in their back than a bounty on their heads.

The writing here is far more mature than anything in Rockstar’s past – where the original Red Dead did indeed touch on the topics presented here, it also dipped into racist depictions of the Irish, and had a ‘comedy’ character that was a necrophiliac; Red Dead II is more nuanced and emotive, reminding of the same malaise that permeated through a game like L.A. Noire. There are also touch-stones in recent modern western films such as Slow West and Bone Tomahawk.

Arthur’s dedication to the group serves as the basis for not only the story, but the gang’s home base too. Unlike John Marston of the first game, Arthur Morgan ain’t a lonely roamer, he and the gang are travelling nomads.

Every morning, the campsite bustles as NPC characters mill about, preparing for the day. This living, breathing camp is one of the most impressive accomplishments of Red Dead Redemption II. Arthur’s interactions with all of these characters aren’t confined to a Bethesda-style conversation system – they’re more free-form. Locking on to a character with the left trigger will allow Arthur to ‘Greet’ or ‘Antagonise’ the person, and they’ll have their own conversation freely without interrupting what they were already doing, whether it being tending the fire, playing the banjo, or preparing dinner for the gang. Dutch will wax lyrical about the ‘great future’ the gang has ahead of it, and guards posted around the campsite will call out a “who goes there?” as Arthur returns for the night.

It’s this detailed flow of experience that is the true achievement of Red Dead Redemption II. The way in which Arthur transitions from the solitude of the wilderness to the bustle of St. Denis, or even how a quiet mining town explodes into a outrageous prison escape shoot-out. Everything happens within the context of everything else, like the blood on your shirt from a robbery sending your next victim running in fear at the sight of you.

In fact, the writing is so good, the world so rich, that it almost becomes a disappointment when things escalate to a shoot-out. At times the controls can be clunky; Arthur’s extremely detailed animations are at times unwieldy to wrestle with, resulting it a lot of missed shots and frustrating deaths in the early game. The breadth of mechanics at play can also be overwhelming; not being able to get to a mission marker due to a prior murder (in self defence!) because the law of that region won’t stop sending bounty hunters after you can be immensely irritating when all you want to do is progress the story.

The mission structure is perhaps the most familiar to Rockstar fans – you’ll travel to a marker, get a cutscene, travel again with some character dialogue, and eventually have a shoot out or some other kind of hijinks, usually. During missions or even just roaming the countryside you’ll find yourself relying on your horse more than ever before – Rockstar has invested in turning what used to be just a method of transport into a mobile base of living. Your horse carries your weapons, animals you’ve hunted and killed, and more. Getting attached to the creature is almost unavoidable.

Rockstar’s rendering of the fictitious states of New Hanover, Ambarino, Lemoyne (along with the entire map of the previous game) is, in a word, astonishing. You have never seen the old west look this good. The beauty is in the smallest details – the NPC tracks through the muddy streets of Valentine, or the sun resting on the rocky mountains of the opening, to the procedural growth of Arthur’s beard and hair over time, not a single expense was spared. Red Dead Redemption II is the most accomplished portrayal of the old west I’ve personally ever seen, and I expect the richness of its world will reveal itself even further over time.

Red Dead Redemption II is available now for PS4 and Xbox One.