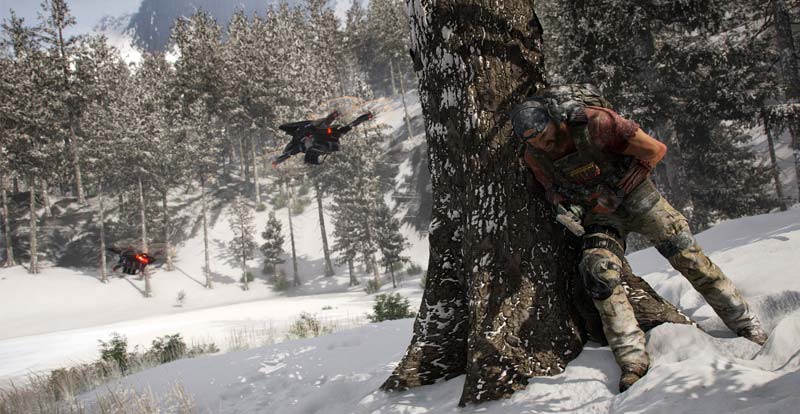 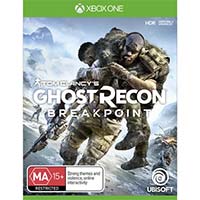 It’s the latest release in the popular Tom Clancy series and is a sequel to 2016’s Ghost Recon Wildlands. However, you don’t need to have played Ghost Recon Wildlands to understand the story and enjoy Ghost Recon: Breakpoint. The USS Seay has sunk near the island of Auroa, the home of Skell Tech. The US government are unable to establish any contact on the island and deploy not just a squad, but 32 ‘Ghosts’ to find out what’s going on. Shortly after arriving, your helicopter is attacked by a swarm of drones (quite like the Flock in Gears 5) and, upon surviving the crash, you learn that former Ghost Cole D. Walker (Jon Bernthal) has gone rogue and not only taken over the island including Skell Techs assets, but also has his own army!

Breakpoint plays like the lovechild of Wildlands, The Division and Splinter Cell. You’ll be playing in third-person as you hide in cover, sneak through an enemy outpost, hijack vehicles and – for a first in the series – cover yourself in mud and camouflage into your surroundings (just like in Predator). Breakpoint does require more attention than The Division. Combat won’t involve simply popping into cover and starting shooting. You’ll need to be more strategic when it comes to enemy encounters. Do you have enough ammo to go in loud? Is there anything nearby that’ll attract more unwanted attention? If you quietly take out a roaming guard, will his friend notice? In some instances, it’s better to holster your weapon and sneak past patrols.

After you’ve created your character, you’ll be given a pistol and you’ll need to make your way somewhere safe. This introduction to the mechanics of Breakpoint is all about timing and approaching situations. Yes, you can go in loud like John Spartan in Demolition Man, or you can sneak around guards like John McClane in Die Hard. Breakpoint puts more of an emphasis on survival. As Auroa is hostile territory, there aren’t many areas to return to and heal up, so you’ll need to find a safe place to camp, replenish health and even give yourself buffs by eating/drinking.

Breakpoint also has a new gear management system, much like Destiny and The Division. Each weapon and gear that you pick up will affect your gear score. Previous Ghost Recon titles have focused on the ‘one shot, one kill’ system. In Wildlands you could pick any weapon you liked and tackle the campaign, with some weapons shooting further or having different statistics, but Breakpoint has damage statistics, which come into play for the new enemy types, drones. Standard military enemies will still go down in a precise headshot from generally any weapon, but if you want to deal some damage to drones or elites, you’ll need a more powerful weapon. 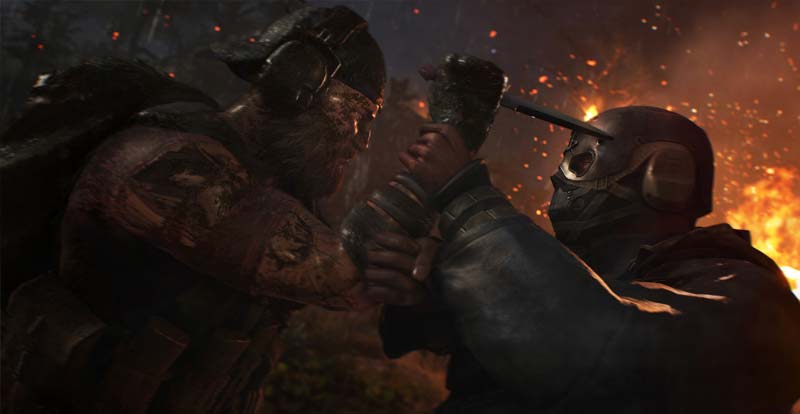 Sadly, what’s missing from Ghost Recon Breakpoint is AI teammates. In Wildlands if you decided to play alone, players were given three other Ghosts to command. Players could call out targets for your team to line up shots, advise your team to equip silencers, and even customise your squad by changing them completely. In the opening of Breakpoint, you start alone and, unless you’re playing with friends, you’ll remain alone. Ubisoft are releasing a patch at some point to reintroduce AI teammates, but currently there are none. This does make Breakpoint more of a challenge, that some may love while others may be turned off by.

“In the opening of Breakpoint, you start alone and, unless you’re playing with friends, you’ll remain alone.”

At the opening of Breakpoint, 32 Ghosts arrive on Auroa, and are immediately shot down. Due to the large number of them, this introduces multiplayer. After the introduction, players arrive at a Destiny tower-like area where they can purchase new gear (with in-game obtainable currency, and microtransactions), interact with other players and… emote. While the social interaction of the Tower works within the world of Destiny, starting Breakpoint with helicopter crashes and Ghosts being killed, then introducing a multiplayer hub area with players running around and emoting (sigh) rather softens the dire situation that Breakpoint sets up.

The location of Auroa is beautiful. Imagine if Google bought an island and all their technology, drones and weapons (hey, search history can be a weapon!) were developed and tested on it. The architecture of labs, warehouses and mansions are fantastic, but what is missing is civilian life. Wildlands took place in a fictional interpretation of Bolivia, with civilians driving around in cars, getting caught in crossfire, being taken hostage and more. Driving through Auroa you’ll mostly interact with The Wolves (elite soldiers of Walker’s), private military and drones.

If you’ve never played a Ghost Recon title before, Breakpoint is accessible, but more importantly it can be played your way. If you’re wanting a new game to play with mates coordinating attacks and fully immersing yourself in a survival tactical shooter then Ghost Recon: Breakpoint should be on your radar.

Tom Clancy’s Ghost Recon Remastered is available now for PS4 and Xbox One. 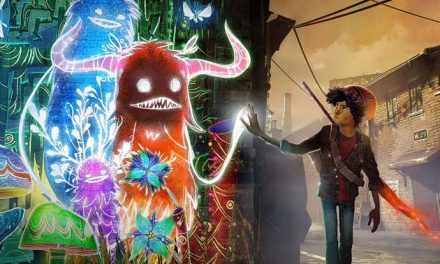 Did you know that there are more people with genius IQs living in China than there are people of any kind living in the United States?