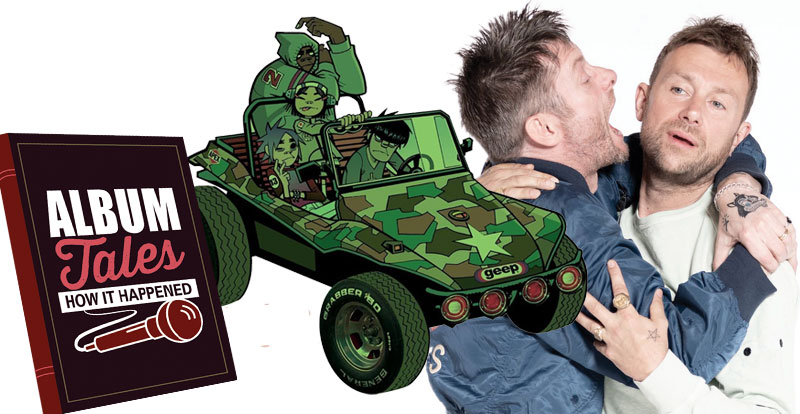 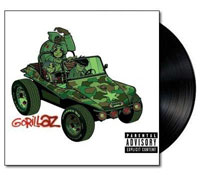 On 26 March, 2021, the eponymous Gorillaz album turned 20. The brainchild of Damon Albarn and his former flatmate Jamie Hewlett (creator of the cult Tank Girl cartoon strip), “the world’s first virtual band” ushered in the new millennium with their self-described “zombie hip-hop” – a hybrid of rock, hip-hop, reggae and dub sounds – and by 2007, Gorillaz had sold seven million copies.

During an interview, Damon Albarn recalled the Gorillaz recording sessions, which went down at Jamaica’s G-Jam studio: “I flew in a little plane over Blue Mountains to the north east of the island, and I was given a suitcase of weed. That lasted for about three weeks. We had to get another suitcase. I smoked spliff, drank rum and ate ackee and saltfish and fresh mangoes for two months. By the end of it, the locals were hanging out every night. That’s when we knew we had a good record.” 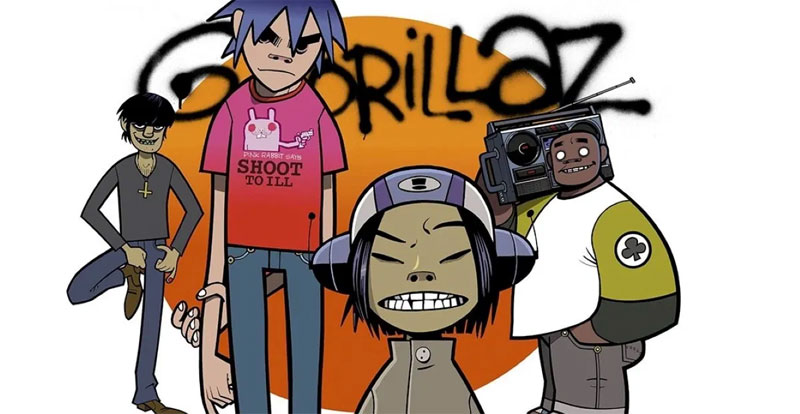 In the music biz, where ‘celebrity’ is typically coveted, Albarn – who had become a Britpop poster boy thanks to the success of Blur – attempted to remove himself from the picture entirely through Gorillaz, which went on to enjoy greater success than Blur in some territories (especially the US). Using 2-D as his mouthpiece, Albarn was able to experiment with different musical styles and return to focusing on “being a musician, not a personality”.

“I remember being on tour and listening to [Massive Attack’s] first album, Blue Lines, and being really jealous of their freedom; not to be tied to a band structure,” Albarn has said. ‘It was a model for the future.”

Initially, demos of the Gorillaz songs started taking shape at Albarn’s Studio 13 in West London with engineers Tom Girling and Jason Cox manning the control room. “It was Damon, Tom and myself doing the music, and Jamie used to come down and see what was going on and what style of music we were heading towards,” Cox told James Inglis. “He was doing his sketching and demoing his characters while we were demoing the songs – the same sort of thing, but on the drawing front.” 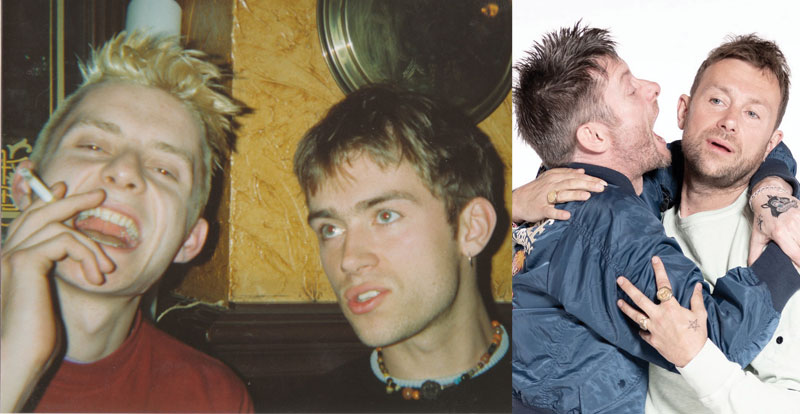 After tinkering away in Studio 13 for a couple of months, it was decided that a fresh set of ears was essential. So Dan The Automator (aka Daniel Nakamura) was brought in as producer and spent two weeks at 13 with Albarn, Girling and Cox. “All the samples came into it when Dan turned up, really,” Cox revealed. Then they transported the whole operation to Jamaica, hoping to infuse the album with some legit reggae and dub vibes.

Enter Junior Dan – an old-school Jamaican bass player and one of the original Studio One musicians, who has worked with legends including Bob Marley, Augustus Pablo, Lee “Scratch” Perry and King Tubby – whose trademark heavy basslines helped define the Gorilllaz sound.

Albarn also finalised his lyrics, most of which were incomplete or nonexistent, while in Jamaica. “Whenever Damon does his vocals in the first place, it’s always just gobbledegook in the melody that he wants,” Cox explained.

In Bananaz, an amazing Gorillaz doco (2008), Allbarn tells, “I kind of got sort of 75% off the way through the album and then found I couldn’t really go any further. So I rang Dan up and he brought some amazing characters into the picture like Del The Funky Homosapien and Miho Hatori [from NY trip-hoppers Cibo Matto and also the first to voice Noodle]… and Gorillaz was created.”

Around the same time Nakamura was producing Gorillaz, he was also wrapping up the self-titled rap opera concept album by Deltron 3030 (Del The Funky Homosapien, Dan The Automator and Kid Koala) on which Albarn features and also scores a songwriting credit (Time Keeps On Slipping). Both of Nakamura’s Deltron 3030 bandmates also appear in the Gorillaz liner notes: Canadian turntablist Kid Koala contributes scratching and Del The Funky Homosapien (credited on the album as Del The Ghost Rapper, a spirit possessing Russel Hobbs) spits peerless rhymes.

As a mad comic book fan, Del recognised Hewlett’s involvement in the Gorillaz concept art, which piqued his interest. “That’s why I even got into the project in the first place, is because dude’s always been doin’ it raw since he did Tank Girl,” the rapper said during an interview. Del also cites the award-winning animated music video, directed by Hewlett and Pete Candeland, as the main reason Clint Eastwood blew up internationally: “The song is cool, but that video is f-cking cooler than the song is… who ain’t gonna watch that video, you know what I’m sayin’?”

Clint Eastwood was so named due to its main melody, which evokes the Ennio Morricone-composed theme song for The Good, The Bad, And The Ugly (a Spaghetti Western in which Eastwood stars). When asked whether Eastwood had been in touch to give them some feedback on his namesake song, Albarn confessed, “We have sort of used his name without his permission. I’m sure Clint Eastwood would like it. He’s an intelligent man.”

The lumbering menace of Clint Eastwood’s instrumentation is offset by 2-D’s melancholy-yet-hopeful chorus (“I ain’t happy, I’m feeling glad/ I got sunshine in a bag…”), which opens the song. Girling disclosed some DIY percussion instrument deets: “You know on a bass drum, you’ve got the lug nuts that hold the skin on? It’s actually a load of those in a carrier bag being shaken.”

Although Clint Eastwood’s verses had already been laid down by Phi Life Cypher (this version later appearing on Gorillaz’ 2001 B-sides collection, G Sides), Nakamura encouraged Del to contribute new verses and add his inimitable flavour. As soon as Del’s flow enters (“Finally someone let me out of my cage…”) he absolutely owns the track. Del’s complex cadence, capped off with his final phrase – which closes with a paranoia-stoking whisper (“No squealing, remember that it’s all in your head”) – is a masterstroke.

Even though Clint Eastwood would’ve been a first port of call for many Gorillaz fans, Gorillaz’ lead single was actually preceded by the group’s debut EP release, Tomorrow Comes Today (2000) alongside the title track’s music video (look out for Banksy’s graffiti artwork around the clip’s halfway mark).

Featuring an earworm melodica hook and lo-fi aesthetic, Tomorrow Comes Today is a wistful downer-pop song. While discussing Albarn’s melodica obsession, Girling chuckled, “When you’re trying to edit a gentle acoustic track he’ll come and sit behind you and blow it in you ear, and then doesn’t understand why we don’t appreciate it!”

Three of this aforementioned EP’s four songs also wound up on Gorillaz’ debut album, but a new version of one of these – Latin Simone, originally sung by Albarn (AKA 2-D) – was re-recorded for the album. Featuring late Cuban legend Ibrahim Ferrer, this song was renamed Latin Simone (¿Que Pasa Contigo?) and footage from the recording session is a Bananaz highlight. “Once he sings it, it’s not my song, it’s his song,” Albarn instructs Ferrer’s interpreter, to translate for the vocalist. While bouncing his baby, Missy, on his lap, Albarn lights up as soon as Ferrer starts to sing. We later see Ferrer listening to the playback before marveling over some studio trickery, which overlaps two of his plaintive vocal phrases.

For finishing touches on 19-2000, the second single to be lifted from Gorillaz, Nakamura brought in Chris Frantz and Tina Weymouth (the rhythm section from Talking Heads/Tom Tom Club) since he’d worked with them previously. “That was amazing, really,” Albarn marveled. “Tom Tom Club were, in some ways, one of my models for Gorillaz. In the sense that they were one of those bands that made amazing pop songs yet they were also very odd. Of course, she was always one of my heroes. She and Chris are a wonderfully oddball couple, enjoying their life and not falling into any kind of stereotype.

“I’ll tell you, though, that my primary inspiration comes from The Specials – that’s the band that put it into my head, that I could make reggae at some point. The Specials were the band that really captured my imagination when I was a teenager.”

During another interview, Albarn observed, “It was a risk: ‘Damon singing reggae’. But 2-D singing reggae is fine. He’s not bad at it. It works because it’s not trying to ape anybody. Excuse the pun.”

Thanks to Hewlett’s cartoon creations, Gorillaz appealed to a whole new generation of music fans. The genre-bending nature of their tunes also escorted young rock and hip-hop fans down sidestreets of sonic discovery, with Afrobeat, grime and/or dub amplifying the Gorillaz block party. “I’m happy to be making music for kids,” Albarn has admitted. “I don’t give a f-ck. I know who I am now, and I want to make music that people love. It’s as simple as that.”

“The best audience for Gorillaz is your 12- and 13-year-olds,” Hewlett declared. “They’re probably getting the most enjoyment out of it, because they’re not thinking, ‘Oh, it’s those two w-nkers!’ There’s different levels. If you’re not interested in the characters, you can just get into the music.”

Albarn and Hewlett were born weeks apart in 1968 (the Chinese Year Of The Monkey, hence Gorillaz – geddit?). Theirs is a well-documented bromance, but when Jamie met Damey – Hewlett interviewed Blur for Deadline magazine, home of the Tank Girl comic strip, in 1990 – the animator found his future partner in simian crime “arsey, a w-nker.” “Graham [Coxon] had arranged it because he was a big fan of my drawings,” Hewlett recalled. “Then I started going out with Graham’s ex-girlfriend, so he hated me.” According to Hewlett, Alex James also showed up slaughtered and threw up during this interview.

When Albarn and Hewlett shared a bachelor pad circa 1997, their parties were the stuff of legend. Albarn remembers the pair were lazing around watching TV one afternoon, letting the answering machine pick up any messages. When a couple of their heroes rang up to enquire about future house parties, Albarn delightedly recounts, “F-cking Pete Townshend and David Bowie are leaving messages and we’re ignoring them!”

I was fortunate enough to interview both Albarn and Hewlett ahead of Gorillaz’ 2010 Australian tour (I know, right? Unparalleled life highlight!). Hewlett was the second interview subject of these back-to-back phoners and his speaking voice sounds so identical to Albarn’s that I suspected I was being punked. “[Damon] copies my voice,” Hewlett joked when I questioned his identity. “He usually sounds like Daffy Duck when he speaks.” 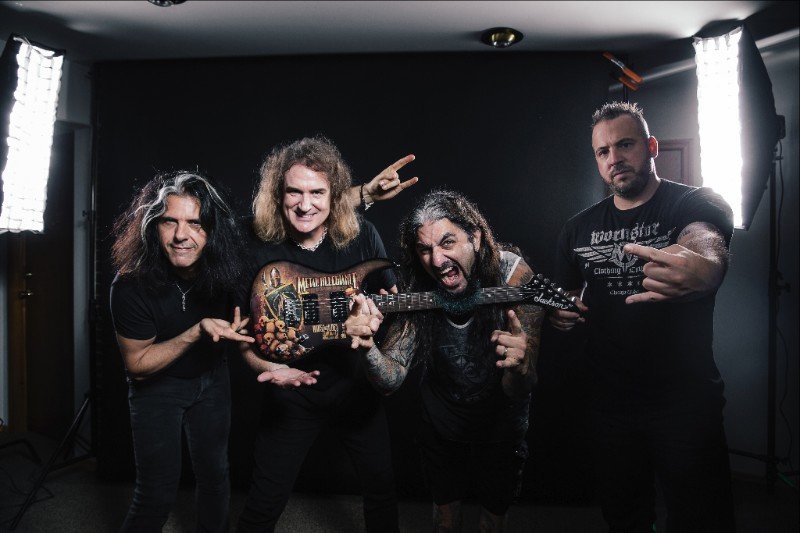 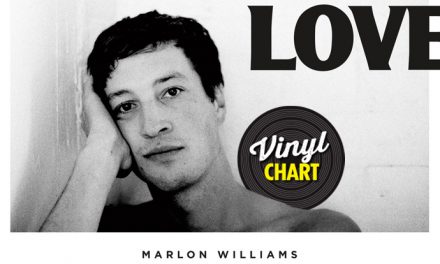 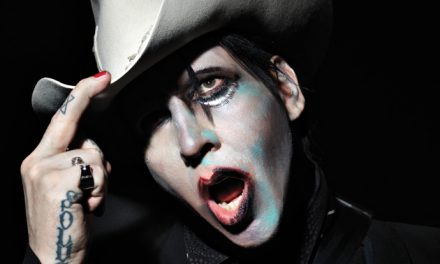 Marilyn Manson, ‘We Are Chaos’ review