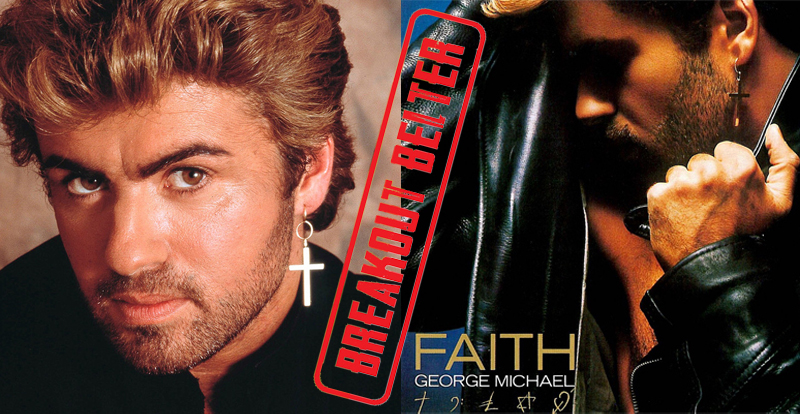 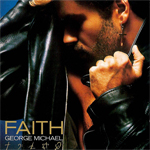 Bryget Chrisfield explores a favourite record which spelled the lift-off to cultural stardom for an important act. This month: George Michael’s Faith (1987).

“The last time we saw [George Michael] was at the London Olympics closing ceremony in 2012, and so that’s 30 years since we first met,” Neil Tennant, one half of Pet Shop Boys, shared during a recent interview conducted by this scribe.

Both PSB and George were amongst the jaw-droppingly awesome roster of talent assembled for A Symphony Of British Music and Tennant remembered the scene backstage was “a bit chaotic”. “We went to our dressing room and everyone was trying to chill out,” Tennant recounted, “and someone in the dressing room next door was playing music incredibly loudly. And I said to our tour manager, ‘Can you go next door and tell them to turn that music down?’ and he said, ‘Well, you know it’s George Michael,’ I said, ‘Well, can you still tell him to turn it down!?’” He laughs and continues: “Then the door flung open and George Michael came in and said, ‘Did you just tell me to turn my music down?’ And I said, ‘Yes I f-cking did!’ And he said, ‘Oh, give me a hug.’ And that was the last time I ever saw him.”

When asked whether George acquiesced, Tennant chuckled, “Oh, actually, what he did was better than that! He had this big ghetto blaster and he went back into the dressing room and played West End Girls really loudly!”

In Robert Steele’s biography Careless Whispers: The Life & Career Of George Michael, George reflected on his post-Wham! headspace: “For a time I didn’t really want to get back into the music business when we finished Wham!. The problem was just that I had developed a character for the outside world that wasn’t me, and I was having to deal with people all the time who thought I was [like that].” George was obviously discussing his Wham! image: bubblegum popstar modelling the shortest of Day-Glo shorts, frosty-blond highlights, a just-back-from-Beefa permatan and blindingly white teeth (long before porcelain veneers were even a thing) while bouncing about like a human swizzle stick doing aerobics.

(Confession: One of 14-year-old Bryget’s VHS tapes containing music videos/interviews from Countdown etc. – remember desperately diving to press record the millisecond your current obsession/s appeared onscreen? – legit wore out at the tail end of Wham!’s Wake Me Up Before You Go-Go film clip, during the ‘saucy George’ section. Oh, you do SO know the bit I mean! “Cuddle up, baby, move in tight/ We’ll go dancing tomorrow night/ It’s cold out there, but it’s warm in bed…” – phwoar, that suggestive eye work!)

After Wham! disbanded, George’s first release was I Knew You Were Waiting (For Me) – a duet he recorded with Aretha Franklin during the final days of Wham! – but it was I Want Your Sex – the lead single from his US Diamond-certified debut solo album, Faith – that heralded the arrival of George Mark 2 in spectacular fashion. The song’s instrumentation is beyond sexy with that bouncy synth riff, rhythmic cowbell and sassy brass. George’s “HURR!”s are more than enough to cause heart-rate spikes while sedentary but, by today’s standards, this song’s message is positively quaint. Probably the raciest lyrics see us questioning the spelling of the fifth word of this lyrical phrase: “I know we can come together…”

I Want Your Sex initially caused a furore following concerns that it promoted promiscuity in the age of AIDS, with the BBC denying the single pre-watershed airplay and producer Trevor Dann scoffing, “You’ve got to be a tosser not to know that that’s going to happen. Write a lyric like that, it’s not going to be played on Radio 1.” But George is on about “one on one” rooting throughout I Want Your Sex! “The most attractive form of sex you can promote is the idea of being totally in love with someone but wanting to rip their clothes off,” he protested. “It really wasn’t as throwaway or irresponsible as they tried to make it out to be, to the extent that the word ‘monogamy’ appeared in the video.”

Co-directed by George and Andy Morahan, said film clip co-starred George’s muse/ girlfriend at the time, Kathy Jeung. The singer’s naked, hairless torso in the video is actually that of body double Chris Bessie since George was deemed too hirsute (and also allegedly not at his most ripped when the shoot was scheduled). After Kirsty Young described his image in the I Want Your Sex video as “very, very heterosexual”, George reminded her that he identified as bisexual back then: “It wasn’t as though it was a complete lie, it’s not that I had stopped having sex with women, but I was already fully aware that – in and of itself – was a lie.”

Michael Lippmann, one of George’s managers, admitted the controversy surrounding this song definitely worked in its favour: “The more radio stations refused to play it, the more people talked about it.” Still, just in case the public’s overreaction to I Want Your Sex spiralled out of control, Lippmann placed the song “in a very safe environment”: on the Beverly Hills Cop II soundtrack. At the start of the film clip for George’s follow-up single, a jukebox plays I Want Your Sex before switching over to Faith, which cleverly kicks off with organ fanfare that borrows the chorus melody from Wham!’s Freedom. Of his look – faded, ripped jeans, cowboy boots, white T-shirt, black leather jacket and aviators – in the Faith video, George opined: “I never considered it a particularly macho look, but I tried to soften it just a bit by having a string of pearls on one of the shoulders of the leather jacket.” The famous Triumph leather jacket worn in the clip originally belonged to Sade’s manager Lee Barrett, who sold the jacket to George.

Faith’s title track, which was composed around a Bo Diddley rockabilly riff, topped the charts in Australia and was 1988’s Stateside #1 single of the year. Since Careless Whisper (Wham!’s pop ballad that proved George was capable of creating sophisticated musical statements prior to his solo output) was 1985’s best-selling single in the US, George became the first recording artist to achieve two Billboard year-end #1s since The Beatles set the standard with I Want To Hold Your Hand (1964) and Hey Jude (1968). George also boasted both the year’s #1 album and #1 single in America, which hadn’t happened since 1970 (Simon & Garfunkel’s Bridge Over Troubled Water plus its title track). He’s the only British male solo artist to rack up four #1 hit singles – Faith, Father Figure, One More Try and Monkey – from the same album on the Billboard Hot 100 and George wrote, arranged and produced all of the songs of Faith (except for Look At Your Hands, which he co-wrote with David Austin).

The first album by a white solo artist to hit #1 on the Billboard Top Black Albums chart, Faith took out 1989’s Album Of The Year Grammy and also cleaned up at the American Music Awards that same year, with George winning every category in which he was nominated: Favourite Male Artist (Rock and Pop), Favourite Album (Soul/R&B) and Favourite Male Artist (Soul/R&B). The look on presenter George Benson’s face after he opened the envelope just prior to announcing the winner of Favourite Album (Soul/R&B) speaks volumes. The black community’s outrage was also immortalised on wax thanks to Help Me Out, the B-side of Public Enemy’s Fight The Power 12”, during which Spike Lee’s voice is sampled addressing Flavor Flav: “Flav, I was watching the American Music Awards – what is George Michael doing there? How’d he win all the awards? How’d he win the R&B category?”

“I didn’t ask to be given those awards,” George stressed. “I’m not going to pretend I wasn’t happy to get them. But I do understand the argument that says that this guy is just an acceptable version of black music for white America.”

George died on Christmas Day 2016, and Tennant sounded audibly upset when acknowledging his peer’s untimely passing during our aforementioned chat: “It really upsets me that George died. It really, really upsets me.”

RIP, Georgios Kyriacos Panayiotou. Thank you for the music. 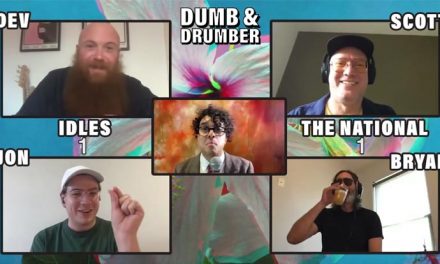 How many drummers does it take to have a quiz show? 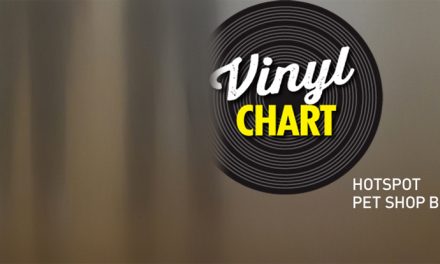 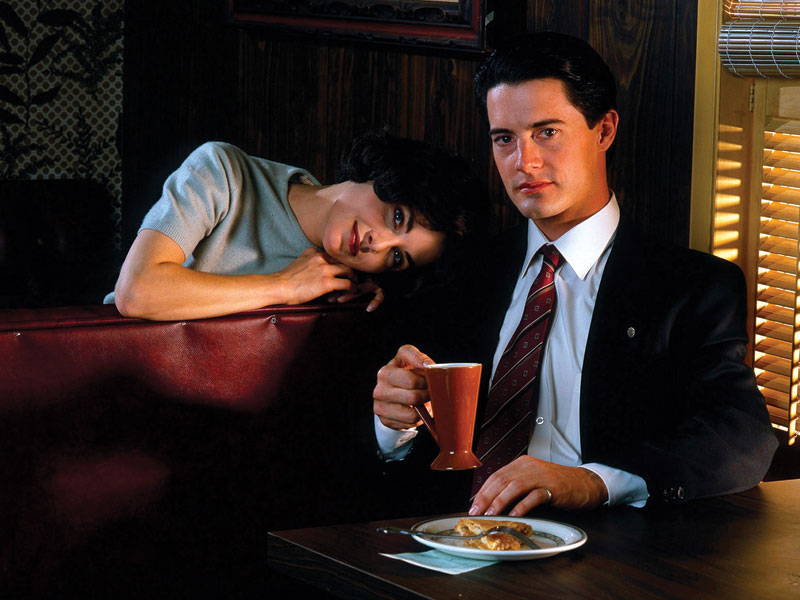 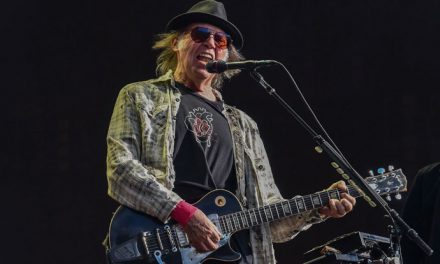