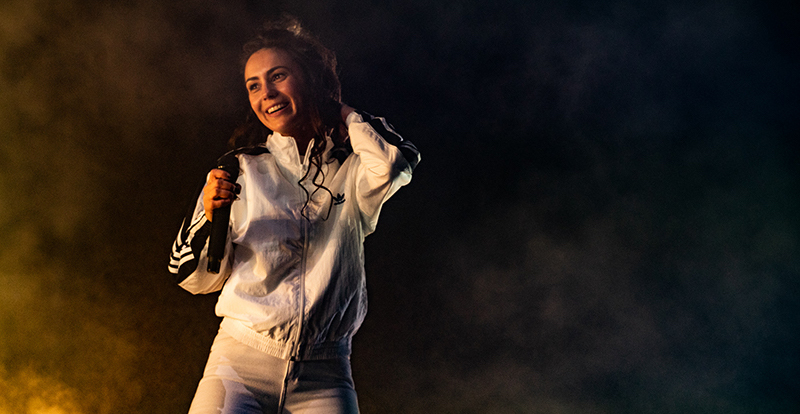 This show would have been highlighted in Amy Shark’s calendar for a while – her first ever arena performance. Playing to a sold-out Margaret Court Arena, 10,000 fans young and old packed into the venue ready to witness the Gold Coast star’s biggest show to date.

Sydney teenagers Erthlings opened to the building crowd; the sweet all-female four-piece impressed with their dreamy shoegaze tunes, with Bridges receiving the best reception in a sign of things to come for the group.

Next out were local punks Slowly Slowly, frontman Ben Stewart making his way to the stage solo to perform Dinosaur before his bandmates joined him for Extinction. Their performance was a distinct change of pace from the preceding act, as the the four-piece bounced their way around stage and their guitars rand throughout the biggest venue they have ever played. “It’s so nice to play a venue this small, we aren’t used to this kind of intimate setting,” Stewart said to a wave of laughs. Playing songs spanning across early EPs and their debut album St. Leonards (read our review here), the group did well to win over the diverse crowd, making gold with their deep lyrics and thrashing riffs.

With a large sheet adorned with her name covering the stage, Amy Shark was illuminated with a spotlight projecting her silhouette across the arena to deafening cheers. As the curtain dropped, Shark’s face lit up at the reception. She launched straight into Blood Brothers and I Got You before grabbing her guitar for Psycho, sans Mark Hoppus, unfortunately – but that didn’t matter, as the talented songwriter’s stage presence commanded undivided attention. The 90-minute set was full of classic Aussie banter, a nod to her talented and loyal band, and of course, the best tracks from her Night Thinker EP and the ARIA Award-winning Love Monster album (read our review here) including The Idiot, Spits On Girls and Drive You Mad.

Leading into closing track All Loved Up, Shark was, as always subtle as a sledgehammer: “Now, I’m supposed to tell you I have one more song to go, but what I am going to do is walk off stage and then you can all chant my name and I’ll come out and play the two biggest songs I’ve written. How does that sound?” The crowd, of course, obliged. True to her word, she returned to deliver Adore and I Said Hi, the latter leaving the crowd bathed in confetti as they headed into the brisk Melbourne winter.

The best part is you can live it all again as she plays a second and final show at the venue on May 31st. Grab a ticket here!

Catch up on all of Amy Shark at JB here.