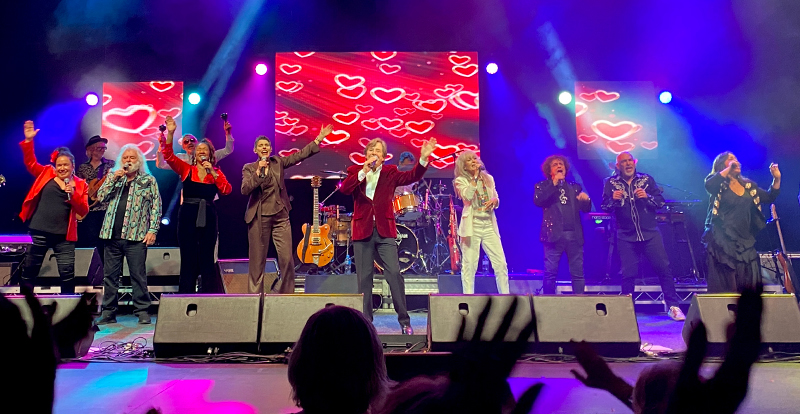 Melbourne’s Apia Good Times date has been rescheduled a whopping four times, but those who held onto their tickets are richly rewarded. The lineup’s collated back-catalogues alone promise a setlist chock-full of legit contenders for inclusion in the Great Australian Songbook. While the incredible backing band remains onstage throughout, rotating all-stars take turns on the mic and this showcase of Australian music royalty – slinging their back-to-back hits live, IRL – equals all killer, no filler. Good times are guaranteed.

Our evening commences and concludes with songs made famous by the legendary Easybeats: John Paul Young, sporting a glorious burgundy velvet jacket and looking ever so dapper, opens proceedings with the rambunctious Friday on My Mind and the entire Apia Good Times ensemble belts out this touring show’s namesake, Good Times, to close. In between, we’re all reminded of that killer key change at the tail end of Yesterday’s Hero – you better BELIEVE there was mass sky-pointing to punctuate yesterday’s ‘YES…’!

Deborah Conway (plus her husband and musical collaborator Willy Zygier on guitar) present an early highlight in Do-Re-Mi’s Man Overboard, despite technical difficulties and a false start. Conway’s mic ain’t working and crowd members helpfully holler, “We can’t hear you!” No momentum is lost however and when Conway belts out, “What am I expected to do?” before silently striking a crucifix pose, we immediately take the bait and chime in en masse: “SHOUT ‘MAN OVERBOARD!’” Conway celebrates this audience participation moment with a gleeful, “YES!”

“Thanks so much for holding onto your tickets, you could’ve got solar heating…” Conway jests. We also very much appreciate this pair’s styling: Conway’s gorgeous monochrome chocolate brown silk look and Zygier’s smart white suit. Later on, when Conway presents It’s Only The Beginning (from her solo catalogue), the song’s shiny, wistful guitar solos call to mind The Cure’s Just Like Heaven. 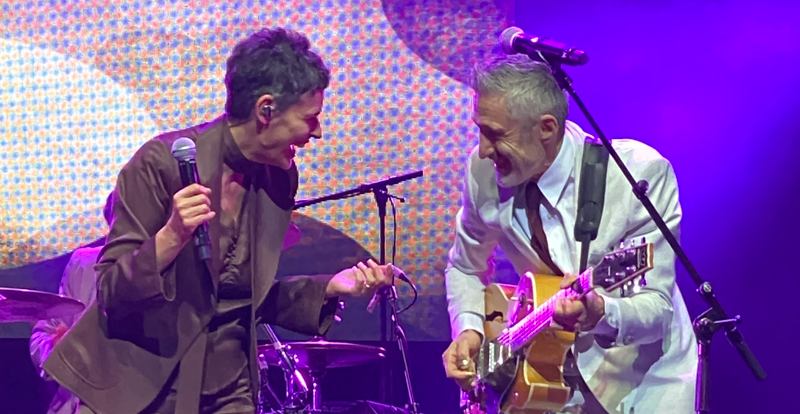 Even the Bull sisters’ fellow Apia Good Times tourmate, the great Brian Cadd, acknowledges the fabulous purple patch Vika & Linda are currently enjoying during what is, undeniably, a hectic time in human history. Following a triumphant 2020 – during which Vika & Linda not only scored their first #1 on the ARIA Albums Chart (with career anthology, ‘Akilotoa) but also released their gospel collection Sunday (The Gospel According To Iso), which debuted at #2 – this much-loved vocal duo’s first album of original material in 19 years, aptly titled The Wait, peaked at #2. 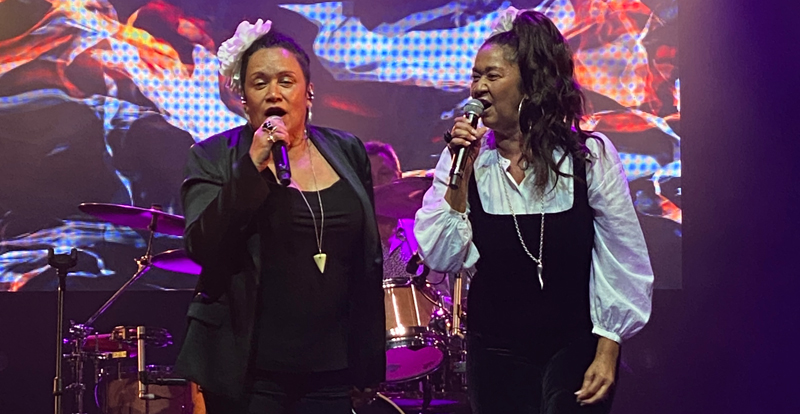 To present The Black Sorrows material, Joe Camilleri is welcomed to the stage alongside the sisters who rose to prominence as backing singers in this band. Brandishing his hot pink sax and regularly flashing those blinding pearly whites, Camilleri chews gum constantly and boasts undeniable swagger. Much to our extreme delight, The Black Sorrows’ Never Let Me Go features Vika on lead vocals while Linda expertly supplies BVs and plays tamba. When Vika sneaks in one final, rapidfire “Never-let-me-go!” – piercing in volume and served with trademark grit – we’re wowed by her power.

V&L’s rendition of Feeling Good is right up there with Nina Simone’s version (no sh-t!), but the night’s top show-stopping moment arrives with The Black Sorrows’ Chained To The Wheel. The ease and chemistry on display as Vika and Camilleri trade verses, in duet mode, is undeniable. Just add Sayer on harmonica and it’s a party. Vika & Linda exude pure joy, which is infectious to say the least. Is it possible they’re shining even brighter this evening than last time we caught them live? How is that even possible!?

After the luminescent Kate Ceberano admits Leo Sayer was a childhood crush, the English (but now Australia-based) singer shares a fun fact: he was born on the same day, in the same year, as Joe Camilleri – does that make them astrological bros or something?

Resplendent with trademark barnet of woolly, (suspiciously) jet-black curls, Sayer performs the soothing When I Need You (backed by Ceberano and Wendy Matthews). The following lyrics jump out, underlined furiously in this reviewer’s mind and filed under ‘so relevant right now’: “Miles and miles of empty space in between us/ A telephone can’t take the place of your smile…” – preach! It really is all about IRL experiences with our nearest and dearest, we’ve come to realise.

Gotta hand it to Sayer for presenting our literal cue to be upstanding and bust a move via his jubilant banger You Make Me Feel Like Dancing, as well. During this deadset R&B classic, Dad (my lucky +1) momentarily stops dancing and leans in to opine, “He really can’t” (re: Leo’s dancing). 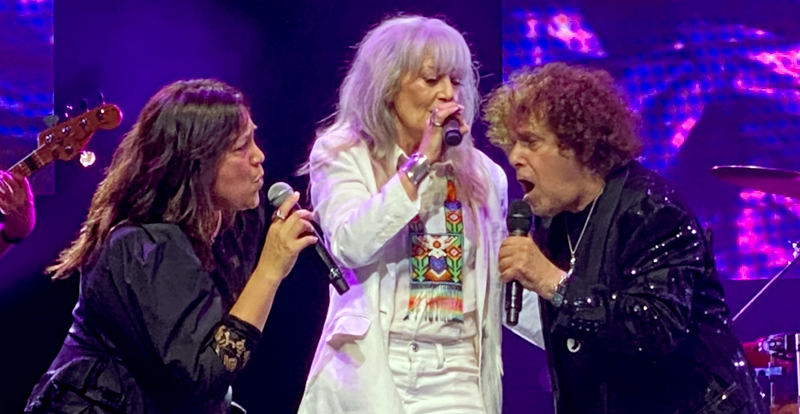 Brian Cadd sincerely admits he could think of no better way to celebrate his 75th birthday (it’s today!) than sharing the stage with this divine selection of Apia Good Times all-stars and performing for us all. Cadd resembles a blissed-out wizard, perched on a stool and playing keys as rainbow-coloured sunbeams on the giant screen behind him appear to radiate from his very being. A Little Ray Of Sunshine – with JPY also supplying vocals – settles over the audience like a mist of optimism and everything suddenly feels right with the world. 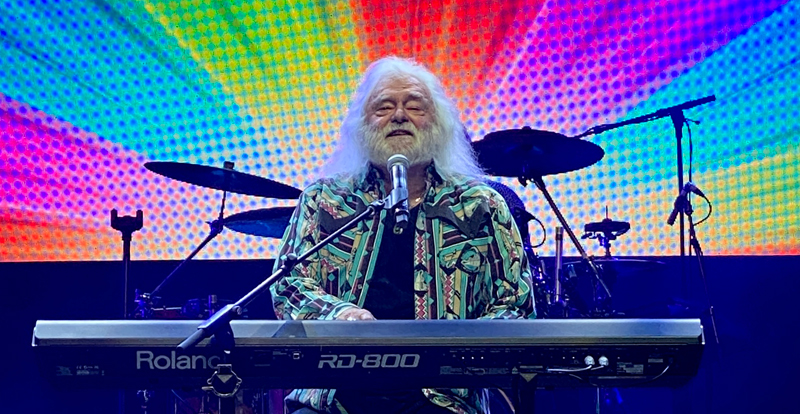 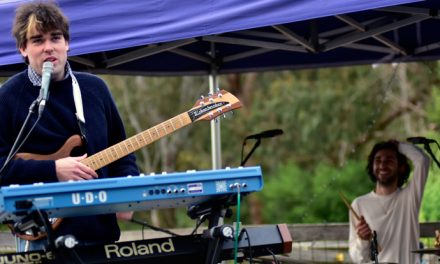 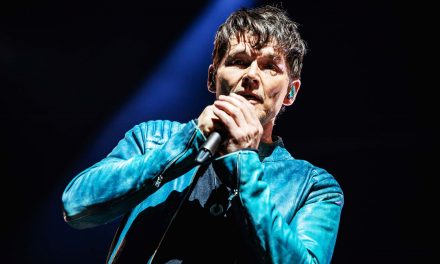 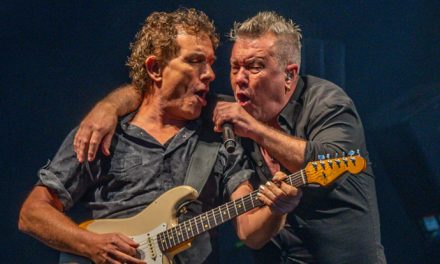 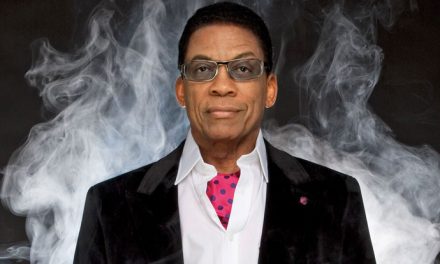