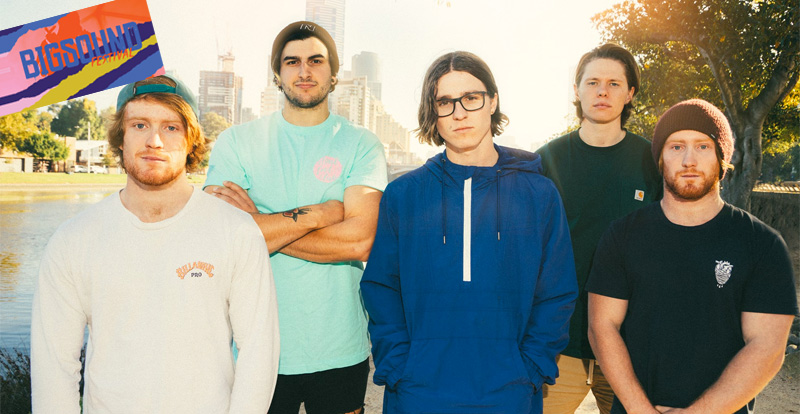 The ‘Aussie SXSW’ – also known as BIGSOUND – is upon us in QLD’s Fortitude Valley from September 4-7, 2018. In the lead-up, we’re taking a look at some of the most promising names who’ll be appearing at the conference and festival.

Buoyed by signing to hardcore heavyweights Hopeless Records and the release of their debut album Everything Is Temporary, Melbourne punk five-piece Between You & Me are ticking a lot of boxes at the moment.

What sets your music apart?

I guess on the surface, you may brand us a typical ‘pop-punk’ band, but we definitely like to push the genre boundaries with our technicality, layering and song structures. As bandmembers, our vastly different music influences drive our diverse music writing – if you listen to our debut album Everything Is Temporary, that‘ll shine through. Whilst attempting to maintain a cohesive music piece, we think there’s a song on there for everyone.

Which movie scene would your latest single suit?

Whilst not quite movie scenes, in the early 00’s pop-punk songs were prevalent in all of those teenage soaps. Our latest single Friends From 96 is a bit of a mellow tune, so it’d fit right in for a scene in One Tree Hill or Dawson’s Creek.

Give us your best useless fact.

Male seahorses can give birth.

What can we expect from you at BIGSOUND next month?

A sweaty, high energy set with bad jokes between songs. We come to BIGSOUND of the back of our first ever tour of Japan, so also expect some lessons in Japanese. Finally, last time we played at Crowbar, Jake Swanton [vocalist] bombed into the crowd and got dropped onto his head and concussed himself – so you know what not to expect.

Which BIGSOUND acts are you looking forward to seeing?

Again, our music interests are quite diverse and there a bunch of amazing bands performing this year. I guess we’re really keen to see some bands we’ve not seen live before. Some of the lads are looking forward to Windwaker because the technicality and musicianship of that band is top notch. Some others include Pinkish Blu, A. Swayze & The Ghosts, Slowly Slowly and Bad Juju.

What are you working on at the moment? Plans for the near future?

We are planning to spend as much time as possible touring [Everything Is Temporary] over the next 12 months. We are currently preparing for our album headline tour which kicks off in Japan at the end of August and is backed up with a tour around the east coast of Australia (after BIGSOUND of course!). Following that, we are heading to the USA and Canada for five weeks to tour with some other awesome bands. We plan to keep writing new music in this time also.

For fans of: State Champs, Set Your Goals, Knucklepuck.

Between You & Me play Crowbar Black on Wednesday Sept 5 and Thursday Sept 6.
Head here for the full BIGSOUND schedule.