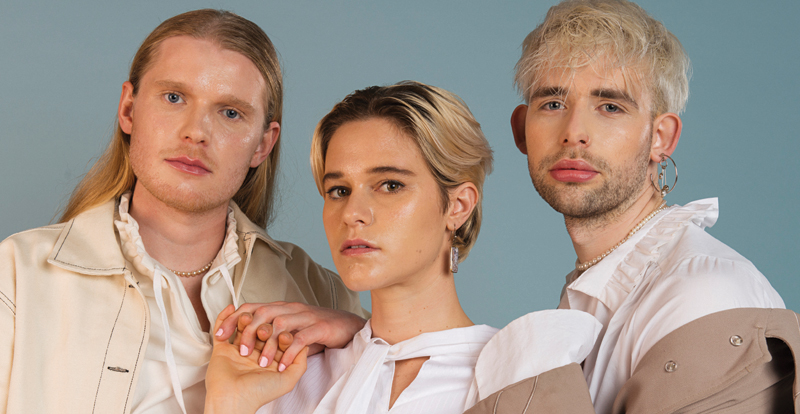 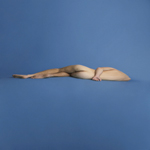 The three of you are each extremely accomplished in your own rights, with many passions which are discrete from and intersect with your bandmates. On the most basic level, what unites Huntly?

Whilst we originally bonded over a desire to make weird(ish) electronic pop, we have since become incredibly intertwined in each other’s lives. Working together so closely through our twenties meant a lot of learning, growing and supporting one another. We’ve been there through each other’s uni crises, sharehouse crises, existential crises, and of course crises of the heart – plenty of watching each other get dumped and be heartbroken. As collaborators, we’ve developed a willingness to share ourselves and be vulnerable with one another, whilst also recognising that sometimes one person’s voice is more important than another’s. We’ve learnt a lot together (and from each other) about our place in the world over the years. As a band we really strive to understand and use our structural privilege to respond to the changes that we think need to be made in the music industry and greater society. We’ve also all been there for each other as we shaved our heads (minus Andy of course).

The album starts with SMU, which itself starts with a mash of sounds, some from across the album (most notably the title track). Why did you want to open the record this way?

The way in which this album opens is very deliberate. I’d like to think this initial rush of sounds is akin to us throwing the listener into the deep end, into our sonic world. You can hear the sounds of the album, and the sounds of us making the album in the first few seconds (and Andy’s voice makes its only appearance of the album). We wanted the start and end of the project to speak to each other in some way. As Elly sings on this track, this is a “project of documentation.” Written almost as a manifesto for the project, these words convey both our own, intimate personal relationship, as well as setting up our relationship with the listener. We wanted the production on the track run with this idea too. For us to sample and re-interpret sounds from across the album you’re about to hear, it’s like the listener gaining an insight. You can hear us constantly re-hashing, re-interpreting and reframing our conversations against the lyrics.

Most of the vocals on Vitamin are pitched down; Elspeth, does it take some shift in perspective to become comfortable with hearing/ enjoying your own voice in this way?

Elspeth: Quite the opposite for me – it takes restraint to sing in only one register! I love the intimacy and physicality of the voice as our body’s own musical instrument, and I love experimenting with what it can do. As a gender queer person I’m also fascinated with the ways music in general allows for different ways of presenting and expressing identity. I enjoy exploring and reminding myself that gender isn’t something that’s expressed through our body’s biological function.

Wait has this strangely floating breakbeat that moves in and out of view, and sudden drum fills that don’t lead anywhere, and things that rise into focus and then immediately fall away. It’s super intriguing. Was it difficult to compose, because of having to hold back?

Charlie: I wouldn’t say it was difficult to hold back, actually. I would keep it going forever if I could (huhuhu). The original demo of this song was about 10 minutes of almost just piano and vocals, so it took a lot of trust to be able to add other parts to it and build from there. For me, it was all about tension. It’s about silence, and the voice. The words of the song imagine a dream parable in which I am present at the point of colonisation of this country, tied to key moments in my family’s history. It tackles the idea of being disembodied with history, so the strange, floating nature of the breaks and erratic movement of the song are key to the feeling. It was important to keep that tension as long as we could.

In the Wiggle clip, near the beginning when Elspeth is hanging on the rings, is she actually standing normally (arms down) but someone out of view is holding her sleeves up? (This question has been driving me crazy since the clip first came out!)

Elspeth: I’m hanging! And it was a NIGHTMARE to film – I had no idea how little upper body strength I had until I had to hang on those rings for five seconds! Each time we did a take, I would hang on for as long as I could before the crew had to come catch me, otherwise I would fall and stab those thigh-high snakeskin heels through the gymnasium carpet (lol).

Low Grade Buzz is out March 15 via Barely Dressed Records.