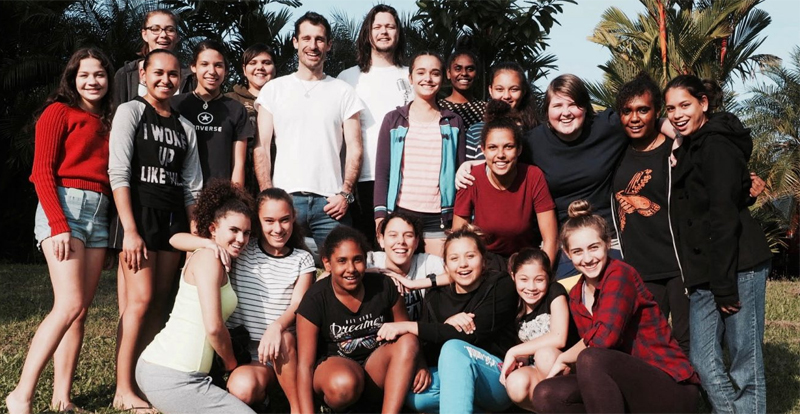 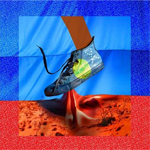 A spray of gravel across the dirt, the bounce of a basketball in play, the metallic clacking of heavy train wheels across weathered rails; all these sounds and many more are skilfully folded with the ineffably beautiful voices of the Indigenous girls’ choir Marliya, in the new electronica project from The Cat Empire’s Felix Riebl and Ollie McGill: Spinifex Gum.

“It was a case of following the music,” Riebl explains of the astonishing album he pieced together over several trips into the Pilbara region in the north of Western Australia. “It’s a very artistically unique project insofar as I went over there with very few expectations. A lot of doubt as well – or apprehensions, anyway – about where I stood in this landscape… what I was justified in writing about. But the only way I could grapple with that was by following the sounds, if that makes sense, and following the stories after that.

There’s such a particular energy in a group like that; they’re always poised on the threshold of something

“To write for a teenage choir is something really special – that in itself is a kind of inspiration as well, because there’s such a particular energy in a group like that,” he says. “They’re always poised on the threshold of something, like they’re about to laugh or about to cry or about to say something strange.” The choir, called Marliya (which means ‘bush honey’ in the Yindjibarndi language – it’s a reference to the sweet connection the choir members experience when they sing together, and their friendship) is made up of present and past singers from the Gondwana Children’s Choir, for whom Riebl was initially invited to write a song cycle in 2015. During his visits he began exploring places like Karratha, Tom Price, and Roebourne, becoming increasingly fascinated with the local Indigenous populations, stories and cultures.

One of those stories was of the Malungungu spirit. “It’s this quite interesting creature that is afraid of white people but sort of spooks out black people,” Riebl explains. “If a group of Yindjibarndi people are going down to the river, and they have a white friend, they tend to bring the white friend.” On the track named after the spirit, Ribel enlisted Midnight Oil’s Peter Garrett to play the part of a FIFO worker (‘Fly In, Fly Out’; an acronym for workers in the Pilbara’s remote mines, who are flown in instead of relocated) who is on the verge of a mental collapse – an issue many FIFO workers encounter, as the isolation and long, odd working hours in the mines have historically resulted in alarming numbers of suicides. “Peter Garrett fit in really perfectly,” Riebl says. “He’s so Australian, you know – and I love Midnight Oil and I respect Peter Garrett a lot as an artist. When he came into the studio, he really loved the song, and he was very daring and interested in trying out different things.”

Riebl and McGill also mess around with tempo. Stand-out single with A.B. Original’s Briggs, Locked Up, slows and then accelerates as a snippet of a speech by Senator Patrick Dodson – a Yawuru man from Broome and the former Chairman of the Council for Aboriginal Reconciliation – begins. In the wonderful Gawarliwarli, (the beat of which Riebl created by looping the sound of kids running across a metal grate backstage of a Gondwana Children’s Choir performance at the Roebourne Ampitheatre), Marliya sing the line “Don’t stop me here now”, which steps resolutely up in pitch with each word. Riebl admits this moment is a reference to Queen’s Don’t Stop Me Now. “To me, that’s a direct quote,” he smiles. “I just wanted that song to have that sense of excitement and movement that the Queen song does.”

The pacing changes which appear on Locked Up, as well as the title track and the protest track Ms Dhu (which is dedicated to and named after the 22-year-old Aboriginal woman who died while in police custody in 2014, and her family), Riebl says were experiments in creating dynamism. “I think we wanted to bend, and give that feeling of stretching, as much as we could,” he says. “We really wanted to be as creative as we could be with this electronic medium. As much as people can read into this album and say it’s quite political, very topical… our goal for this album was: how can we make these things as fun as they possibly can be? How can we challenge [the girls]? How can we do something really different with this choir?

“There’s been a lot of things fall into place, which has made us feel as if this is a project worth pursuing in an artistic sense, if nothing else, because it just felt right,” he says. “You get these rare moments in your musical career where things just feel right. Sometimes you’ve got to force them but sometimes they just fall in. And on this project, I think, that happened quite a bit.”

Spinifex Gum is out now via My Shore Productions/Kobalt.