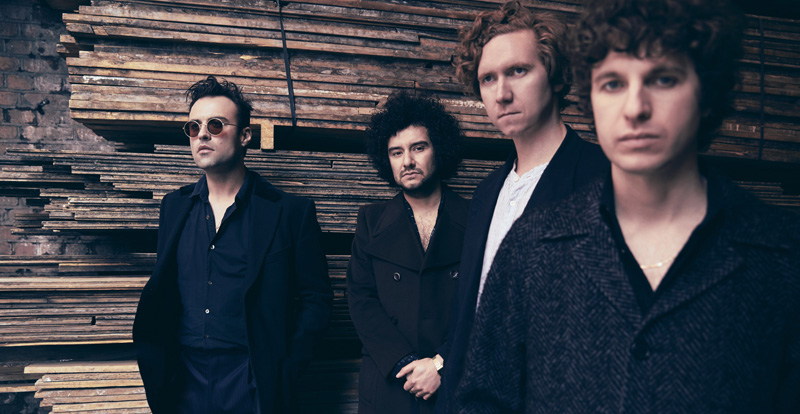 It’s been 12 years since She Moves In Her Own Way. When you listen to that song, is there anything about it which you think the band has made a deliberate effort to retain?

We’ve played that song so many times now. It’s so engrained in my brain – to me it’s like DNA. That song, you know the drum beat with that guitar style, that was just our sound. I think that even though we’re not taking steps back, you know, I think that DNA’s still there. It’s just my songwriting, probably.

You wrote much of the new album in a room with an elephant wallhanging (whose trunk is up, which is good luck). Do you find you write your best stuff when you’re around a particular charm or in a particular environment?

Yeah. Well, I’m actually in that room right now. I’ve got a cool blanket that someone gave me. I’ve got a few little bits of pieces. I’ve got that wall hanging from India, and I kind of like having it around. But, you know, the main thing for me to be honest – aside from [ideas] coming from within yourself, ‘cause that’s really where stuff comes from – I don’t really believe in, ‘Oh, you go to another country and you get inspired’ or whatever.

I think it’s guitars, you know, for me. It’s guitars I have a real affinity with – about three or four of the guitars I have, I just always feel good when I pick them up. I feel ready to do something fabulously great, so they hold quite a lot of weight for me even though they’re just wooden objects with strings. They have character. I’ve got a guitar that I’ve written 20 songs on, that are out there, and that feels good. Then I kind of threw that away on the fourth album – I just said, right, I’m going to work with this 22-year-old producer. I’ll use, a $150 electric guitar, and it’s all new and it’s all on the computer. But [Let’s Go Sunshine] is back to my roots.

Intro is a bunch of people singing the chorus to No Pressure – it’s quite the bookend, considering No Pressure, the full track, is the last in the tracklist and that it also ends with this singalong. Where did you record it?

It was the last day of recording in the studio, and it was sung in a place full of art in LA. Basically, we had all of our friends and a few family members and stuff. I’d written No Pressure probably a week before we finished the album. It wasn’t meant to be on the album, but we did it on the last night. The recording ended up being the second take. All our mates were there, so we were basically just having a drink and singing along. It was just a cool feeling. I think it sets up the album, for what it’s about. Not to be corny, but it’s meant to make you feel good – and it does have its up and downs, but that’s where the beauty is. Of course, [Intro] kicks right into Kids – which is the most angsty song on the record – but it sets you up going, right, this is a record to put on and feel good. That’s all we’re trying to do; that was our intent, I think.

Kids is definitely discontented – the key chorus lyric riffs on The Who with “The kids are not alright.” Why do you feel the kids aren’t okay?

It’s the frustration of our generation of picking up the tab for the baby boomers… and also I feel a big swing in [England] – there’s a lot of greed going on. Money is king. Our government does whatever the money tells it to, and all of a sudden it’s okay to say things about immigrants. When did that become okay, do you know what I mean? Obviously we live in different countries but it’s the same. When we were teenagers we thought things would head in the right direction, and they swung the other way. So, you know, it’s my sort of little protest moment. There’s a few other songs that… kind of have a slight protest element.

I really do feel it’s an economic thing, and that’s a worldwide epidemic. I mean, I know it’s the same in Australia. If you’re 30 or a 30-year-odd person and you have a decent job, you’re making 80 grand a year, 100 grand a year, when are you ever going to be able to buy a f-cking house? It’s just not going to happen. You’re a slave. I’m very lucky; I’m not a multi-millionaire but I do well and, you know, I see my really good friends who are f-cking intelligent people, hardworking people, and they’re just like, how are they going to do this? They’ll rent off someone who bought their house for 40 grand like 30 years ago. It’s crazy.

This is not okay. It’s just gotten to this point of greediness. My granddad has this saying: “To those who have, shall be given.” And it seems like we’re living in the age of that.

Four Leaf Clover has a really gorgeously poppy feel but rather morose lyrics. Then there’s a point where you shift scene and it’s a little more mysterious, and then bang – back into popland. How did you write it?

Yeah, I’m happy with that tune. It was a little bit of a conscious nod to some particular journalists who I think are quite lazy with The Kooks in the UK, and can be quite cynical about our band. It’s just that journalist who’s writing all these nasty things about someone who’s actually creating and doing something positive – and they’re just sat in their room, basically bullies, you know? That’s where the song comes from.

Is there a kettle whistling at the start of that track?

We actually recorded that [in] the studio, and it took hours of precision engineering to get that exact sound. Yes, it’s an oldschool kettle.

Let’s Go Sunshine is out August 31 via Lonely Cat/AWAL.