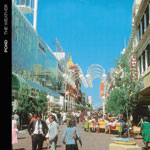 From the first swooping synths of opener 30000 Megatons, Pond’s new album The Weather soars around a brass-dolloped palette of fat bass, electronic sprinkles and analogue details, and a little bit of local Perth wireless.

“The radio static and stuff was deliberate – Kevin [Parker], myself and Nick [Allbrook] put all that in at the very last minute before we sent it to mastering,” says Jay Watson. He’s talking about stand-out Colder Than Ice specifically, which mixes atmospheric synths with a dexterous bassline and an MJ-style shuffling cabassa in the percussion department, and is littered with AM radio newsreader phrases.

“It’s dark, but it’s pretty ridiculous,” Watson continues. “But it’s not really about meth, that’s the other thing – it’s just an entendre. It’s ‘cause we were realising that [a lot of the album] was about Perth. It’s not pro- or anti-, but we were like, ‘We should have a song about meth.’ But it had to be kind of whimsical and a bit silly, because if it was serious it would be terrible. It was the only way I could think of doing it: this schlocky, ‘80s, LA, driving, midnight pop, you know? It’s a weird one.” (It also features Kirin J Callinan in the bridge, in a turn Watson describes as “a kind of creepy, skulking through the suburbs” feel.)

Herein lies the beautiful patchwork nature of Pond. Watson says that not only do they swap demos around – Allbrook will create a melody over Watson’s instrumental; some will go straight onto the computer and are tinkered with from there; some are recorded from scratch in the studio; sometimes they sample from their own previous albums – the roles are also totally fluid. “It’s kind of a free for all between Nick, Joe and myself,” he explains. “We don’t really put the instrumental credits on [the liner notes] because it’s too confusing and hard to remember. We all play everything the whole way through – it’s just whoever’s there. We’re often not all in [the studio] at once. I guess ‘cause we tour so much with other bands, and solo things, that when the time comes to do Pond, we really want to keep it as fun and as interesting as possible.”

The Weather is out May 5 on vinyl and CD via EMI.