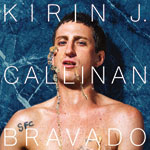 Kirin J. Callinan has always operated on the edge of the rock/mock knife. From his notorious 2013 show at Sugar Mountain Festival, through his astonishing and decorated album of that year, Embracism, across his ongoing flirtation with Instagram’s rules of indecent exposure, his close friendships with the brightest minds in the local and international arts, and his recent mockumentary which featured massive musical icons lamenting his fictional fall from grace… the gently-spoken musician is pushing a personal study in which his musical talent is all gnarled up with a provocative faux-megalomania (just look at that album cover). Now signed to a major label and releasing his second album, Bravado, Callinan spoke to STACK from Sydney.

You and [new label] EMI clearly adore one another. Do they allow you to spread your wings as much as you want?

So far, so good. Personally, I’ve never been more excited with the level of enthusiasm, and thought, and action, and energy being put into it. The other thing is I made the vast majority of the record before signing to EMI. So even if they wanted to, they didn’t have an opportunity to stick their grubby little fingers in the action. I’m joking. But, in all seriousness, I don’t expect that from the next record either, and if they did it would be the best, ’cause I trust everyone there.

In comparison to the guitar-heavy electronica of Embracism, you’ve moved towards these transcendental club moments on Bravado. They’re meaningful bangers, with a sinister edge. Were you inspired by that actual environment?

Have I had immersive club experiences? I’ve dabbled in a little bit of that my whole life, but it was more about taking devices that are used in one style of music […] and reapplying them, re-contextualising them, and kind of twisting the meaning. Using that device in a way that hasn’t been done before, in a way that’s confusing and exciting, hopefully, and original. I was jacked on Swedish House Mafia and David Guetta – the level of production and ambition in those songs. But equally, I was jacked on new country, and then on some of my old favourite bands of all time.

In the way those club moments go from triumphant to eerie, do you think there’s always the chance of something threatening or malevolent emerging in moments of greatness?

I hope so. I think with any good work, if it’s real, it needs to align with the everyday existence we have – that all these things have danger. Speaking of country music earlier, I went and saw one of my favourite country artists Dwight Yoakam last week. After the encore at the end of the show he sort of lifted off his hat just a little bit, and he told everyone to get home safe. And it implied that there was this great danger out on the streets; it was sinister and sexy when he said to get home safe, as well as being genuine and caring. I hope that’s in the songs. I hope that makes sense.

It’s been four years since Embracism – you said you’d written most of Bravado before your signing, but was it big label machinations which delayed it?

[The album] honestly hasn’t changed much since 2014, but that was more to do with the place I was at psychologically, emotionally with it. But in terms of when I’m playing and setting limits on that sort of thing, I was in the studio with [producer] Aaron Cupples, sometimes until the sun was coming up. We were living together as well, so we’d ride our bikes back to his place in London along the canal, and get home and talk about the record more and fall asleep and wake up and continue the conversation, and then ride our bikes along the canal back into the studio. Seven days a week, for months on end. We were so absorbed in it, which was cool, but it’s easy to get lost in there as well. I think that’s part of the reason it’s such a strange record, which for me has no obvious touchstones. We just went down the hole really deep.

The lyrics on Down 2 Hang are absolutely stand-out – you’ve thought of every possible interpretation of the word ‘hang’ and woven some grody poetry. How did it come together?

I was bored, on tour. I think I got a message from a beautiful girl in New Zealand who I’d been flirting with online; she wrote to me and said she was ‘down to hang.’ And I just got thinking about other things that are down to hang… it went all the way from a peking duck to Jesus.

In Family Home there’s a little melodic plonking noise – it reminds me of John Farnham’s A Touch of Paradise. What is that effect?

I know what you’re talking about – that’s my mouth. I was sort of beat boxing a little bit, but I’m also doing this spatial, three-dimensional chopped up guitar thing, which is rhythmic as well. So it might sound a little more foreign than just a human voice.

There are several amazing guests on the album – the Finn family, Weyes Blood, Alex Cameron, Jorge Elbrecht, Jimmy Barnes, Connan Mockasin. Your good pal Mac DeMarco even has a credit on Friend of Lindy Morrison, but there’s no obvious sign of him. Where is he?

Yeah, he does feature on there. The truth is I was with him a couple of weeks ago. I showed him the album artwork and he started looking through the credits and he was like, “Where the f-ck am I?” – which is him being really funny. He sings a small backing vocal on there. I was like, “Sure, I’ll give you that.” At the same time, I do feel a little conflicted, mainly because Natalie – Weyes Blood – sings a beautiful duet with me on the record and I don’t want it to take away from her! But, for the record, he sings the Michael Jackson backing vocal in the final chorus. It was throughout the song but I deleted it except for the final time it happens, just because I knew he’d be very upset if I didn’t put him on there.

Bravado is out June 9 via EMI.