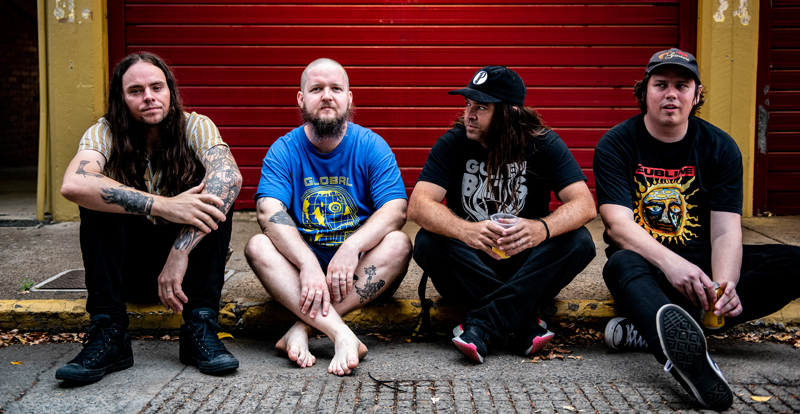 Violent Soho explain that billboard, and new LP ‘Everything Is A-OK’ 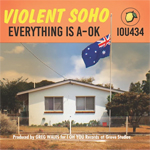 After 16+ years as a band, James Tidswell is super-stoked to hear that Violent Soho‘s new album reads as quietly confident. Relax! It‘ll still blow your faces off beyond the smartest of smartphones’ Face ID!

In the lead-up to the release of their fifth album, Everything Is A-OK, Violent Soho headed to Mansfield – the Brisbane suburb where they grew up and formed this band – to visit the house that appears on the front cover. “We went back and then filmed ourselves playing out the front of the house,“ guitarist James Tidswell reveals. “The owner – that‘s Ken, and he’s 83 years old – sat and watched us, with his wife. We actually got that house on the front cover because my daughter was on school holidays – and so I was looking after her – and Luke [Boerdam], our singer, had seen this house and was like, ‘That‘s the perfect house!’ So I went up with my daughter and knocked on the door and just said, ‘I play in a band and could we use a photo of your house on our album cover?’ And he‘s like, ‘Yep!’

“It was pretty fun playing a song full-pelt to Ken and his wife on their front lawn,” he adds. “They had, like, little lawn chairs.” So how did Ken react when they experienced Violent Soho live, up close and personal? “Um, well he put his fingers in his ears while we we playing,” Tidswell laughs.

After several spins of Everything Is A-OK, we can attest to the fact that Violent Soho have definitely still got it in spades but there’s more dynamic variety throughout this one, which really makes those unhinged moments count. “We don’t have the same sort of anxiety, I guess,” Tidswell considers, “or aggression, you know? We’d like to think that it really sits back into itself rather than what we’ve always done in the past, which is pushing it as hard as it can possibly go. I think now we just sorta sit back and let the music itself do the talking.”

So true! There’s a quiet confidence to this set as a whole. “Wow. I’m so grateful to hear you say that, because I think that is where we’re at after being a band for 16 years, or more. And I guess that’s why it took a little while, because we were just making sure that we were staying 100% true, in the growth also… We’re certainly not as angry as we might’ve once been,” he laughs.

An early teaser of new material from the band arrived via some song lyrics (“There’s a Baby Boomer across the street and it won’t stop staring at me”) – which were attributed to Violent Soho – emblazoned across a Punt Road, Melbourne billboard in November last year. When asked who came up with this brilliant idea, Tidswell reveals it was Johann Ponniah, founder of their record label I Oh You. “I think that was the first song written for the album,” he deduces of Vacation Forever, the second single to be lifted from their upcoming record. “And we sent it to Johann and he came back just loving it and he was like, ‘This line is just awesome!’… So he booked [the billboard] in – it was all set up – and then the day before it went up, that ‘OK Boomer’ thing started trending on the internet!” he laughs. “Like, it was booked in a year and a half before the billboard went up; you can‘t buy a billboard and get it up the next day. It was by no means as thought-out as what it might’ve seemed. It really spun me out.”

Violent Soho collected two ARIA Awards for their previous album, 2016’s Gold-certified WACO, and (somewhat hilariously) were not actually in the room when the Best Group envelope was opened and they were announced as the winner! Turns out they were already downstairs downing beers to celebrate their victory in the Best Rock Album category! Is that the most Spinal Tap moment Violent Soho have ever experienced? “You know, being in a band just is Spinal Tap,” Tidswell proclaims, “whether it’s walking to the stage and you can‘t get there ‘cause you get lost on the way, or you‘re winning awards and you‘re not in the room to get them. I mean, I must say we were coming from a place of, ‘As if we‘re gonna win it,’ you know? It wasn’t coming from a place of not being bothered. We just looked at [the list of nominees] and we were like, ‘Statistically, that’s impossible. And we’ve already got one. So isn’t that awesome!‘“

In Violent Soho’s defence, they had also just nailed their live performance of Like Soda at the ceremony, wanted to celebrate how well it went down and simply couldn’t imagine their night could get any better. “That’s exactly what happened!” Tidswell extols.

But now that members of Violent Soho have kids, they‘re no longer making music in isolation and have other little humans to consider. “It makes things a lot more fun,” Tidswell enthuses. “Playing in a band, you know, strange things happen, but probably one of the craziest moments of my entire life – my entire life, I’d have to say – was when we were playing on stage at Good Things [festival] and I looked over and saw Mark Hoppus, from my favourite band blink-182, like, filming us playing. And then I looked over and saw my daughter, who then waved to Mark Hoppus who waved back to her! It was like, ‘Wow, this is a trip!'”

Violent Soho continue to spruik their hometown, essentially putting Mansfield on the map. Does it feel good that the local community seem to be proud of what this band has achieved? “It’s surprising,“ he hesitates. “It seemed impossible for anyone to do what we decided to try and attempt, and the fact that it sorta happened and, now people know about it in Mansfield, is pretty cool.“

Everything Is A-OK by Violent Soho is out April 3 via I OH YOU. 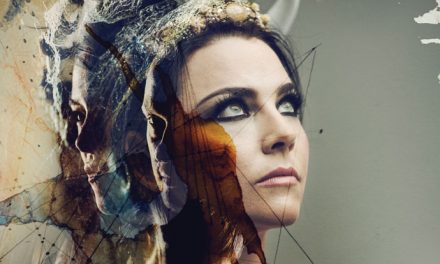 Q&A with Amy Lee of Evanescence